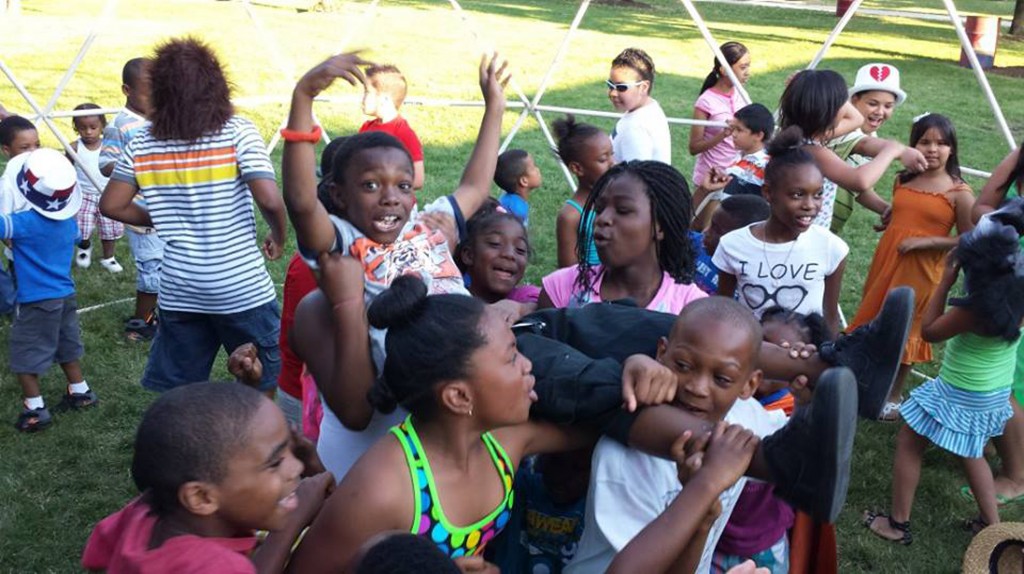 “We’re telling the real story… we see this stuff. We’re telling the grown-ups what’s really happening, the adults don’t really know. That’s because most of the violence that’s going on is with the youth.” So says Monique, a young performer explaining how she and the other nearly two dozen ethnically diverse local teen girls (and one white teen boy, see below) contribute to the upcoming Collaboraction/Chicago Park District theatrical event “Crime Scene Chicago: Let Hope Rise 2014.” The teens comprise the Crime Scene Youth Ensemble, key participants in the multifaceted “touring theatrical reaction to violent crime in Chicago” which unfolds over a month, starting at Collaboraction’s Wicker Park space and touring to a quartet of Park District venues over four subsequent weekends.

The kids are focused when rehearsing the production, and very serious afterwards when discussing the city’s infamous epidemic of violence. But they exhibit much humor as well, as when I ask Sava, the sole male (and white) in the teen’s show, if it’s a little heavy having to represent The Man. “No, I have more opportunities!” he immediately exclaims. To which a chorus of girls replies with variations of “We can be white males, too!” Though a humorous aside in our conversation, it’s their funny acknowledgment of the sort of relevant, historical inequality the adults mounting this production also point to, thought without such innocent levity.

Providing an overview of significant violent moments in Chicago’s history and an assortment of viewpoints on how the citizenry chooses to deal—or not deal—with the seemingly constant threat of violence afflicting certain parts of town, the youth performance will be featured for four nights at Collaboraction. Following the younger team, an equally ethnically diverse (and more gender-balanced) adult cast tackles the same issue and hints at the limitations of traditional broadcast media while centering on the opportunities presented by internet communications in raising awareness and developing solutions. A few days later, after another violent summer weekend here in Chicago, I spoke with Collaboraction artistic director Anthony Moseley about his hopes for the event, with an emphasis on the Park District dates.

The show was first produced at the Collaboraction space in 2013, and the company took it to the parks later last year. Now in its second season, the city’s Night Out In The Parks program again showcases “Crime Scene,” albeit a newly revised edition. Collaboraction is continually updating the show to include up-to-the-minute and “hyper-local” stories of Chicago violence tailored to each venue, and the representation of crime in this year’s “Crime Scene” has shifted from the action to the aftermath.

“The first show was really a punch to the heart and gut,” explains Moseley. “We wanted to wake up… our core audience, which was diverse but very white still and very middle-to-upper class, or hipster. We wanted to use theater as a way to recondition people to this violence.” Moseley himself felt desensitized to all the violence until a series of crimes directly affected him and those around him. “Theater can allow people to feel that, without having that violence happen. We’re a great city with friendly, wonderful people who are not sympathetic to the point of action for our fellow Chicagoans who are suffering from years of economic disparity. And then we got asked to take it to the neighborhoods. We didn’t need to wake the neighborhoods up, they were already awake. We wanted to bring them a sense that we see and understand what’s going on in the city and that there are many people doing great work and risking their lives—for no reason other than love—to try to turn around the city and that perhaps what we need is a communication that the arts can provide.” 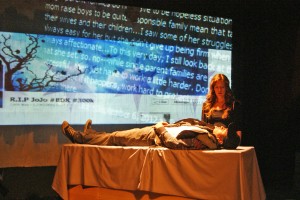 Chicago Park District program & event coordinator Samantha Chavis praises Collaboraction as a “partner and friend” of the Park District. “They really want to jump right in and not take the easy way out. And not attempt to solve or address the whole problem, but just sort of take it apart and look at different aspects of it and really do the work from the perspective of historical context, to law enforcement, to community leaders, to perpetrators, victims, people that have come full circle, peacekeepers in and around Chicago.”

While only the Flat Iron performances feature the full youth ensemble, there’s ample activity taking place at the Park District events. Thursday nights include pre-show “peace rallies” featuring local artists and community groups, a “Crime Scene” performance, and a town-hall discussion. Friday night activities start earlier, adding a free community BBQ and a dance battle staged inside a geodesic dome. Moseley: “The show itself is not the focus; the show is a catalyst for the town-hall discussion that happens after the show. Our vision is to focus the art-making on the experience of the person in the seat, really ask ourselves why have we gathered these people, and what effect or questions do we want to plant in their psyche and in their soul.” These town-hall discussions include neighborhood peace movement organizers on a panel with Moseley. On Fridays, community partners will be joining in at the park location “setting up tables to tell our audience about programs they offer. After town hall, everybody hangs out for another half hour, and a cool thing happens:  people start exchanging business cards…. there have been partnerships, and volunteers, and donors, that have been cultivated out of those town-hall discussions. Just imagine if we can get thirty, forty, fifty percent of the city to become part of the solution.”

Chavis sees the sort of discussion and interaction facilitated by “Crime Scene” as part of the solution. “I think violence in Chicago affects every single citizen of the city. It’s about raising awareness, bringing communities together, sharing stories, and sharing resources. We as a park district divide the city into three regions: North, Central, and South. This year specifically it was important both to Anthony at Collaboraction and also to us to share these stories with our three regions and not isolate it to the South and West Sides. We’d love for people locally within these neighborhoods to come and see the work, and we also feel it’s an opportunity for folks that have never visited these neighborhoods to come and check them out and see that there are real folks doing their thing, living their lives, and that there’s a lot of beauty to that.”