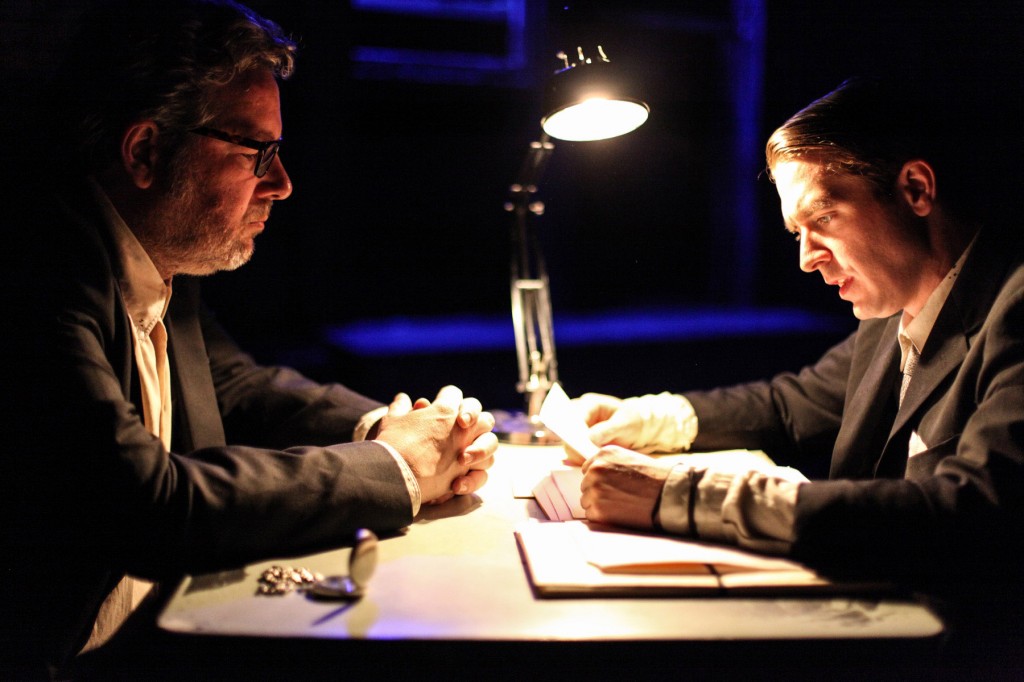 Samuel Beckett was a genius, one of the great talents of the twentieth century, like Ernie Kovacs or Thelonious Monk. So when a theater company does a fine job staging some Beckett, where do I get off saying much more than thanks? Beyond offering Mary-Arrchie Theatre my gratitude for mounting six fairly short, very Beckett pieces in one quick evening, I offer you—the reader and perhaps a genius in your own right—the following details. If you read these things for recommendations, I recommend you skip my review and just go to the show. Simple enough. You’re welcome.

“Hellish Half-Light,” named for a line in the sixth and most technical of these miserable marvels, strings the works together seamlessly, as if they were written to be performed in this order. Director Jennifer Markowitz has sequenced the pieces so effectively that their combined presentation has a rhythm that matches Beckett’s own merciless yet intoxicating cadence. These brief pieces succinctly distill Beckett’s bleak outlook on life while emphasizing the humor, making this barely hour-and-a-half presentation a treat for fans of Beckett and also a great introduction for those familiar only with the title of his most famous play. Those who disdain Beckett will suffer as much as any of the multiple characters each member of this adept cast portrays.

It’s six stars for six shorts, and the sextet of Molly Fisher, Rudy Galvan, Lauren Guglielmello, Adam Soule, Stephen Walker and Kathrynne Wolf inhabit the difficult realm of these pieces without flinching. “Rough for Theatre I” trots out a pair blinded or crippled by love—and whatever else we bother with—pathetically and selfishly trying to make use of whatever’s left of each other. “Come & Go” (the shortest of these pieces if my internal clock’s worth a damn) demonstrates that even in the absence of what we might prefer to bind us, we can always find horrible reasons to stay connected. “Rough for Theatre II” (the longest per my infernal sense of time) provides perhaps the most narrative experience; a pair of bureaucrats (Soule and Walker) audits the life of a pending suicide from oppositional points of view. The less considerate of the two (Soule) is also the more fearful, in a hurry to let their subject jump from the window not only out of callousness toward that man’s potential but also out of his own uneasiness. The staging has a noirish quality, while the reliance on malfunctioning desk lamps for comic effect is pretty much slapstick. Ironically, at the performance I saw, there were some presumably unintentional malfunctions with an even earlier manmade means of illumination. Pivotal matchsticks wouldn’t light, a situation Walker handled with appropriate disregard. In the short time span of “Catastrophe” one human manipulates another in obedience to a third who rules them both. This segues nicely into “What Where” wherein seasons pass as four (or is it five?) characters take turns, one by one, torturing each other. Even more pronounced than with “Rough for Theatre II,” the interplay of rapid lighting cues and perfectly timed delivery from the cast are essential to the success of “Play.” In this final piece, the escalating sense of usurped autonomy building through the previous two shorts comes to (pun alert) a head. Three members of a love triangle, only their heads exposed as they are otherwise encased in impressively crafted giant urns, are tormented by their own guilt. The trio are seemingly trapped, as they are in the urns, into repeating the mundane details of what led them to their current, apparently eternal, barely endurable state.