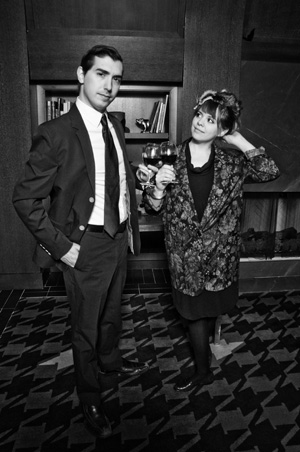 This Hitchcock-themed improv show features not one but two drinking games happening simultaneously. The first is the more familiar audience drinking game. In this case you’re asked to drink every time a pun is spoken, a Hitchcock film title is said or someone is murdered, among other impetuses. The second, and less familiar, is a drinking game that happens on the stage, because the cocktails portion of this punny title includes not just the audience but the actors as well. In this case, the actors are working with a wet bar and are drinking throughout the show with one rule: any time a character is given a drink, he or she must finish it before the scene ends. And these actors love to serve each other.

As can be expected, this leads to some increasingly hit-or-miss comedy bits, with a number of risky endeavors paying off with huge laughs and several others petering out. Studies show that the biphasic curve holds true for the enjoyment of alcohol on an individual level—essentially, you will feel better as your blood alcohol content (BAC) approaches .055 and worse from then on—and so too goes this show.

It kicks off with the cast taking a suggestion of a fear that someone might have (in this case, the wind) and goes from there. The show I saw—“A Stiff Breeze”—started off a little slow, with several solid puns based on the suggestion and a nice setup involving a kept housewife (a bright-eyed Brit Belsheim) and her overbearing weatherman husband (Bruce Philips) unintentionally sheltering a fugitive (CJ Tuor) looking for a place to hide out from pursuing gangsters. Throughout Tuor showed the most skill at dropping puns and maintaining his quick wits as the alcohol intake increased. Even as he physically stumbled in the second act he never dropped a punchline.

The high point in this show happened just after the intermission—perhaps when the actors were reaching that ideal .055 BAC—when Alex Young delivered a hilariously awkward commercial for “Baby Cakes” muffins. It’s highly likely that a sober performer wouldn’t have taken the angle she did, and for moments like that, this setup is ideal. Overall, playing a drinking game is fun for everyone, especially in The Annoyance’s nice new space on Belmont, and this cast works well together delivering laughs, but the nearly 100-minute running time (including an intermission) is too long to sustain a joke built on intoxicated improv. (Zach Freeman)