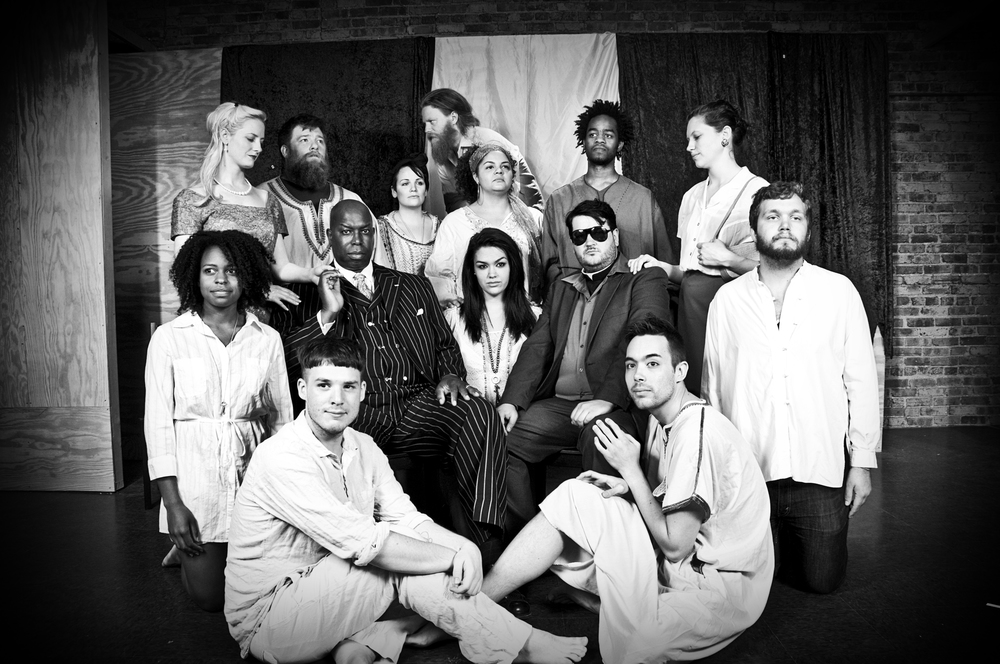 As the saying goes, truth is often stranger than fiction. When it comes to the world of religion, the line between the two (truth and fiction) becomes blurrier and blurrier. And for a large number of figures within various religious frameworks, it can even become impossible to separate truth from fiction, to separate history from mythology, and to separate man from his claims to the mind of the divine.

The Reverend Jim Jones is certainly one of those figures and in this darkly funny little musical currently playing at The Annoyance, with book and lyrics by Charlie McCrackin and peppy music by Lisa McQueen, the blurry origin story of Jim Jones is given a surprisingly robust and unflinching examination.

“You can’t tell a story about Jim Jones that doesn’t end in Jonestown,” says our narrator near the end of this frequently absurdist recounting of a meeting between Jones (a wild-eyed and appropriately harried Paul Jurewicz) and the self-named Reverend Major Jealous Divine (a captivating Greg Hollimon). As written by McCrackin, the crux of the story essentially plays out as the origin story for a supervillain, where we already know that our protagonist’s actions will eventually lead to the deaths of nearly 1,000 people.

“Inspired by true events,” the show imagines Jones traveling to Divine’s religious compound and essentially studying under the elder religious leader to fine-tune his own arts of religious trickery (er, leadership). “It’s not what you say, Brother Jim,” says Hollimon’s deceptively earnest Divine, “It’s how you say it.” From this brief guidance—along with assistance from his constantly overworked and overwhelmed wife (a show-stealing Laurel Krabacher, wearing a glassy-eyed smile)—Reverend Jim Jones is born.

On the night I saw this show, the always-engrossing Mike Brunlieb was replaced in his role as Mr. In-Between (a character that seems to be the devil) by Katie Rich, who nailed the ersatz amiability of the role perfectly (Brunlieb returns for the remainder of the run). Most importantly, Rich’s presence reminded audiences how serious The Annoyance takes its comedy, bringing in someone who only last year was on the mainstage at Second City and now writes for Saturday Night Live for one performance.

Creator and director Irene Marquette could tighten some of the filler scenes between choir members playing various members of the religious movements, but otherwise she’s got a cast that knows how to walk that blurry line between based-on-fact historical fiction and religious experience and she gets the best out of them. (Zach Freeman)