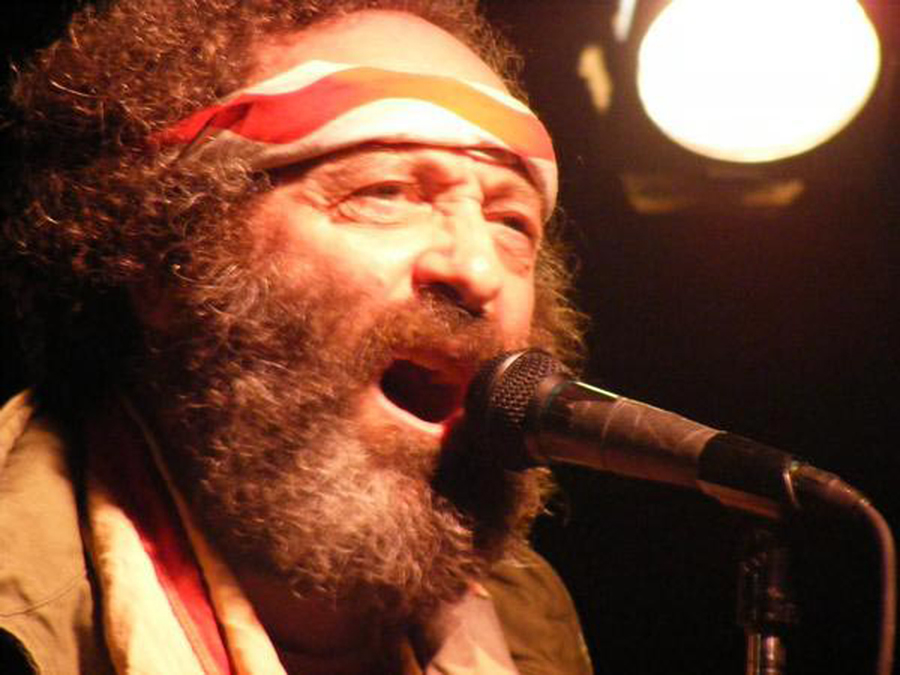 Nope, Mary-Arrchie artistic director Richard Cotovsky doesn’t spend three days non-stop in character as the late political prankster for whom his long-running theater festival is named. “I do the Abbie Hoffman for the opening and closing. That’s really it.”

Following a 2pm Friday gathering at Daley Plaza (“It’s just a lot of yelling and screaming,” says the founder) festival participants—and anyone else who’d care to join—march down to Mary-Arrchie for the opening. Two and a half days later, the closing ceremonies commence. In between, a seemingly countless number of performers present “anything they want. The only criteria is that it’s an hour or less.”

Now in its twenty-sixth year, “The Abbie Hoffman Died For Our Sins Theatre Festival” was initiated to commemorate the anniversary of Woodstock, yet was named after Hoffman—whose most enduring contribution to Woodstock was getting booted off stage by Pete Townshend. In keeping with the festival’s jam-packed nature, I asked a slew of participants the following questions:

A) bbie was known as a radical. What is most radical about your piece?

W) oodstock’s known as Three Days of Peace, Music, and—depending on which movie poster you read—Love. Which of these three concepts does your piece most address?

Jeremy Garrett, City Lit Theater, whose show is based on public domain comic books from 1930s-fifties: A) “Attempting to take art from a purely visual medium and bring it to life on stage.” W) “The love we all feel toward comic stories, books and art.” 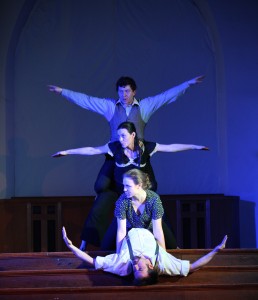 Ellyzabeth Adler, Chicago Danztheatre Ensemble, “The Wasteland,” adapted from T.S. Eliot: A) “Rudolf von Laban defined Tanztheater as joining together all art media in order to create a radical change in humankind. The type of work we do is all social justice oriented.” W) “Definitely peace. Elliot ends the poem saying Shantih Shantih Shantih, which is basically ‘may peace pass through you and onto you.’”

Jeff Helgeson, Collage Productions, “Fall From Grace”—about “an erudite, multi-lingual, intellectual, aging Bauhaus architect”: A) “It challenges contemporary thinking with respect to a general call for ‘revolution’ in terms of a broad-based ‘liberal’ education.” W) “There is original music; hope for a kind of peace that comes from understanding; and love for the idea of embracing successive generations.”

Frank Carr, Famous In the Future, who boast “perfect attendance” having performed in every Abbie Fest and will perform their “latest new batch of original comedy sketches and songs”: A) “We try to perform sketch comedy with a point… But we’re not above a good poop joke.” W) Probably music. Songs really add a new dynamic to a show and a catchy tune is a great way to end.”

Joseph Fedorko, Democracy Burlesque, presenting a “Best-Of” from the past year: A) “We are the only… sketch comedy company in Chicago that does ONLY political satire.” W) “Like a good grant proposal, we cover all three ideals!”

Scott OKen, The Factory Theater, “30 Days in the Rabbit Hole”—a “contemporary take on where our favorite fairytale heroines are today”: A) “The Factory does theater for those that don’t normally go to theater. We are not going (or trying) to change the world.” W) “Directly The Factory’s piece does not deal with any of those concepts.  It’s just a wacky excursion from the minds of two of our sillier writers.”

William Gregory, “Whatever Happened”—in which “two ladies on opposite sides of the spectrum when it comes to politics, definitions of spirituality, immigration issues, etc…  sit around and shoot the shit during the day“: A) “I think that what defines us as a citizen, a believer, or simply a human is radical. The varying definitions that people have of what these things mean to each one of us becomes revolutionary in itself.” W) “The notion of love is appealing to me; love of a country, culture, belief, or even another family member. What we will do for love can take us to extreme places.”

Eileen Tull, “Me, My Selfie, and I”—five short performance art pieces which “explore our addiction to technology and our addiction to substances and our addiction to ourselves and our own image”: A)  “I try to subvert people’s expectations of what a piece is about. Some of these pieces sorta take left turns, like a good joke.” W) “I don’t wanna say it’s a rejection of peace and love, but it stirs them in a pot and adds conflict and complication. None of the pieces are peaceful, but I hope they will help people contemplate a world where peace and love are more present.”

Jason Weinberg, Dramageddon, “Three Skeleton Key” (George G. Toudouze adaptation via Vincent Price); also, with Night Magic Designs, “The Gods Must Be Wasted!”: A) “Night Magic Designs takes… a bunch of people who are not actors, not necessarily singers and dancers, and puts them in front of a crowd who have probably never seen anything like it.” W) “In ‘Night Magic’ everyone gets to use music to say who they are. The other I’d say is more about peace, about hanging in there with your fellow man and trying to survive night and get to the next dawn.”

Pete Guither , The Living Canvas—performance theater utilizing projections on the naked body, who “pay homage to Abbie Hoffman with this piece which deals with issues of Vietnam, patriotism, capitalism, those kind of things“: A) We are juxtaposing patriotism and anti-war sentiment. W) Peace.

Jacqueline Sylvie, performing set of original music with her band: A) “I would sacrifice a lot just to play my original tunes, and not do that cover tune thing anymore. In comparison to Abbie Hoffman, I  guess I’m saying what I want to say. I can’t help but do anything other than that.” W) “Of course it would have to be music. I’ve been divorced… so I can’t say love!”

Richard Paro, Mudgeonsoul Productions, “The Fox in the Snow”—wherein “A women’s bible study meeting takes an unexpected turn when everybody’s true motives for being there are revealed. It’s a comedy.”: A) “We try to figure things out as we go. Also, the festival… all these theater groups coming together…is a very radical idea, as far as you have so many viewpoints in there.” W) “Definitely love.  I would call it a romantic comedy.”

John Fisher and Brandon Moorhead, THEINTERNETDOTCOM! “REAL”—a short play about a vengeful sex doll, and “YOUTUBEZ”—actors recreating the strangest YouTube videos: A) “We have a sex doll come to life and torture its owner, which some might consider fairly radical.” W) “Our pieces are mainly a celebration of the strange, so I guess they deal with love of the weird and horrific parts of humanity. We think Abbie Hoffman would be into that.”

Caitlin Boho, “Maureen SanDiego’s Never Going to be Famous”—her character is “inspired by drag… that sorta amped up idea of a female persona. Maureen does a parody of Brown Eyed Girl where she’s speaking very genuinely and frankly about her first experiences with reverse coitus. It’s kind of tongue in cheek. A little bit raunchy”: A) “It tends to confuse people. A lot of times, people won’t know whether I’m a man or female. And I like the idea of art being something you fail at… like, daring to suck. Maureen’s a washed-up Las Vegas lounge performer; in her mind she thinks she’s this star.” W) “Maureen is pretty indulgent and she probably has a love affair with any audience, whether it’s two people or two hundred. Maureen is in love with an audience, always.” Boho was the first interviewee to choose love. “I think they’re just saying that they’re doing a piece. Everybody picked peace? Really? They’re trying to be PC; whatever. Just put: “I love myself!!!!”

A tally of the above shows that, in the end, love wins. Which would be pretty radical.

The 26th Annual Abbie Hoffman Died For Our Sins Theatre Festival runs at Mary-Arrchie Theatre at Angel Island, 735 West Sheridan Road on August 15, 16 and 17. $10 for one day, $25 for the entire weekend. maryarrchie.com.