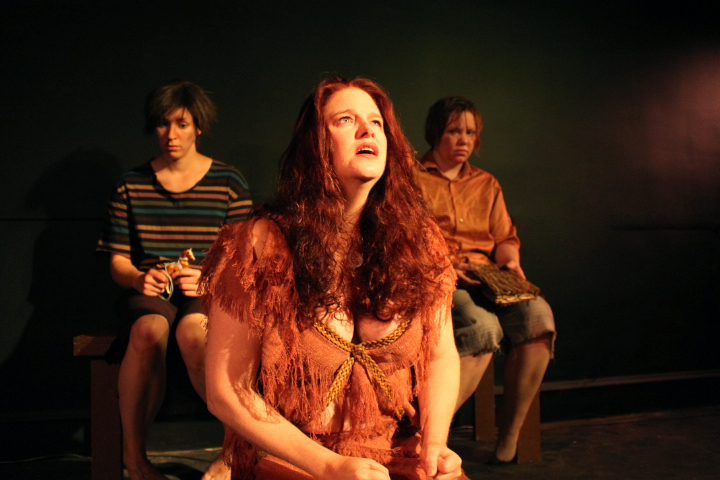 The character of Medea haunted Greek culture like a nightmare, embodying patriarchal anxiety and guilt. It’s a fitting subject for Dream Theatre Company’s resident playwright Jeremy Menekseoglu, who has taken Euripides’ familiar tale of the horrific vengeance of a woman wronged and transformed it, for better or worse, into a graphic horror story suited for an age not of gods, heroes and Fate, but rather of family dysfunction and random violence.

Rachel Martindale is a seriously crazy Medea, enraged at her husband Jason of Golden Fleece fame. Jason–played by the same Jeremy Menekseoglu, who also directed and designed the production–has dumped her for the young and pretty Glauce, princess of Corinth (Amanda Lynn Meyer). With a royal marriage in the offing, the graspingly opportunistic Jason has use neither for his aging wife–whose sorcery skills saved his fleece many times during his Argonaut days–nor their two neglected young sons, Mermeros and Pheres, played convincingly by Anna Menekseoglu and Madelaine Schmitt, respectively. The parentally challenged Jason cannot even remember their names, referring to them simply as “your sons.” Medea also is not the epitome of unconditional love, waterboarding her children as a disciplinary measure. What most distinguishes this version from the Euripidean original is that the kids are not props and plot devices, but rather the moral center of the play–the tragedy is theirs, not their absent and abusive parents’.

On its own hyper-subjective terms, the play works well. Dream Theatre seems to be basically a one-man show, built around Jeremy Menekseoglu’s interesting artistic and personal vision, and every moment has a quirky intensity and a what-will-they-do-next suspense. The haunted-house set, lurid-toned lighting and kitschy but catchy background music, juxtaposed against the classic text, together create a campily sinister mood, somewhere between Caligari and Rocky Horror.

And the acting is like nothing else you’ll see on a local stage. In an age of flattened affect and minimal selfhood, here we have an almost Victorian display of posing and mugging, verging on parody yet controlled and effective. Jason’s entrance is a masterpiece of nonverbal revelation, with his toy-soldier stiffness and pomposity betrayed by a twitchy, distracted air that testifies to his deep-seated fear of his abandoned wife and her witchy ways. Martindale’s Medea is a force of nature, cowing all those around her, including even Hera, queen of the gods (played by Kaitlin Stewart), who saves her at the end from Jason’s desperate attack.

Here the adaptation falters. Euripides, like all the Greek tragedians, was obsessed with the workings of justice in a society on the cusp between archaic religious morality and the emerging, reason-driven humanism. Tragedy was an attempt to revisit the primitive myths in light of newer values, such as–in Medea’s case–the basic injustice and dire consequences of flouting marriage vows and treating women and children as disposable property. Euripides’ Medea continues to fascinate us exactly because she’s not a monster, but a mother in desperate straits who knows that in her world there’s no future for an abandoned wife or rejected child. Her motivation is anger and vengeance, mixed with an element of twisted compassion. In this updated version, all is reduced to petty jealousy and resentment, with Jason and Medea recast as bickering narcissists who richly deserve each other, but are not worthy of their children. Medea’s supernatural rescue is puzzling, considering that the idea of her becoming a priestess of Hera was broached by the princess Glauce, whom she has just murdered.

Preserving all of the original’s considerable cruelty and gore, but less of its sublimity and scope, this “Medea” still packs a punch. As I write this, youngsters in Gaza, Iraq, Syria, Ukraine and elsewhere are dying in wars they had nothing to do with. Sadly, the theme of children sacrificed on the altar of adult insanity remains as relevant and necessary as ever. (Hugh Iglarsh)