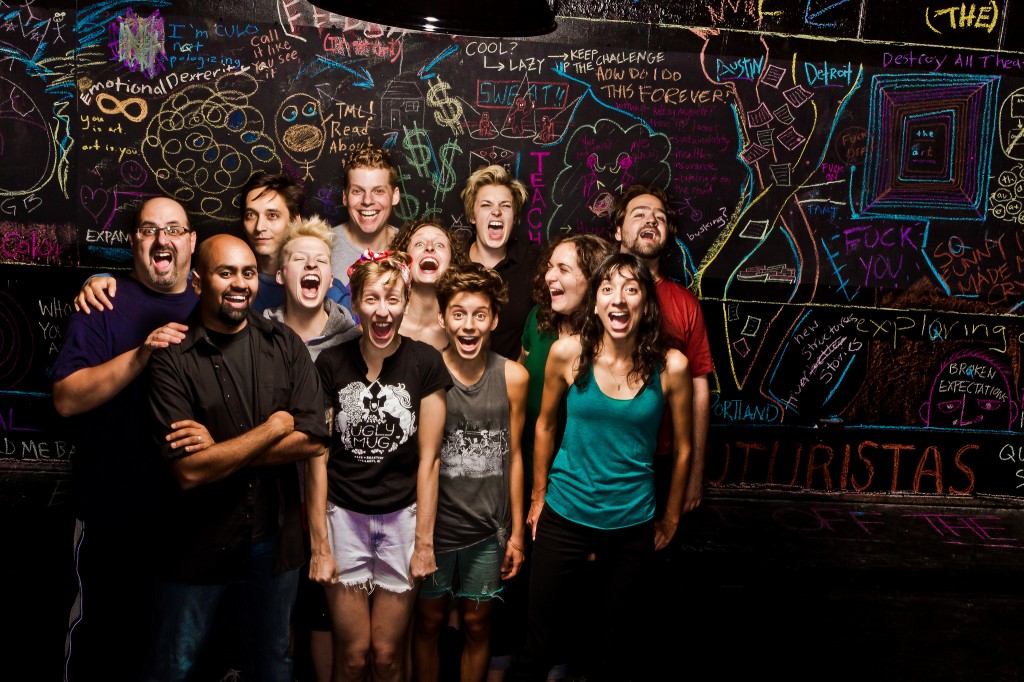 Friday night with thirty minutes to go before the doors to the Neo-Futurarium open, a line already snakes down Ashland and around the corner onto Foster. With patrons ranging from traditional theater-types to bros to hipsters and various types in between, it’s readily apparent that “Too Much Light Makes the Baby Go Blind” (TML from here on)—the longest-running production in Chicago, which recently celebrated a twenty-fifth anniversary—is still drawing in crowds and then shaking them up in the Neo-Futurists’ signature style.

Many know what to expect from the sometimes hectic, rapid-fire “30 Plays in 60 Minutes” structure of TML because they’ve seen it before and many more have only heard secondhand what they’re in for when attending this unique production. After entering the theater, audience members are promptly given a “menu” which lists the name of thirty individual plays, each with a unique number before it. In order to move the show along, audience members are asked to yell the number of the show they’d like to see next in the moments immediately following the end of the previous play. This results in an excited barrage of numbers being shouted from all corners of the audience in between each vignette and serves to not only jolt the audience but to amp up the action on stage as well.

With titles like “The One Time I Didn’t Hate Kids.” and “I don’t need any help.” these brief plays range from sight gags to physical comedy to one-liners to occasional forays into the deeper aspects of the human condition. Each delivers in its own way—though the quirky comedic bits tend to work best, especially when coupled with a more oblique reference to emotional implications.

Both the menu list and the cast change from week to week, resulting in a world-premiere every time the show is run. This gives the proceedings an air of improvisation even when it’s scripted. The actors expressly don’t play characters and though their personas might change from scene to scene they’re always fully themselves, allowing the audience to connect with them over the course of the one-hour running time.

In August and September, the Neo-Futurists are collaborating with Salonathon (a weekly performance night at Beauty Bar) to feature a series of underground artists’ projects in the hour before TML called “Infiltration.” The first artist—Kiam Marcelo Junio—opened the series the Friday night I attended and gave an especially provocative performance involving lots of earth, water, glue and glitter. The nearly nude Junio criss-crossed a tarp laid out in the center of the performance space, tossing dirt about and looking at audience members with varying levels of intensity while a voice-over track played thoughts around traditional society and change vs. permanence. If Junio’s performance is any indication, “Infiltration” will be well worth the pre-show wait.

And if the audience comments I overheard—ranging from sheer admiration to confused anger to questioning wonder—were any indication, this is exactly the kind of exposure that underground artists affiliated with Salonathon are seeking. (Zach Freeman)