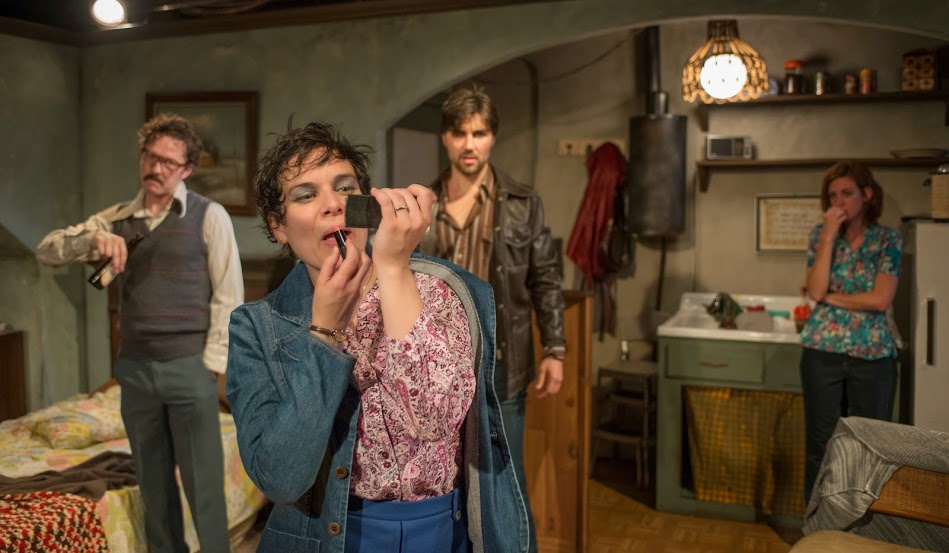 The inaugural production of Cole Theatre, Mike Leigh’s “Ecstasy,” begins with a naked Jean (Maura Kidwell) and Roy (Joel Reitsma), in her run-down London flat. Whatever they’ve just done, from the superficial small talk and the swiftness of Roy’s exit, it doesn’t take much to see love wasn’t in it.

And we see why when Roy comes ready for another session, but this time his wife Val (Lauren Pizzi) shows up. While Jean cowardly disappears, her best friend Dawn (Michaela Petro) is left alone to fight for herself against Roy’s violent attack on her and his wife.

Thankfully, a horrific situation is avoided and the only indication of a scuffle is the broken bed—which they solicit Dawn’s husband Mick (Boyd Harris) and Len (Layne Manzer), an old friend they recently reconnected with, to fix. With these old friends in the same room, the craziness turns into a drunken night of fun and memories. All seems well until Mick and Dawn leave and we see just how much pain resides in that London flat. And A Red Orchid Theatre provides the perfect space for Grant Sabin’s set, allowing for a true fly on the wall sensation.

Although the play itself has problems—we spend most of it waiting for something to happen because there is no conflict—the actors and director Shade Murray should be commended for adding depth to a sorely thin script.

The actors’ grasp of the accents are so well done that, because they speak with such fluency and quickness, it takes time for an American ear to adjust. Manzer plays Len’s awkward humor well, and Petro has a moment of physical comedy that is absolutely hilarious and painful.

However the most poignant moment comes in the final minutes of the play when only Jean and Len are left on stage. We finally see the message of the play: the face we often show the world can mask the pain and emptiness we feel deep inside. It’s a heartbreakingly wonderful message, which Manzer and Kidwell play beautifully.

I just wish we didn’t have to sit through the rest of the play to get there. (Loy Webb)