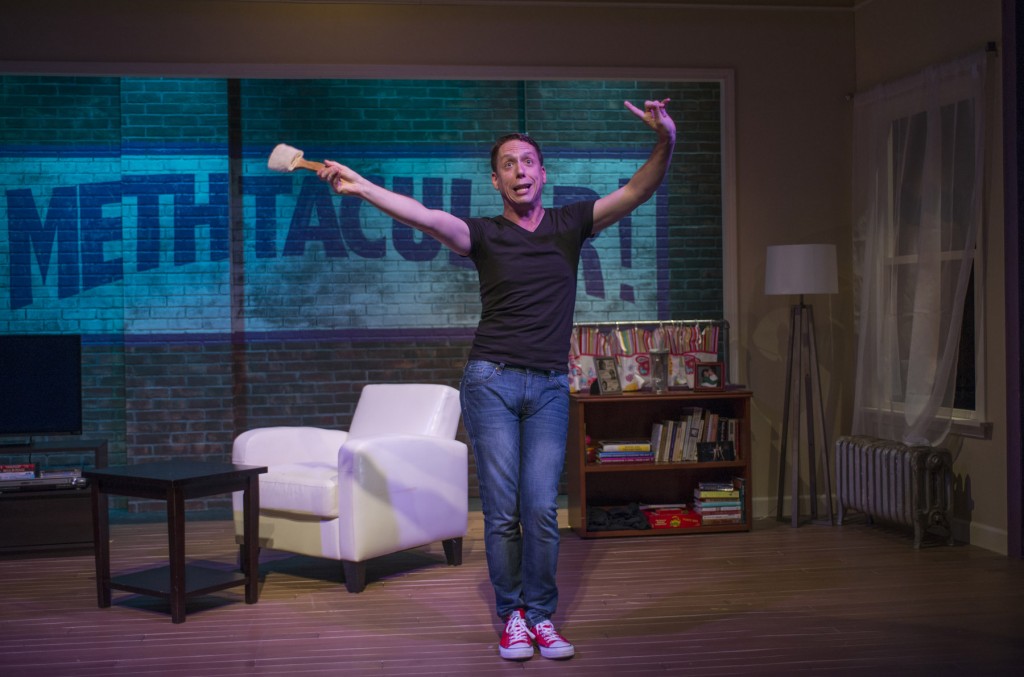 In case you were wondering, yes, you read the title of this show correctly. It’s called “Methtacular!”And I must say that the title is a very apt one, as Steven Strafford’s one-man autobiographical show is equal parts “meth” and “tacular!” Produced by About Face Theatre, the show follows Strafford’s experiences in the early oughts as a struggling actor in Chicago, or more accurately, as a flourishing crystal meth addict who struggled to fit in acting gigs around it. While it doesn’t reinvent either the one-man-show or the harrowing-personal-account-of-addiction wheel, the show hits home anyway. Simply put, it is funny and it is sad and it is an incredibly enjoyable ninety minutes spent in the company of a man who has a story to tell and the chops to tell it.

Strafford first tried crystal meth with a man he met on a gay phone-sex hotline. He advanced from there to an entire relationship with another man that revolved around meth and then to a relationship with a meth dealer at which point his entire life revolved around it. While this seems like it would be a sad, dreary slog akin to “Requiem for a Dream 2,” Strafford is not that kind of storyteller. He has a witty, engaging and often goofy presence and plays off his own flamboyant persona in framing the tale of his own misery. If anything, it’s “Requiem for a Dream 2: Electric Boogaloo.”

As he is a musical theater performer, Strafford employs original songs as well, written by the trio of Wade Elkins, Vance Gilbert and William TN Hall and accompanied by Charlotte Rivard-Hoster. The songs are infrequent enough that they don’t take over the show, remaining a single ingredient in the larger stew. And they allow Strafford to achieve a kind of emotional synergy with the story. Rather than recreate some of his lows, his relapses or his breakthroughs, they are synthesized into discreet musical moments.

My only quibble largely lies with the set design by David Arsenault. The stage is made up to resemble an apartment. It’s a pretty nice apartment. A little bare, maybe. But it does little to evoke the larger story that Strafford is trying to tell. Even though a great deal of his drugged-out years were spent huddling in apartments, the set doesn’t seem to reference that. Nor does it go so far as to conjure up the kind of happy, sober home that Strafford now keeps. It instead lies somewhere in the middle, nebulous and undefined. Considering that Strafford begins the show by evoking the star-filled musical TV specials of yesteryear, the choice of a land apartment to frame the story doesn’t make much sense.

But that concern is ultimately a minor one, because for most of the show I was not looking at the set. I was looking at Strafford. Along with director Adam Fitzgerald, Strafford has created an elegant and honest (with a dash of fabulous) accounting of his own personal struggle with addiction and self-loathing. He at one point sarcastically observes how everyone in the audience has clearly gone through the exact same experience—down to the ill-fated production of “Man of La Mancha”—so he doesn’t really need to tell us “what it’s like.” But, of course, many of us have not gone through that. And then again many of us have. No matter which group you belong to, “Methtacular!” is worth the trip down the rabbit hole. (Alex Huntsberger)