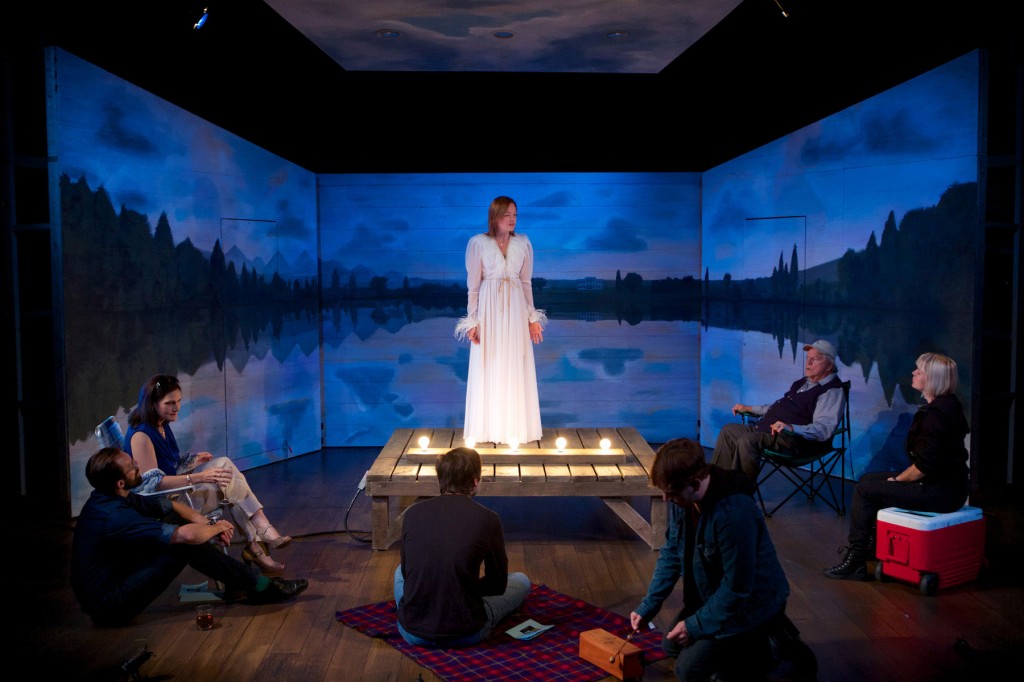 In a way Chekhov is a lot like Nirvana, in that it’s really easy to forget how great he was when you’ve been inundated with a century of increasingly pale imitations. If Chekhov’s “The Seagull” were considered his “Nevermind,” then Donald Margulies’ “Dinner With Friends” would be Creed’s “HumanClay.” Yet in “The Seagull,” Chekhov’s tragic/comic/foolish/wise/heroic/cowardly (alright, alright Chekhovian) protagonist Konstantin fantasizes about new forms of theater, ones that will shake off the dusty old retreads and lead audiences into a brave new tomorrow. So it’s only fitting that playwright Aaron Posner has chosen “The Seagull” for the funny, heartbreaking, fourth-wall battering post-punk manifesto that is his play “Stupid Fucking Bird.” And happily for both Posner and local audiences alike, Sideshow Theatre Company has given the show a breathless (as in “Breathless”) Chicago premiere.

The play itself is sometimes a little hard to describe in that it simultaneously is “The Seagull” and is not. The characters are all in place (with one notable consolidation) and the story follows the original to a tee… except when it doesn’t. However, the dialogue is all original and Posner creates a number of gorgeous original exchanges, except when he’s directly riffing on the original with smart-ass lines like “Because it’s slimming.” The best way to summarize it is that Posner uses “The Seagull” the way a child uses a Power Rangers action figure to concoct his own original story. He uses it to ask what the hell is wrong with our theater and, by extension, what the hell is wrong with us.

Sideshow’s cast on the whole is wonderful. They capture the restlessness of the play’s characters (a Chekhov staple) and are never afraid to make them look like fools. Nate Whelden as Con and Nina O’Keefe as Nina together provide a fantastic treatise on the spectrum of youthful ambition. Whelden’s is entitled and antisocial—a tantrum thrown against his mother—whereas O’Keefe’s is at first masked as youthful naiveté but soon unveils a kind of cunning that gives new meaning to the words “naked ambition.” Katy Carolina Collins locates the wounded ego alongside the wounded heart that makes the flinty, gothy Mash swerve wildly from sulking to raging. And Matt Fletcher embodies a kind of simple decency in the dopey but sneaky-smart Dev that allows him to serve as the story’s moral ballast.

Since Posner’s script so frequently calls attention to itself, and often to very hilarious effect, the pacing in the first act can sometimes feel a little odd. Under Jonathan L. Green’s direction the scenes occasionally feel like they get stuck in neutral as they bounce from realism to direct address to expressionistic outburst and back again. I sometimes felt like the funny bits were landing and the more somber ones not quiet. Luckily, act two rights all that is rickety and renders the twists and turns of Chekhov’s plot and Posner’s often gorgeous dialogue with precise, lip-quivering tenderness.

If the past century of theater has been a pale imitation of Chekhov’s writ-small majesty, then “Stupid Fucking Bird” is the perfect corrective. It goes back to the source while keeping its eye trained squarely on the future. And in the end, possibly its greatest accomplishment is this: it has the temerity to admit what so much theater can’t: it’s just a “stupid fucking play.” (Alex Huntsberger)