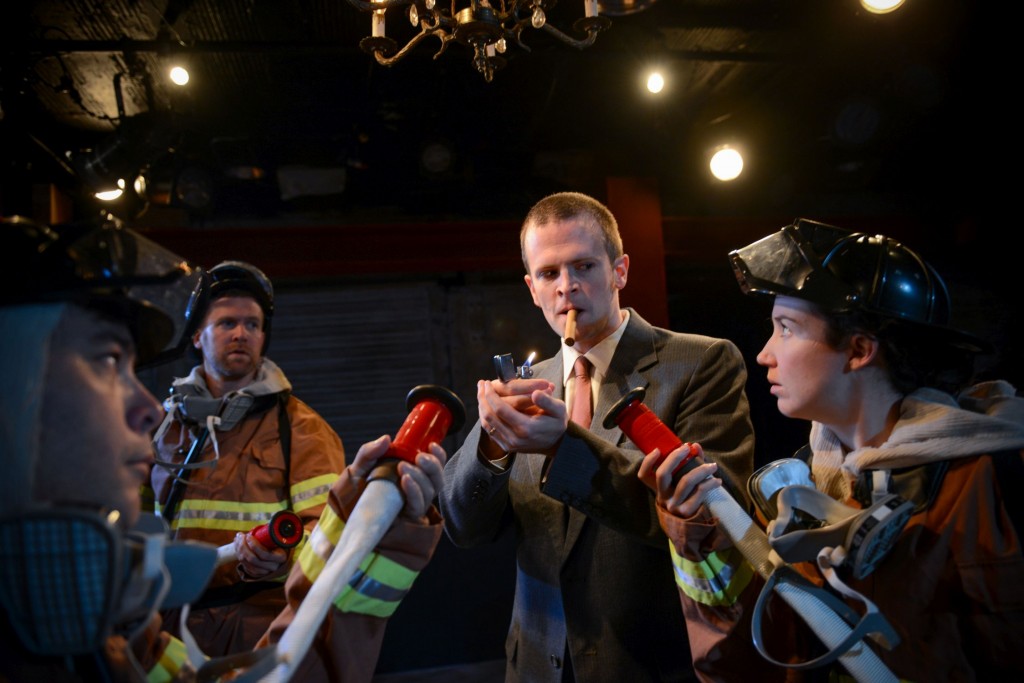 I once lived next door to an aspiring young arsonist. On either side of the house I shared with a different kind of flame, two homes were gutted with fire before the kid was caught. Fortunately, no one was killed or injured. If my neighborhood had been full of the kind of folks in “The Arsonists” I wouldn’t be so grateful for everybody’s survival. Except for put-upon maid Anna (Rebecca Wolfe, engagingly frustrated with and casually disdainful of everyone else) the characters, on opposite ends of the political and economic spectrum, are fairly equal in one regard: their laughable repugnance. Anna seems apolitical and, given her position in the employ of the wealthy and unambiguously greedy Biedermann (Robert Kauzlaric, hilariously arrogant and cowardly), we can guess her financial state is above that of the unemployed wrestler and waiter for whom this play is named. She’s in the middle of all the madness, bearing no explicit complicity in the impending disaster while surrounded by the grotesquely guilty—the only one seemingly sane or worth saving. She’s like an argument for the placating nature of a steady job.

If you’re familiar with Max Frisch’s German play from the 1950s you may know it as “Firebugs,” or by some similar English appellation. “The Arsonists” is the title provided by Alistair Beaton, whose 2007 translation director Matt Hawkins has expertly, rewardingly brought to the Strawdog stage. There’s a rash of arsons plaguing the town and Biedermann, a snake oil/hair tonic hawker who has dishonestly built his lucrative business, declares repeatedly that the perpetrators deserve the harshest penalty. But when a likely suspect, Schmitz (Scott Danielson, ingratiating yet intimidating as the former wrestler), comes to Biedermann’s door, exhibiting the same M.O. widely reported in the local press, rather than send him away or alert the authorities Biedermann capitulates—inviting him in, letting him stay, even accepting Schmitz’s apparent accomplice Eisenring as a second guest.

As the drama escalates, the bourgeois Biedermann increasingly grovels to the two dubious moochers now living in his attic. The businessman acts against his own self interest out of fear—fear of what may happen if he resists, and fear of facing his own true avaricious cruelty. The presumed arsonists and the pervasive chorus of firefighters prove somehow too subtle to force the willfully oblivious Biedermann to face reality; he’s equally dismissive of the humorously haunting visits of a widow and her orphans, whose fate Biedermann sealed by mistreating the inventor of the hair oil on which his fortune rests. Biedermann’s actions rely on excuses and the others around him merely serve to bolster his illusions. His only interest in his wife Babette (Sarah Goeden, funny and frantic) is her heart condition—which he frequently implores Schmitz and Biedermann to take into consideration.

Unlike Anna, Eisenring (Ira Amyx, winningly haughty and psychotic) has been driven to radicalism from his time serving the wealthy as a head waiter. Or perhaps he and Schmitz just like to watch things burn—as the play’s most despicable character, an ineffectual academic seen briefly, belatedly determines. Much of the ample humor centers on this class divide. The heartless Biedermann feigns sympathy with the underclass solely in an effort to save his own property. Babette, with her ailing heart, is repeatedly aghast at the upbringing of Schmitz, who milks his impoverished roots for all the cheap sympathy they’re worth. Eisenring revealingly insists on full-white-linen treatment for their last supper. That Frisch’s play remarks on class, spreading blame from top to bottom so comedically, is essential to the provocative show’s success. The firefighting chorus is as self-important as Biedermann, but more ponderously so, and often stands out as the sole heavy-handed element of the script.

Though the show hails from across the pond and over half a century ago, here and now it’s tough not to see the radicalism of Eisenring and his relationship to his cohorts as tantamount to the Occupy Wall Street movement. Milieu aside, it’s clear we join Frisch’s tale long after the point when any good may come from what follows. The more things change, the more they burn the same. (Raymond Rehayem)