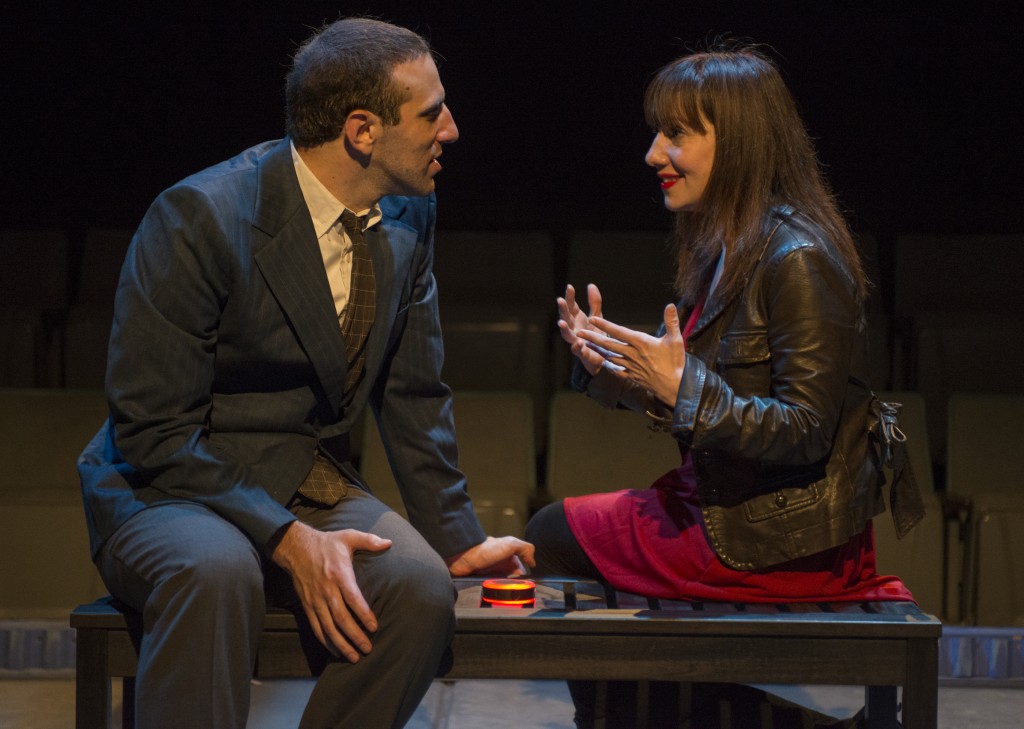 I missed “reasons to be pretty” when Profiles Theatre debuted it in Chicago back in 2011. What many consider to be playwright Neil LaBute’s best work, the show presents the fallout from a man’s offhand comment that his girlfriend’s face is “plain.” Like many of LaBute’s other shows, it examined the emotional trench warfare that constitutes the battle of the sexes in modern day, while shedding some of the more gimmicky premises of his earlier plays like “Fat Pig” and “The Shape of Things.” Unlike the show’s characters, the play embraces maturity. “reasons to be pretty” was a hit for Profiles, who now count LaBute as a company member. So it isn’t surprising that Profiles is now premiering LaBute’s 2013 sequel, “Reasons to Be Happy.”

However, having seen only this new production, I’m now sad that I didn’t get to see the original. And it’s not because I couldn’t understand what was going on; the script does a fine job of standing on its own. It’s because the Profiles production is strangely at odds with the script, and I say strangely considering LaBute’s status of a company member and their impressive track record with his work. It’s the kind of tone-deaf treatment that makes you think these people had never met.

Starring the four same characters as before, “Reasons to Be Happy” begins with a chance encounter in a Costco parking lot between the now broken-up Greg (Eric Burgher) and Steph (Domenica Cameron-Scorsese). Steph is furious that Greg is now dating Carly, her best friend—as well as his former best friend’s wife. Emotions are heightened, the mood is tense, and voices are raised, yet somehow the scene feels overblown. The dialogue is rapid fire, every new line coming right on top of the other. And I found myself thinking, “Humans don’t do this. Only actors do.” In his attempt to push the intensity to the max, director Darrell W. Cox goes too far. When Dennis Bisto enters in scene two as the super-machismo Kent, it actually plays at times like an SNL parody of masculinity.

Cox’s souped-up style of direction has worked in the past, but it needs the correct script. “Cock” from earlier this year was exactly the kind of stiletto-sharp tete-a-tete that benefitted from it. However Neil LaBute’s script isn’t quite such a never-ending boxing match. Characters get plenty of swings and take plenty of hits, but there are lulls in the action that Cox steamrolls right over. Burgher especially does what he can to bring variation, and a later scene between him and Bisto actually does demonstrate how far a slower pace and a little silence can go. But for the most part it is surprising how a show that’s aggressively in-your-face can become so overwhelmingly dull. Just because the one note is being banged intensely doesn’t stop it from being just one note.

The character who gets the worst of this is poor Steph. Admittedly, she takes some actions in the play that can’t really be described as “at all rational.” After meeting up with Greg, she decides that they should get back together, leaves her husband and promptly starts pressuring Greg to leave Carly (Sarah Loveland) too. Yet Cox and Cameron-Scorsese mostly fail to locate any kind of redeeming qualities or levels in Steph. She comes across as a screaming, wild-eyed harpy. This is problematic, as the story hinges on which woman Greg is going to choose. And given the charming practical, down-to-earth performance given by Loveland, it’s no contest. Not even close. Like a foot race between Usain Bolt and an anvil.

LaBute and Profiles are now well into the middle of what Humphrey Bogart would call “a beautiful friendship.”  Here’s hoping that their future collaborations look more like “reasons to be pretty” than they do “Reasons to Be Happy.” (Alex Huntsberger)