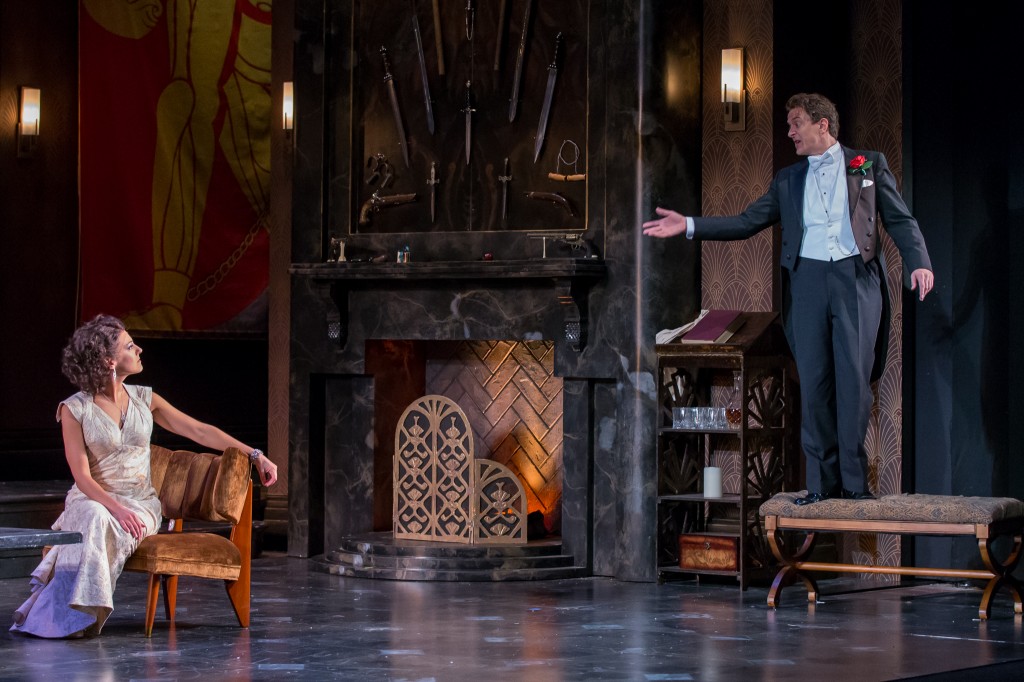 “She was ruthless. She was evil. She was a theater critic, for God’s sake!”

Delivered in the baritonal vocal stylings of Chicago’s own national treasure Alene Robertson, this pronouncement brought the press opening of Drury Lane’s production of Ken Ludwig’s “The Game’s Afoot” to a howling halt. One of America’s foremost farceurs, Ludwig continues to churn out theatrical charmers with his carefully researched comedies, chock full of good-old-fashioned slapstick and one-liners. Winner of “Best Play” at the 2012 Mystery Writers of America Edgar Allan Poe Awards, “Afoot” does not disappoint.

Given the winning whipped-cream treatment by artistic director William Osetek, this production whizzes along, immersed in the art décor era of real-life protagonist William Gillette (Derek Hasenstab) by the expert design of scenic director Kevin Depinet, Greg Hofmann’s lighting, Maggie Hofmann’s fabulous costumes, and Ray Nardelli’s sound design. If you haven’t toured the Connecticut castle built by the Broadway star of his own play, “Sherlock Holmes,” you will walk away feeling as if you’ve had a taste.

The play revolves around Ludwig’s imagining of a Christmas Eve party given by Gillette for the cast members of his Broadway production of “Holmes;” can you hear the shout of “Murder!” already? Audiences may decide for themselves if “Afoot” is a comedy within a thriller, or vice versa. The night I saw the play, the audience gasped in alarm while choking with laughter.

Hasenstab builds his Gillette with the perfect percentages of the effete and the efficient, and is a joy in both vocal and physical expression. Robertson is drop-dead hilarious as his mother, Martha Gillette. I mustn’t spoil the denouement, so all I can say about Angela Ingersoll’s hysterical portrayal of theater critic Daria Chase is that the lady is marvelously limber. Inspector Goring, who comes late to the party to investigate, was created in the Cleveland Play House’s maiden production by actor Sarah Day. Ms. Day is beloved by many Chicago theatergoers who have seen her inestimable work as a core company member at American Players Theatre. Wendy Robie makes the role her own, playing Goring as a Ruth Buzzi-type bumbler who is quicker with her comic pistol than her sleuthing. Rounding out the cast with spot-on work is Rod Thomas (Felix Geisel), Kathy Logelin (Madge Geisel), Tempe Thomas (Aggie Wheeler), and Rob Riddle (Simon Bright).

Drury Lane Theatre rarely departs from its musical theater format, but when it does, a murder mystery is often in the offing. If you enjoy Ludwig’s work in his better-known pieces such as “Lend Me A Tenor” and “Crazy For You,” “The Game’s Afoot” is just the ticket to ease you from lazy summer into bustling fall. (Aaron Hunt)