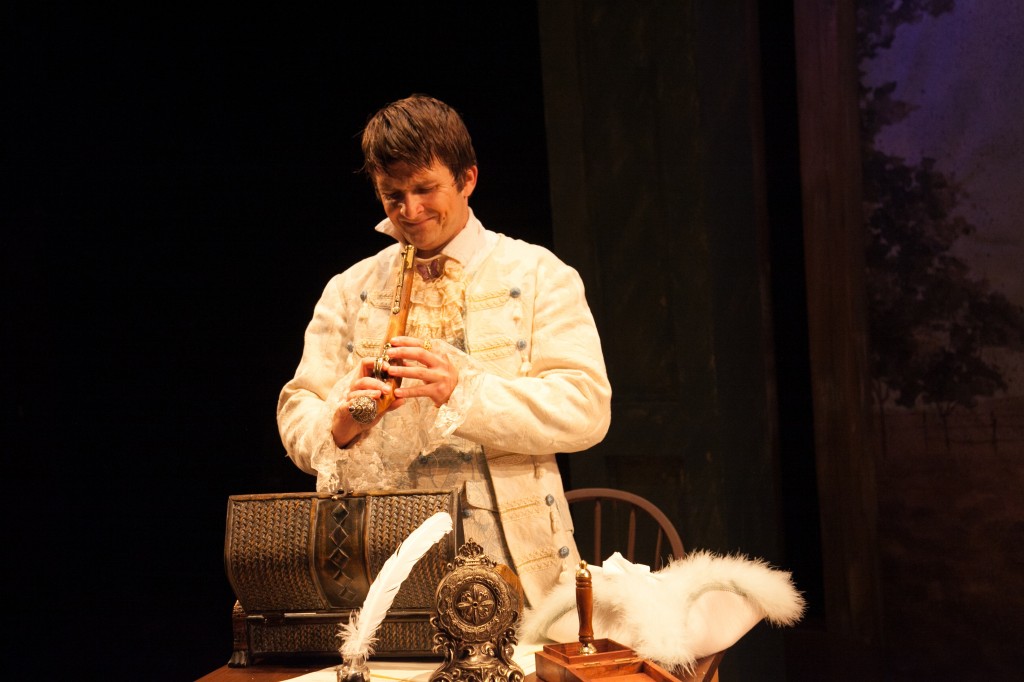 “An armed society is a polite society, ” goes the old NRA slogan. Perhaps, but it’s also an insane society, as demonstrated by Nick Jones’ play “The Coward,” receiving its Midwestern premiere courtesy of Stage Left.

The courage-challenged individual in question is young Lucidus Culling, played with appropriate fussiness by Brian Plocharczyk. He’s the son of a howlingly mad British nobleman (Stephen Walker), who has already lost two sons on the field of honor and apparently won’t be happy until he has lost his third and last. Lucidus, a cross between Gainsborough’s Blue Boy and Disney’s Ferdinand the flower-sniffing pacifist bull, is torn between the pressure to prove himself a true aristocrat—i.e., a polished, casual killer—and his passion for ranking butterflies by beauty. And then there’s his infatuation for the social butterfly Isabelle Dupree, who has won his heart and handkerchief but, as the play opens, values neither.

Lucidus’ leisured, peacock existence with his equally foppish friends (Ian McLaren and Spenser Davis), given fine visual form by Aly Renee Amidei’s outrageous satin-and-lace frippery, has much to recommend it. But alas, his privileged status must be justified by picking senseless quarrels and committing rule-bound, stylized acts of violence while stone-cold sober. Eventually, a duel does materialize, and our panicked hero enlists the services of a local thug (Steve Schine, alternately unctuous and vicious) to fight for him. The resulting contest is a chaotic nightmare, which should ruin Lucidus’ reputation. Instead, the moron media turns him into a celebrity—a Regency rock star who has shown the revolutionary, aristo-beheading French that the English upper crust is still murderous and still in charge. And after that, things really spin out of control, as the surrogate duelist uses his newly issued license to kill to rid himself of every annoyance. We see how the fascist idea that violence proves worth eventually obliterates social ties, and makes killers or victims of us all. 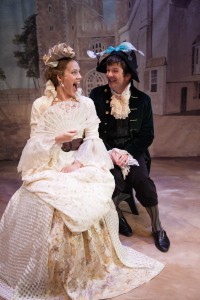 It’s an intensely relevant message, delivered with a campy, sardonic glee by director Vance Smith, who manages to keep the audience laughing amid the ever-widening slaughter. A strong non-Equity cast finds the right note of posturing zaniness, and Alex Romberg’s sound design—featuring chamber music settings of such well-chosen pop tunes as “I Can’t Get No Satisfaction”—adds to the anachronistic fun.

The real discovery here is Kate Black-Spence as Isabelle Dupree, who steals the show’s second and stronger act. A dueling groupie and full-time narcissist, who seeks to form the ultimate power couple with the now-famous Lucidus, the tooth-baring, hungry-eyed Isabelle adds sadistic sex to the gratuitous violence, thus rendering the decadence complete. Black-Spence’s performance is at once hilarious and disturbing, showing the continuity between these preening dandies and our own dysfunctional celebs.

“The Coward” has its weak spots and slow moments in the first act, and there are moments of cruelty that sour the farce and make one wish for a sane and sympathetic character among the gallery of caricatures. (The sole partial exception is the servant Friedmont, played with dry detachment by Robert McLean.) But once Isabelle makes her appearance, this blood-smeared crumpet of a play finds its groove, moving remorselessly toward its climax of all-against-all strife. It is hard to respond with anything besides nervous laughter to this portrait of a crazed culture where honor is vanity and cowardice is wisdom, set in a world that looks like yesterday but feels like today. (Hugh Iglarsh)