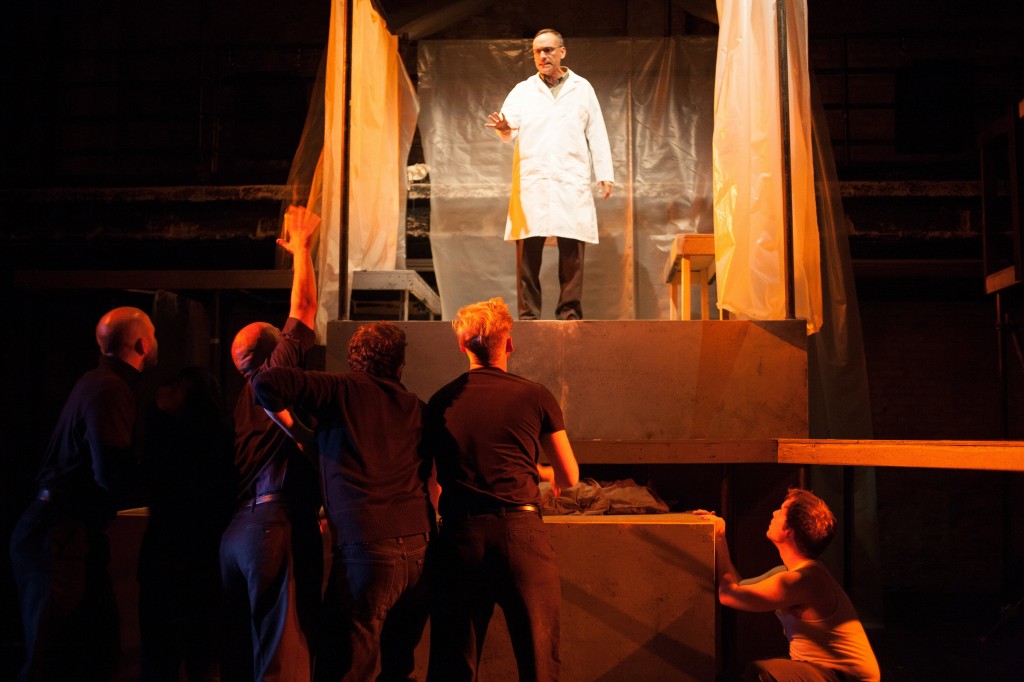 They say the clothes make the man, and so I think can a space make the theater company. For years, Red Tape Theatre was safely ensconced in a cavernous and decrepit old gymnasium attached to St. Peter’s Episcopal Church in Lakeview. The place oozed a sort of American gothic charm that more than made up for its relative shortcomings. And the sheer size of it compared to the glorified closets that many other storefront companies have to work with allowed Red Tape the freedom to pursue expansive works that others simply could not. I think back to their 2012 production of Caryl Churchill’s “Skriker,” with its ever-shifting labyrinth and remember being wowed that a storefront theater could so successfully realize a piece of such expansive ambition.

Sadly those days are now past. Red Tape’s tenancy at St Peter’s has come to an end and they are now itinerant. I had hopes when going to see their production of “Mnemonic by Complicite” at the DCA that perhaps the chance to create a new space might prove freeing, that it would unlock new creative avenues heretofore unexplored. But it was not to be. I’m not entirely chalking things up to the new digs, but what I saw was not a company that looked free. It was one that looked lost. The play, written by playwright Simon McBurney and originally devised by the British company Complicite (of which McBurney is the artistic director), has been re-devised and re-staged by Red Tape artistic director Brandon Ray and the cast. Complicite is a company known for its grounding in physicality and its heavy use of all design elements: lights, sound, video etc. To put on a play like “Mnemonic” is very different from putting on a Tennessee Williams joint. Here, the play is not the thing. It is simply one among many.

And that’s I think where this production runs aground. Ray and his actors actually do a fine job of capturing the play’s more grounded, traditionally realistic moments. But Ray fails to marshal the additional elements at his disposal. The thing feels empty, half-formed. Lots of dead air in between short, fragmented scenes, dull lighting, a set that aims for stark but lands at drab, and choreography that comes across as superfluous, like they had all these actors just sitting around and needed to give them something to do.

The script alone is simply not enough. Following a lengthy introduction/lecture/rumination on the imperfect nature of memory, the play introduces us to the adrift and I-must-imagine ironically named Virgil (Chris Carr). What set him adrift in the first place was the abrupt disappearance of his girlfriend, Alice (Meghan Reardon). When Alice reappears, albeit only over the phone, she begins to recount how she has spent the past several months travelling around Europe searching for her long-lost father. This is juxtaposed with a story Virgil remembers reading Alice about the excavation of a 5,000-year-old frozen corpse along the Austrian-Italian border. Dubbed “Iceman,” the corpse is soon beset by a team of scientists (led by Robert L. Oakes) who try to glean all they can about him and the society that begat him. Both the scientists and Alice have at their disposal mere scraps of evidence: a piece of leather and bits of hair for the scientists, an old shoe and a lighter for her. From these clues they attempt to paint a picture of their own past, their own history. To understand where they come from and perhaps then glean where they are heading.

If there’s one thing that I hope that description gets across, it’s that the plot isn’t exactly a rip-roaring adventure yarn. In fact there is barely any plot at all, just a series of concurrent events. The play is as much a meditation on its themes as it is a story about them. Left on its own it is not enough to sustain an entire two hours sans intermission. It requires the other, more visceral elements to ram its heady points home into the audience’s heart. And in the few moments that everything comes together it can be quite beautiful. One sequence comes to mind as the scientists describe the tattoos on iceman’s lower back, whilst a video projection (by Liviu Pasare) seamlessly etches these images on to Virgil’s naked skin. It is the lack of more of these moments that is the show’s ultimate failing.

One of the advantages afforded Red Tape in their old space was the option to go big or go home. They have always been a daring company, committing to playwrights like Young Jean Lee who don’t so much ruffle feathers as they do pluck the whole dang bird. And as much as “Mnemonic” is an outright failure, their attempt to tackle it in the first place still speaks to that intention. Loosed as they are now upon the storefront scene, I hope their methods can adapt to meet their ambitions. (Alex Huntsberger)