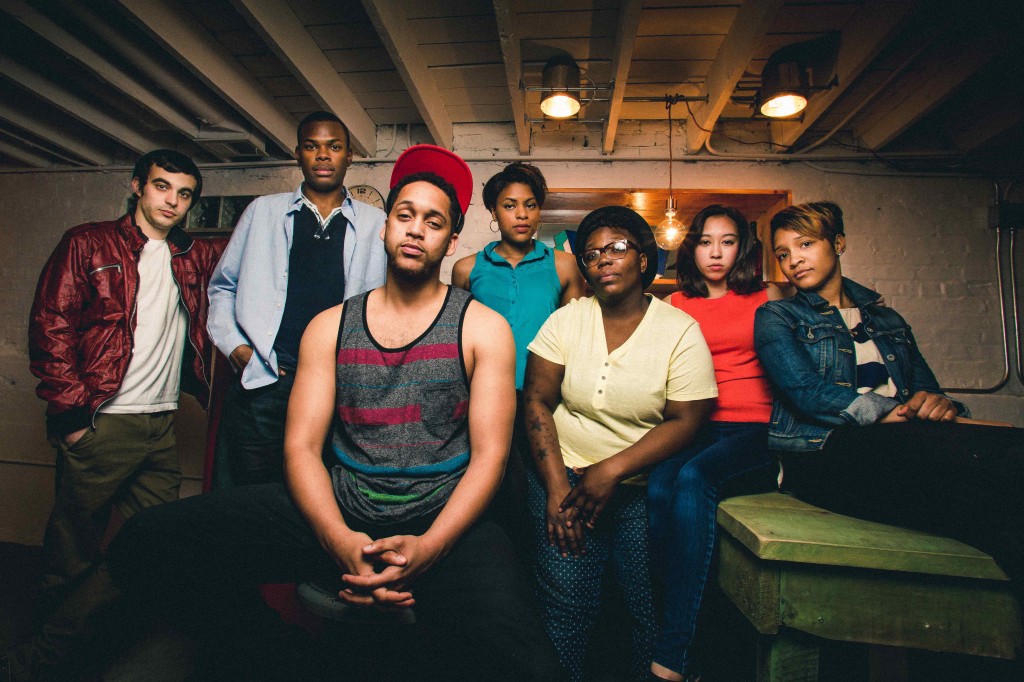 There is a contagious energy that fills the room upon meeting Definition Theatre Company (DTC). One look at their bright hopeful eyes, erect self-confident posture, and fiery passion for theater, and their ebullient spirits latch on to you. Gnawing at your inner soul, inspiring you to dream bigger and aim higher.

Most chalk this up to naive youthful enthusiasm, cautioning them to be more realistic in their endeavors and mindful of the traditional trajectory others before them have taken. However while these young people are big dreamers, they are not naive. They just understand the power of “unfolding their own myth,” as the poet Rumi states.

“Please, please, please quote me on this,” pleads White, who is making her playwriting debut with “Genesis,” the first show of their 2014/2015 season. “I can name black and black lesbian women in theater that are being talked about or mentioned in any conversation. The same goes for black men and even Asian-American women. You have Sandra Oh and then that’s all America knows. These artists are out there, but there’s no stage for them.”

Desiring to be that stage, DTC has made their primary focus language-driven, multi-ethnic, ensemble-based works. In most theaters, these types of shows are relegated to a single slot per season; but for DTC, they’re a priority. “These pieces are our livelihood. It’s what we do. It’s the stories we think are important as artists,” says Phillips.

With consistently successful crowd-funding campaigns raising thousands of dollars and an impressive roster of advisory board members—including Tony Award-winning director Pam MacKinnon and actor Jason Dirden, who just ended a run of  “ A Raisin In the Sun” on Broadway—others seem to agree that these shows are essential to the theatrical cannon.

Steppenwolf ensemble member Alana Arenas says it was a chance meeting outside of the theater that led to her being an advisory board member. “They were outside the Steppenwolf Theatre handing out flyers to their show. I mean they were on their hustle. I was coming out; mind you I was leaving work. Not from watching a show, I was leaving work,” she laughs, remembering their first encounter.

The flyer was for DTC’s inaugural production, the “The Brothers Size” by award-winning-playwright Tarell Alvin McCraney. The fact that the play was a favorite, coupled with her friendship with McCraney, led Arenas to check it out.

Impressed that White, an African-American woman, played the role of Elegba originally meant for a man, Arenas couldn’t decline the invitation to sit on their board. “For these to be young people, fresh out of school who seemed very serious about what they wanted to do and were thinking unconventionally—not just in terms of race but gender—I thought the multicultural community in Chicago needs as many innovative thinkers on the playing field as possible,” says Arenas.

Therefore when the opportunity arose to produce “Genesis,” DTC sought out Arenas, their newly found mentor, to direct it. “We knew she had never directed before. Other theaters might think we’re crazy, but that’s part of who we are as a company. It’s part of that leaping we’re doing,” Phillips says of their decision.

“All you really need is someone to believe you and I believed in Alana,” White adds.

The idea for “Genesis” was spawned while White was understudying in Milwaukee Rep’s revival of “A Raisin in the Sun” by Lorraine Hansberry. Moved by a discussion in rehearsal and a line in the play, White wrote a story focusing on the relationship between Walter Younger Sr. (the imposing yet absent father in the original) and Lena Younger (the mother who is the glue that holds the family together in the original). The play, inspired by the classic, is a poignant demonstration of true love conquering all.

“Stay In It,” the rallying cry of DTC, is defined as persistence and determination across the board from the audience to the actor. And while this ambitious company has their work cut out for them as they continue to lay the foundation for unfolding their own myth, there’s no doubt they’ll be just fine as long as they heed their own call.