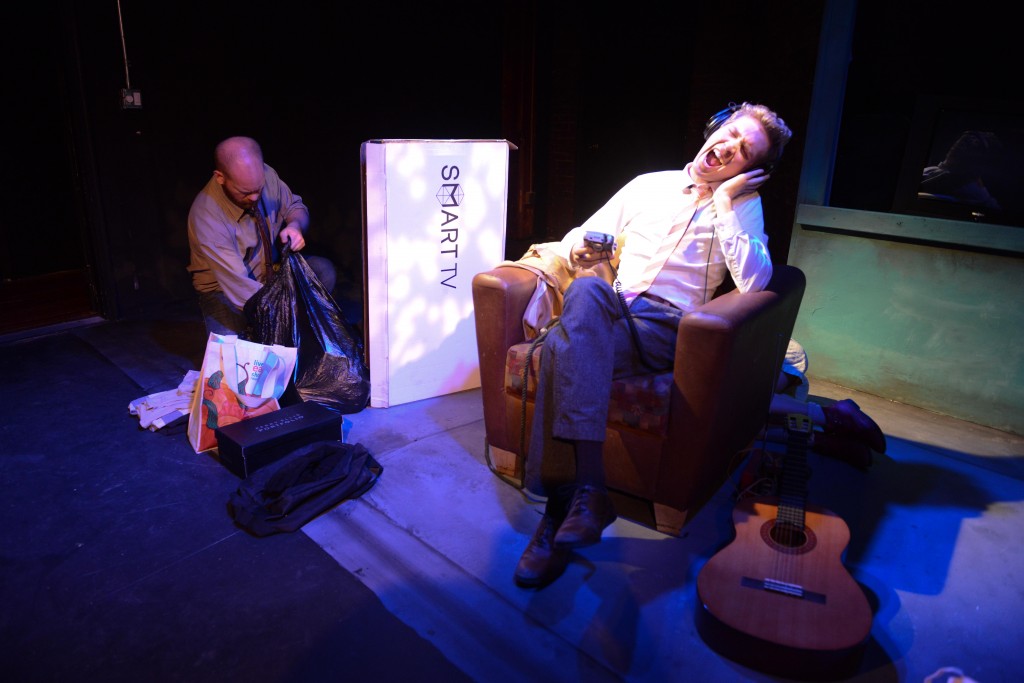 One and one and one is indeed three, but peppering a production with such notable equations doesn’t add up to much when the play being staged is less engaging than this failed math pun I’ll never complete. If you’re going to indulge constant references to other art throughout a piece, you should dare to make sure the piece in question at least has a hint of the quality of the work referenced. For a show that starts and ends with a Brian Wilson “Pet Sounds” masterpiece, the only things of near equal interest in between are other referenced existing cultural works. The discarded Madonna cassette from the personal collection of evicted and/or locked-out misery case Gideon? Gideon’s ungiftable copy of Wire’s “Pink Flag” that young Esra refuses? They’re worlds apart on my personal preference scale, but both contain more depth and intrigue than Nick Flynn’s script. The titular character is a smug, cold embodiment of something horrible and heartless—presumably our economy, or more broadly the American Way of Life—and the game she allegedly devises is anything but inventive. Mostly, it’s a framework for unoriginal monologues on life from the three other characters—Gideon, Esra, and the creepily self-mythologizing, possibly pedophiliac suit named Ivan. If Alice wins, it’s in the same way a referee who fixes a match can be seen as victorious.

Even more frequent than the pop music references, nature program videos interspersed with increasingly involved onscreen appearances of the four characters play on a TV in an electronics repair shop storefront window at center stage. Sometimes mirroring the characters’ onstage activities, sometimes diverging, the videos themselves have a homemade quality appropriate to their introduction as originating from the handheld camera used by the actors. The use of these video bits comes off as a sketch comedy show’s spoof of arty theater. Though amusing in this way, I don’t suspect that effect is intentional. Otherwise these videos serve to underscore the self-important whininess of Gideon (Tim Steinmetz), the pathological falsifying of Ivan (Chris Fowler), and the playful exuberance of Esra (Nora Lise Ulrey), while making the manipulative nature of Alice (Susan Sjodin) much clearer than in her less frequent in-person appearances.

The cast is strong. As Esra, Ulrey manages to seem both innocent and willfully ignorant of the severity of the situation around her, and Steinmetz makes the wholly unsympathetic Gideon (an adult as much in denial of his culpability as Esra is of her predicament) watchable, which is no small feat. But it would benefit the characters and the audience if whatever unspoken disaster that has blacked out their metropolis would have simply annihilated them from the get-go, or at least rendered them into some more clearly apocalyptic setting. The ambiguity of their circumstances and their relative health (aside from their hunger, mitigated but not satiated by donuts) allow the characters to remark on life as we know it, with the rhetorical advantage of not having to be anywhere or do anything, rather than engage in some unknown world after the fall. But if a play’s going to consist of discussions and monologues on life as we know it, something interesting needs to be said. I kept hoping for Flynn to put some such words in his characters’ mouths. Oh, wouldn’t that be nice. (Raymond Rehayem)