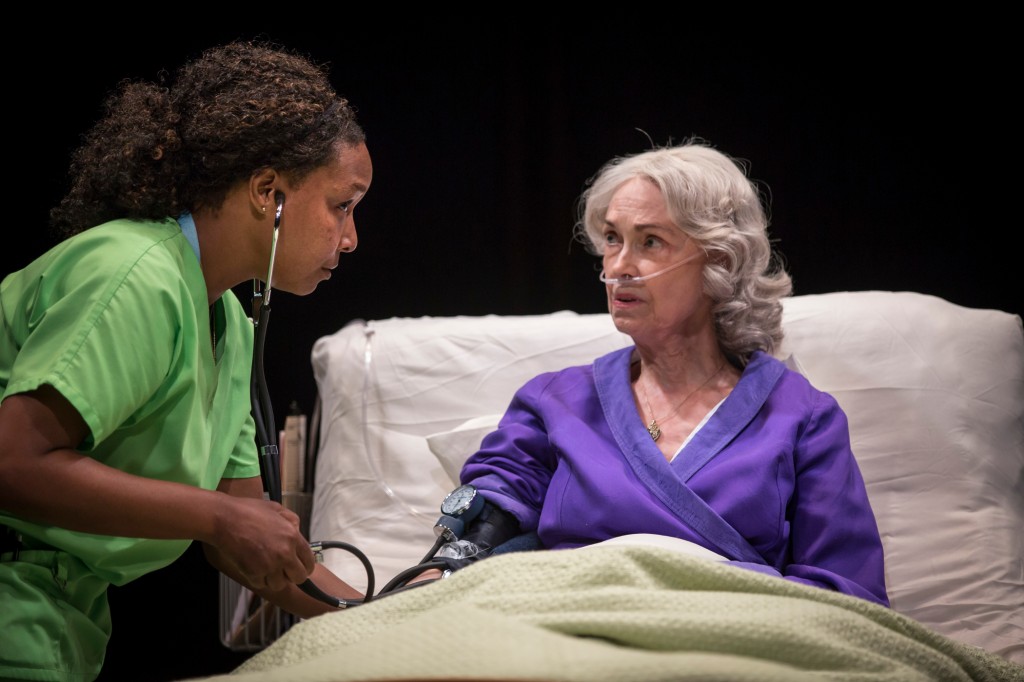 Paragraph One. Playwright Lucas Hnath’s having a Chicago moment, with his “Isaac’s Eye” in simultaneous production at Writers Theatre this fall. “Death Tax” (Can you imagine the groan emanating from the marketing department when that title was announced?) is a tight, seventy-five minute exploration of healthcare, morality and family ties getting its Lookingglass treatment behind the capable direction of Heidi Stillman. In typical Lookingglass style, the set exists mostly in the imagination: a simple black square painted on the floor with the audience seated in a square as well, on three of four sides. But the sense of being “boxed in” is palpable throughout this play that wears its structure on its sleeve, with lead J. Nicole Brooks announcing each of five scenes in place of conventional transition. Paragraph Two. The only character in every scene, Brooks delivers a fiery, riveting performance as the nurse Tina tending to a dying old woman Maxine (Deanna Dunagan striking a perfect note of manipulative vulnerability) who’s convinced that her only child, her grown daughter, is secretly paying Tina to hasten her demise, for tax purposes. She’ll outbid her daughter and pay Tina to extend her life, money that the nurse needs to try and get her child back from an estranged husband in Haiti. From here, the play unfolds as a sort of nursing-home noir, with the introduction of each successive character (in successively numbered scenes)—Tina’s milquetoast boss, Todd (Raymond Fox is so wimpy here you just can’t help but want to kick his ass), Maxine’s not-so-nefarious daughter (in what amounts to a single-scene cameo for Louise Lamson, who delivers duly with the earnest pleading)—raising the stakes and further entangling the moral morass that drives the show. Paragraph Three. Ideas swirl around the story—notions about how tax law changes can influence behavior, how family members drown, at times, in the soup of their own mutual mendacity, about the complete and utter power surrender that occurs when we’re hospitalized and rely entirely on health care professionals. Other concerns pass through as well, such as the propriety of office romances and the complete powerlessness of immigrants who need to access the legal system. Paragraph Four. The play is barely about taxes, so calm down, CPAs, unless we’re talking about “taxing” in a broad, metaphorical way as opposed to the financing apparatus of government. And while death does hang in the air throughout, the play’s really about life, and those who seek a better or longer one for themselves and their children. Paragraph Five. “Death Tax” builds beautifully into a deliciously suspenseful mess of ethical dilemmas through four scenes, only to suffer complete deflation in its complete copout of a conclusion, a sort of deus ex machina that allows the playwright to avoid “solving” the situation he’s created in favor of a leap into the future. Even worse, he turns Brooks, whose Tina is the heart of the story, into a minor character, a social worker forced to concede the finale to the far less interesting—even with Dunagan’s fine performance—character of Maxine. Perhaps this was Hnath’s way of commenting on conventions of narrative in order to make a point about the fragility of putting our faith in them (just as the characters on stage are taught the weakness of putting faith in family). Perhaps Hnath thought resolving the conundrums driving the story toward its conclusion would have been too conventional, too easy. If so, this would have been the time to take the easy way out. (Brian Hieggelke)