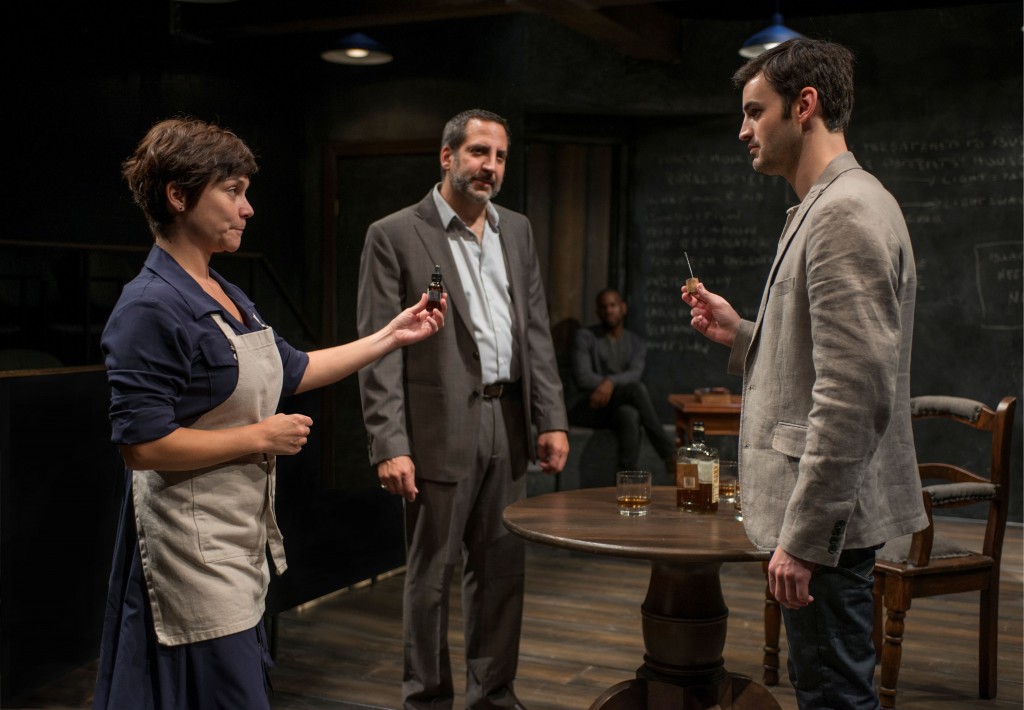 Lucas Hnath is not concerned with getting it right. He’s concerned about getting it true. From the outset of his devious new play “Isaac’s Eye” he states that this story is filled with “ether”: the unseen stuff that allows us to understand the things that are true. Hnath has taken this idea from his play’s subject, Isaac Newton, and extrapolated it to encompass the work itself. We are told that most of what we are about to see did not happen. The play even helps us to distinguish fact from fiction by having the actors write everything in the play that is factually true on a chalkboard. It’s as though Hnath is saying “we’ll leave the history to the lecture hall and get on with the business of art.” And get on with it he certainly does.

I don’t think that “Isaac’s Eye” could ask for a better Chicago-area home than it finds in Writers Theatre. Their particular blend of skill, empathy and wit is a perfect match for Hnath’s humane but intellectually ambitious script. Out of one part fact and two parts whole cloth, “Isaac’s Eye” spins a tale of a young, hungry entirely unknown Newton (Jurgen Hooper). After somewhat vaguely agreeing to marry his longtime (and long-suffering) companion Catherine (Elizabeth Ledo), Isaac promptly has her contact an old friend of her father’s, Robert Hooke (Marc Grapey), a scientist extraordinaire and member of Isaac’s ticket out of Nowheresville: The Royal Society. After reading Isaac’s papers Hooke is immediately threatened by the young man’s considerable intellect and agrees to meet him in person, the better to shut him down.

The main part of the play’s action comes down to a duel of minds—and later wills—between Newton and Hooke. Director (and Writers artistic director) Michael Halberstam shapes these exchanges with the utmost precision while never letting the audience, or his actors, forget that what is really being fought over is Newton’s soul. Although Isaac is a bit of an ass, he is also a man of strong moral convictions and religious beliefs. The only way he can defeat Hooke and follow in his footsteps to scientific acclaim is by sacrificing what is good within himself. He can choose to be like Hooke, or possibly even worse, he can choose the path of a simple, hard but possibly happy life with Catherine. Scientific ideas and theorems whizz about like electrons around an atom but Halberstam always makes sure the moral dimension stays front and center. Without that, the play is simple biography. With it, it is tragedy.

The cast is uniformly excellent, although Grapey stands out for his blunt, Chicagoan rendering of Hooke. In addition to the three principals, actor LaShawn Banks serves as the play’s narrator. He’s the one who does most of the writing on the chalkboard, which here is the entire back wall of the set (by Collette Pollard). Banks also plays the character Dying Man, a man who is (surprise, surprise) dying of the plague whom Hooke and Newton commandeer as a test subject. He is the complete antithesis of Isaac. A good man of simple means, with no ambitions beyond having someone say to him “I’m happy that you lived.” He is the play’s linchpin, its true moral compass. And of course he is also entirely fictional. He is a creation of Hnath’s, made entirely of ether so that we can see, for once, what is true. (Alex Huntsberger)