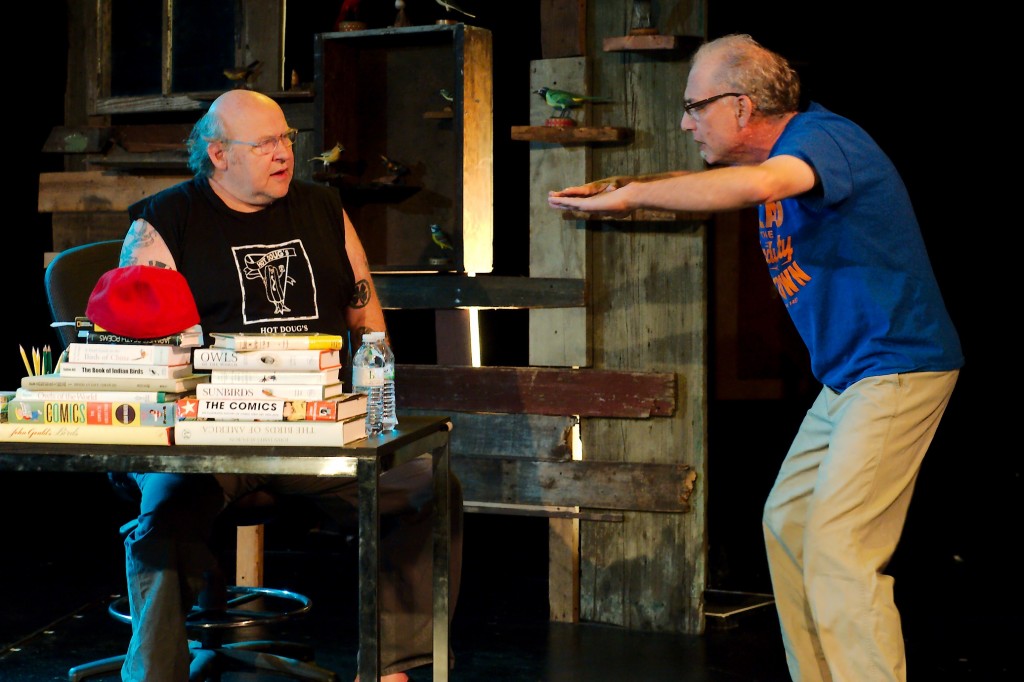 Tony Fitzpatrick is moving to New Orleans, and his friend Stan isn’t happy. That about sums up the premise of “The Midnight City,” currently playing at the Steppenwolf Garage. It is a loose, shambolic reminiscence of both a man’s life and a city’s. How things change and how they stay the same.

Fitzpatrick is a local artist and grade-A curmudgeon, a holdover from the Studs Terkel era (editor’s note: he’s also a “Newcity” contributing writer). I was not familiar with him prior to attending, and can definitely report that I’ve been missing out. The show’s structure—if it could be accused of having something so square—revolves around conversations between him and his longtime compatriot Stan Klein. The two bicker about Fitzpatrick’s impending move, rail against the hardscrabble city being lost to gentrification and reflect upon the history of their own relationship. For all of Fitzpatrick’s self-proclaimed punk-rock credentials (including his friendship with Lou Reed which, okay, is a pretty solid line on the ol’ resume) the show is very much a paean to The Good Ol’ Days. (Of course, that doesn’t necessarily mean that they’re wrong.)

Klein makes a fitting foil for Fitzpatrick as he is basically the man’s polar opposite. Fitzpatrick is a large man with a larger-than-life personality. He is charmingly, indelibly, at-all-times himself and seems like he would struggle in trying to be anyone else. Klein on the other hand is a slender soft-spoken man with a life-long habit of living through personas. The two we meet in “The Midnight City” are the amiable Wrigley field usher Leo and the wild, Byronic artist Vito Desalvo. The two men have a kind of Laurel and Hardy vibe to them, Fitzpatrick as the swaggering (but lovable) blowhard and Klein as his more cautious (but no less sardonic) companion. Their palpable and well-lived-in chemistry propels the show along its rambling path.

Though each possessed of a distinctive stage presence, neither man is a natural actor. Some of their more stilted exchanges have all the realism of a middle school Christmas Pageant. And yet not once did I actually care. The feeling is not one of “we are trying really really hard to be natural right now and we’re just not very good at it.” It’s much more of a “eh they know it ain’t real so screw it.” Their stiffness—especially Klein’s—is its own brand of charming. After all, they aren’t presenting Ibsen or anything. They’re just here to talk about some stuff.

Director Ann Filmer keeps things going at a nice clip and gets out of the way when she needs to. The show is kind of a mess, but if it were more polished it would feel somehow false: like it’s for the yuppies with the double-wide strollers that Fitzpatrick despises so much. Filmer does a wonderful job of incorporating video (designed by Kristen Reeves) mostly derived from Fitzpatrick’s own artwork and Super-8 footage of the city. The live music provided by John Rice and Anna Fermin is a little underused and I found their cover of Reed’s “Rock and Roll” a little too cleaned-up for my taste.

If Fitzpatrick is really moving to New Orleans then Chicago will be losing something special. Check out “The Midnight City” if you want to know what that is. (Alex Huntsberger)