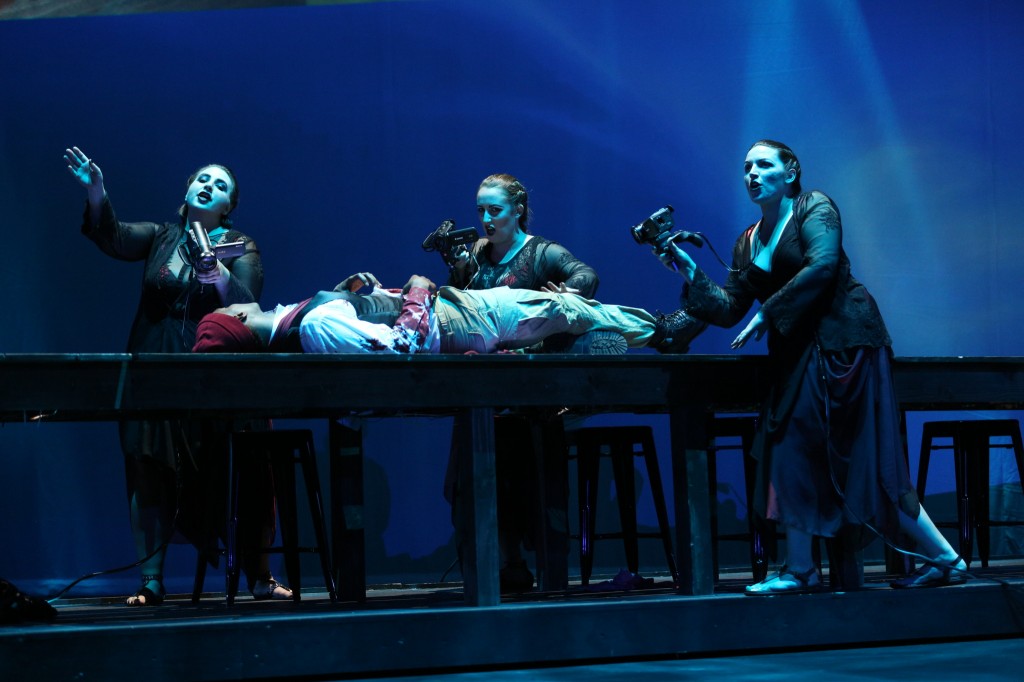 Shakespeare’s play of the same name came to be called “The Bard’s Opera” because producers would schedule the widely popular piece when revenues were low, giving the players reason to believe that their talents might shortly need to find a new place of expression, striking such fear into their hearts that it was considered bad luck to speak the name of the title character. “Bloch’s Opera” succeeds in a fearlessly visceral way by leaning heavily on the text that shored up the finances of Elizabethan theaters, superstition be as damned as Macbeth himself. Chicago Opera Theater’s production tells the ancient tale in graphic symbolism while using the sort of multimedia gadgetry that allows both a generation steeped in operatic traditions and a newer audience that must be encouraged if the art form is to continue to be riveted.

Given in a series of seven tableaux, with COT’s slightly cut production listed as having a run time of 110 minutes without intermission, Ernest Bloch’s only operatic contribution proves his zeal for the thematic intricacies and rich orchestral scoring of Wagner. Internal melody soars from the pit in reactive counterpoint to the supple vocal lines, both delivered up in instrumental surprises. Bloch’s pulsing orchestral and choral compositions might have prepared us for this singular masterpiece had it followed a lifetime’s work. But the piece was written early in Bloch’s career, premiering in 1910 when he was only thirty years of age. The fact that it is seldom performed, quietly crouching in the shadow of Verdi’s “Green’s Opera,” is a wrong that COT artistic director Andreas Mitisek, conductor Francesco Milioto and Apollo Chorus director Stephen Alltop illuminate. The combined effect of Mitisek’s sexy direction, Milioto’s musical-gumshoe’s instinct for locating and bringing to justice every ounce of romanticism, and Alltop’s unbroken track record for training his chorus to express such varieties of style and color that it rivals any other in the city on this under-appreciated work should cause us all to shake our heads.

Nmon Ford’s razor-sharp baritone cuts through the layers of orchestration with ease, never sacrificing lyricism. Suzan Hanson’s Lady Macbeth is a lesson in restraint; her playing emphasizes logic, however askew, and her descent into madness comes surprisingly, refreshingly late to the party. Sean T. Cawelti’s video design turns the piece into a hybrid, marrying opera, film and projection; perhaps this magical amalgam is the true star of the event.

If the terrific Joe Shadday wasn’t gifted so many different roles that his appearances and reappearances brooked confusion; if the wonderful trio of witches (Brittany Loewen, Helen Wyatt and Cassidy Smith) weren’t directed to overplay affinity for their own bosoms; if there seemed some reason for Macbeth to enjoy his wife at length as a cur desires; if there weren’t projections and filming that filled the stage at times when I wished I had been able to wring my attention away to observe vital plot-points occurring onstage; if the promised 110 minutes of sitting hadn’t been augmented by a late start, followed by a ten-minute speech, Mitisek reciting a heretofore undiscovered bit of Shakespearean verse expounding on the virtue of gifting to COT: then my enjoyment of this “Macbeth” would have been boundless.

Now I’m going to run outside, turn around three times, spit on the ground, and then knock on the door and see if anyone will let me back in. (Aaron Hunt)