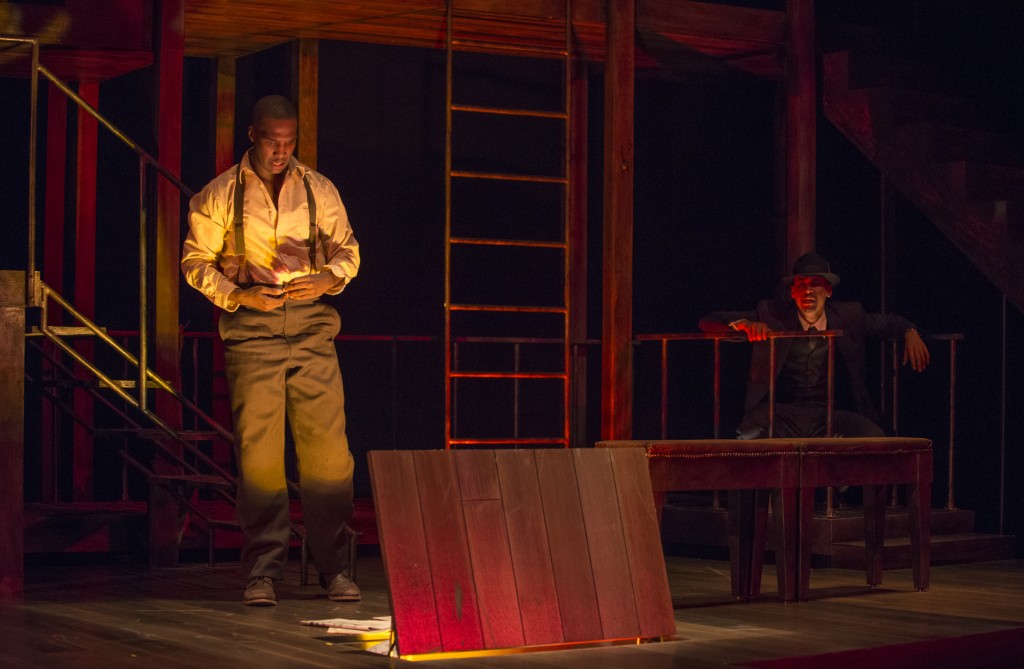 In a “Poem About My Rights” June Jordan pens these words, “Wrong is not my name/ My name is my own my own my own/and I can’t tell you who the hell set things up like this/ but I can tell you that from now on my resistance / my simple and daily and nightly self-determination / may very well cost you your life.”  Jordan’s words, though written long after Richard Wright’s novel “Native Son, ” are the unofficial biography for his protagonist’s life. For so long Wright’s protagonist has been told that he is wrong, akin to an abominable black rat not worthy of life. Yet like in Jordan’s poem, when his spiritual awakening manifests, his fear dissipates and he realizes he has the power to name himself. It’s beautiful indeed, yet the road is long and rocky.

The play “Native Son,” adapted by Nambi E. Kelley, opens up with Bigger Thomas (Jerod Haynes) and the highly inebriated daughter of his new boss Mary (Nora Fiffer).  Unable to stand, Bigger helps Mary to her room. While helping her, Mary begins to flirt with Bigger, who is initially reluctant to respond because she is white and he is black. Still, he eventually gives in to his desires, but their moment is interrupted by Mary’s blind mother Mrs. Dalton (Carmen Roman). Bigger’s attempt to quiet Mary by placing a pillow over her mouth ultimately leads to her death.

From there, the play takes us on a rapid-fire, non-linear journey to explain what has led Bigger to this point, and the witch hunt that ensues afterwards. Along the way we meet his family, living in abject poverty: his mother Hannah (Shanesia Davis), brother Buddy (Edgar Miguel Sanchez) and sister Vera (Tracey N. Bonner). We also meet his friend Gus (Tosin Morohunfola) who he regularly engages in mischief with, his boss Mr. Dalton (James Leaming), Mary’s communist boyfriend Jan (Jeff Blim) and Britten (Joe Dempsey), the private investigator hired to solve the mystery about Mary’s disappearance and ultimate murder.

Director Seret Scott does an excellent job seamlessly weaving in and out of time and space. Jerod Haynes is to be commended for his performance not only because his face has the ability to carry the pain,  frustration, anger and vulnerability of an African-American man in America struggling to figure out and reclaim his own identity, but for ninety minutes without wavering he holds up to the physical demands the role requires.

Moreover, what is most engaging about Kelley’s script is her choice to dramatize the internal consciousness of Bigger as “The Black Rat” (Eric Lynch), which is the vile way the world sees Bigger. As we see this duality play out on stage, it’s the triumphant merging of the two into one man that inspires you to look in the mirror and find out the true identity of the person staring back at you. (Loy Webb)