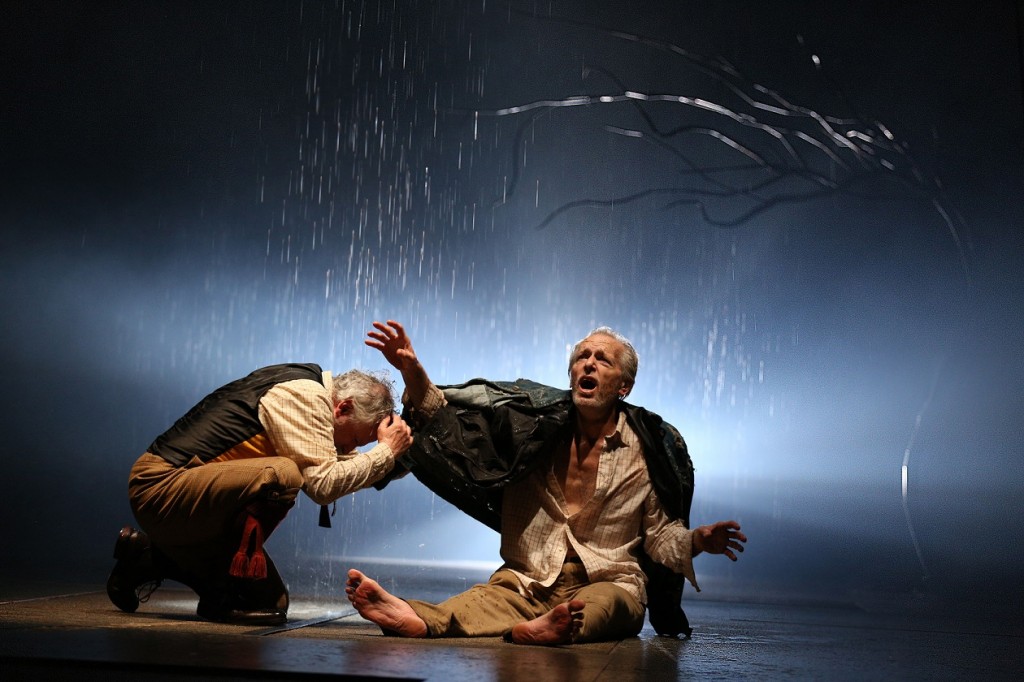 The image one usually comes away with from a production of “King Lear” is that of the aged king, stripped down to his skivvies and raging against the elements. But one comes away from Chicago Shakespeare’s new production with an entirely different image altogether: that of Chicago stalwart Larry Yando carrying the show upon his back. Yando’s Lear is a thrillingly complex creation and his performance is not unlike watching a crumbling mansion be methodically stripped down for scrap until there’s nothing left but a muddy hole in the ground. In fact, if one could likewise strip away the rest of Barbara Gaines’ production, it would probably be for the best.

The only original idea that Gaines brings to the table can be summarized in two words: Frank Sinatra. That’s right, Ol’ Blue Eyes himself, that cavalier chronicler of mid-century decadence and white male ennui, has been chosen to illuminate the themes at hand. Or maybe this production of “Lear” was all just a Trojan Horse for The Sultan of Swoon, for audiences to sit back and reconsider just how dang melancholic a lot of his tunes were. I can’t really tell you, which is part of the problem.

Gaines establishes that Lear is a fan of the Chairman of The Board in a sigh-inducingly tacky opening scene wherein Lear flips through a number of Sinatra’s songs, growing ever agitated that their melancholic lyrics do nothing to assuage his fear of obsolescence. To say that it is on the nose is an insult to things that sit on the nose, like eyeglasses or zits. (When Lear starts smashing his remote out of anger only to have his butler produce a new one without batting an eyelash, the kind of weak joke you might find in a CBS sitcom, you know exactly what you’re in for.) The songs begin to reoccur later, only they are now ghostly fragments, haunting Lear as he progressively loses his mind. However, not once did I think anything other than “Oh, look, you took that Frank Sinatra clip where lyrics correspond to Lear’s predicament and you made it all echoey.” It takes the audience out of the story and had the Sinatra songbook been removed, would likely go unnoticed.

The only problem is that once you remove those songs, the rest of the production—Yando aside, of course—is white bread bland. The initial set by Mark Bailey, who also did costumes, is a giant shiny-silver wall-slab that is then lowered to reveal… the set of a Beckett play, basically. There’s the lonely, barren tree off to one side, the looming shadows in the rear, the nothing-else-besides-those-shadows-and-that-tree. Meanwhile, Bailey’s costumes are modern dress without having anything to say about modern society. When Yando’s naked frame is revealed, pale and lean like a malnourished Wendigo, it is far more striking than any article of clothing on hand.

The other actors surrounding Yando are a mixed bag. Kevin Gudahl as the loyal Earl of Kent gives a touching performance, with the added bonus of being disguised as a Scottish biker for the majority of the show. Steve Haggard lends the noble Edgar a nice arc and brings a fine, funny edge to the ravings of Edgar’s alter-ago, Mad Tom. On the other hand, Jesse Luken plays Edgar’s evil half-brother Edmund with skin-deep smirkiness that quickly wears thin, and Nehassaiu deGannes as Lear’s daughter Cordelia fails to make virtue seem like, well, a virtue.

And yet Yando is so arresting as King Lear that the entire evening is somewhat redeemed. He makes the man a study of impotence from the very beginning, his lack of control—whether that be control over his subjects, his daughters, or his own temper—becoming more apparent with each passing indignity. And Yando truly locates the sweet, childlike wisdom that is at the core of Lear’s madness. Here is a man who had everything, but only once he has nothing is he able to find a kind of peace.