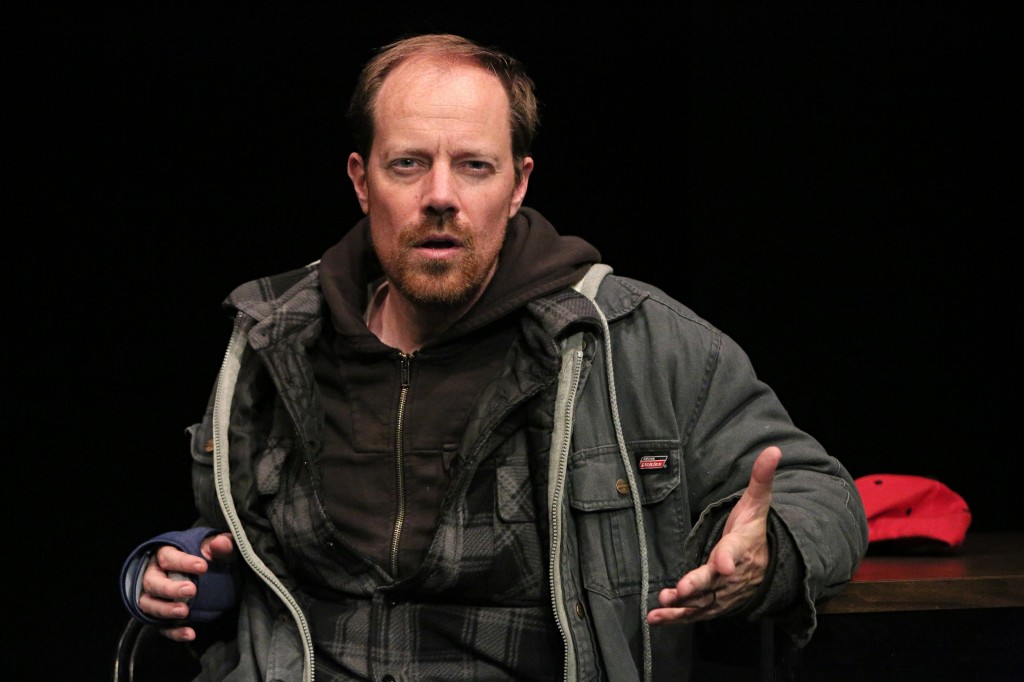 As I walked into the theater and was greeted by the set for “Mercy Strain” I had to smile to myself. The show has been advertised as a hit at the 2013 Edinburgh Fringe Festival, and as it happens I have just recently returned from a visit to the 2014 festival. While there, my friends and I joked that every show we saw had a few things in common, namely the fact that they all included very few actual things. The slots in Edinburgh are so tight that any extraneous props or set pieces have to be cut, lest the time you spend setting up lead to the lights being switched off mid-climax because you’ve run five minutes over. The perfect Fringe show, we would say, probably involves nothing more than a table, a chair and one actor just acting his butt off. Lo and behold, the set for “Mercy Strain” turns out to consist of one table and one chair. All that was needed was one actor acting his butt off and the set would be complete. Happily, by the end of the evening, actor Michael Milligan’s butt is nowhere to be found.

Following its success at the Fringe, “Mercy Strain” has toured across the country. It is being presented in Chicago by American Theater Company in rep with Anna Deavere Smith’s “Let Me Down Easy” (starring Usman Ally) as “The Healthcare Plays.” If you get a chance to see both, I highly recommend it, as each show features a single actor embodying the dilemmas inherent in our country’s “What’s Mine is Mine and I’ll Sue for What’s Yours” healthcare system, but in dramatically different ways. Actor Usman Ally embodies nineteen different characters in Deavere Smith’s emotions-impaling docudrama, while Milligan’s piece is an entirely fictional work focused on a single man who unfortunately becomes The United States Healthcare System’s own personal Job. Different as they are in scope, each play will leave you with a fresh, gaping hole where your heart used to be.

“Mercy Strain,” which Milligan also wrote, is the story of a man named Joe. Joe is an auto-shop owner but he might as well be Joe the Plumber for all that he represents. He is a hard-working bootstrapper who styles himself an independent but is an avid listener of Rush Limbaugh. Joe asks nothing from any man and expects others to do the same. When his wife contracts breast cancer and the two rack up hundreds of thousands of dollars in medical bills, Joe is horrified at the prospect that she might have to go on Medicaid. The only thing more horrifying is when she can’t.

Joe’s story is presented as quite literally that: a story. He is in a police interrogation room offering his testimony to an uncaring and unseen detective. Director Tom Oppenheim is correct in not worrying about overly theatricalizing the piece—a few subtle light changes do the trick just fine—and instead rely almost entirely on Milligan’s performance to carry the weight. Milligan imbues Joe with a mumbling defiance and a half-drunk, half-hungover lilt that not only capture the man he tells us he used to be, but also the crucible that has reduced him to the man he is.

The writing, while heartfelt and occasionally quite evocative, can sometimes be a little strained itself. That comparison to Job is not one-hundred-percent a good thing, and some of the troubles that befall Joe go a little bit beyond belief. For instance, it is not enough that Joe’s wife’s medical bills lead them to downsize to a smaller home, but the new mortgage also leads them into the jaws of the 2008 housing crisis? In trying to capture the enormity of the problems afflicting the US healthcare system, Milligan sometimes makes Joe’s story more allegorical than personal. This robs us then of that emotional investment, which is the thing that really pays off down the line.

But for whatever small faults Milligan may have as a writer, he more than makes up for them with his performance. “Mercy Strain” is a simple but powerful cry for change and ATC’s “Healthcare Plays” a fantastic forum in which to hear it. (Alex Huntsberger)