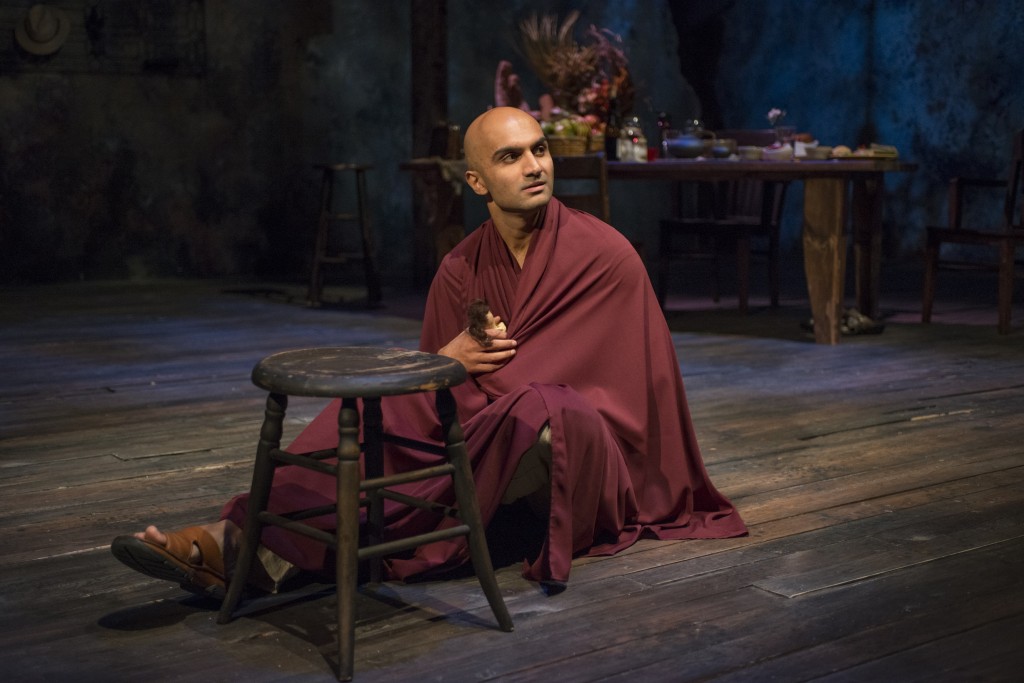 What does it mean to be “let down easy?” When put in the context of being “let down easy” in terms of healthcare, does that idea change? One might interpret the saying to mean when one comes to the end of life there is a peaceful calm. Another might say that when one is ill, it means to have gentleness, a certain kindness in the healing process. Playwright Anna Deavere Smith explores the interpretations of that phrase through interviews she conducted with more than 300 subjects in the Chicago premiere of “Let Me Down Easy,” directed by Bonnie Metzgar at American Theater Company.

Out of the 300 interviews, twenty are part of this production, which also marks the first time “Let Me Down Easy” has been performed by anyone other than Deavere Smith. American Theater Company ensemble member Usman Ally takes on the mighty task of portraying all twenty parts in this one-person show, reciting verbatim what people across the country—from Lance Armstrong to Joel Siegel and people from all walks of life in between—have to say about American medical care.

The set, designed by Yu Shibagaki, is far from clinical, which provides some warmth to the production, especially at times when the interviews feel bleak. The walls are splashed with paint of various colors that absorb light in a soothing way during changes in ambiance, which are cleverly constructed by lighting designer Brian Hoehne. These subtleties, along with a minimalistic costume of a gray t-shirt, khaki pants, and some minor accessories—like a purse or maroon scarf—draw the audience member to the words being said while making Ally all the more believable as any of the people he represents.

The script is wonderfully written and contains many viewpoints from medical professionals, those with religious affiliations, poverty-stricken patients as well as those in positions of privilege. To have a piece of writing span a wide gamut of opinions about a serious topic and still have there be moments of laughter is certainly a feat. An example of this is Ann Richards’ monologue. It starts by talking about how she wasn’t the first female governor of Texas—Miriam “Ma” Ferguson was. Richards recalls how Ferguson stated, “If the English language was good enough for Jesus Christ, it’s good enough for everybody.” She then goes on to discuss her own healthcare battle of dealing with cancer and acknowledges her place of privilege, especially considering her team of doctors and her ability to afford good medical care.

Ally has large shoes to fill stepping into this work, which Deavere Smith first premiered in 2009. However, he is able to utterly transform himself in voice, stature and body language to present himself as someone else, piece after piece. As is only natural, he seems to connect to some pieces more than others, but overall, he is able to embody the characters and stay true to their voices and tell their stories successfully.

Though some of the show’s content is slightly dated (i.e. the interview with Armstrong was done well before he was stripped of all of his Tour de France titles), five years later, the show’s main topic is just as relevant today, if not more so.