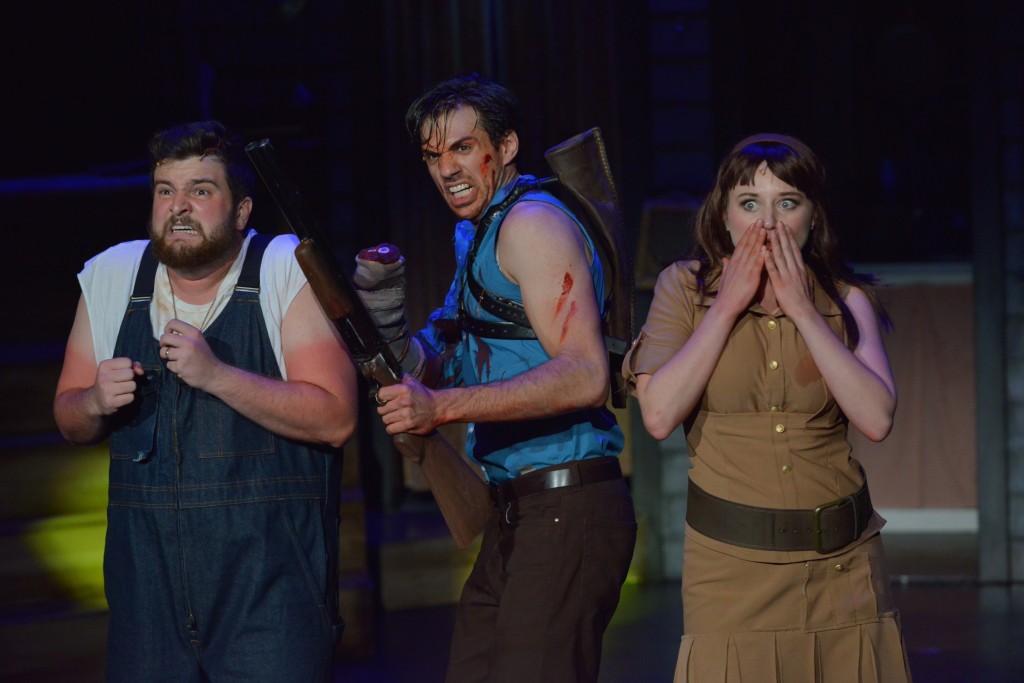 The main issue one encounters when judging a musical based on the “Evil Dead” series of movies is how to pull it off without Bruce Campbell. The beloved B-movie actor anchors the entire series as Ashley J. “Ash” Williams with a unique blend of rugged machismo and Tex Avery madness. It’s not that no one else can wield a shotgun and growl “groovy” during the apocalypse, it’s that no one else is Bruce Campbell. The solution that “Evil Dead The Musical” finds is brilliant in this regard. Instead of trying to find Theater School Bruce Campbell, make the rest of the production as over-the-top as Ash is. In this regard, “Evil Dead” is mostly successful and incredibly fun.

The first act covers the drive into the woods, where the character archetypes (Hero/Hero’s Girlfriend/Dead Meat Friend/Slutty Girl/Fifth Wheel Sister) break into a vacation cabin, find the plot-driving Necronomicon Ex Mortis, raise a whole bunch of evil spirits, get possessed by those spirits, and set their sights on surviving the night.

The early going is enthusiastic but a little broader than it needs to be (so much motorboating!) until Andrew Di Rosa’s farmer-tanned redneck Jake steals the act and nearly the show with “Good Old Reliable Jake.” It’s a hysterical bit of meta-commentary that also addresses the character-building criticisms most often directed at B-horror movies. It doesn’t hurt that Di Rosa sells the hell out of it.

As the second act escalates the stakes, action and violence, the commentary on both horror and musical theater conventions becomes much sharper and funnier. Callie Johnson does excellent work in dual roles as bra-bearing Jezebel/corpse Shelly and take-charge heroine Annie. A sudden jump-scare leads to an exclamation of “What the fuck was that?” which in turn leads to an entire song entitled “What the Fuck Was That?”

“Evil Dead” wears its midnight audience aspirations on its sleeve. A second-act dance number called “Do the Necronomicon” refers to itself as “like the Time Warp, only better.”

David Sajewich, in the unenviable position we describe above, grows much stronger as the show progresses and Ash grows into his role as Evil Dead slayer. Creg Sclavi’s obnoxious best friend Scott, complete with 69 t-shirt, is far better when he comes back dead, flipping the audience the bird and chewing scenery in the very best way. 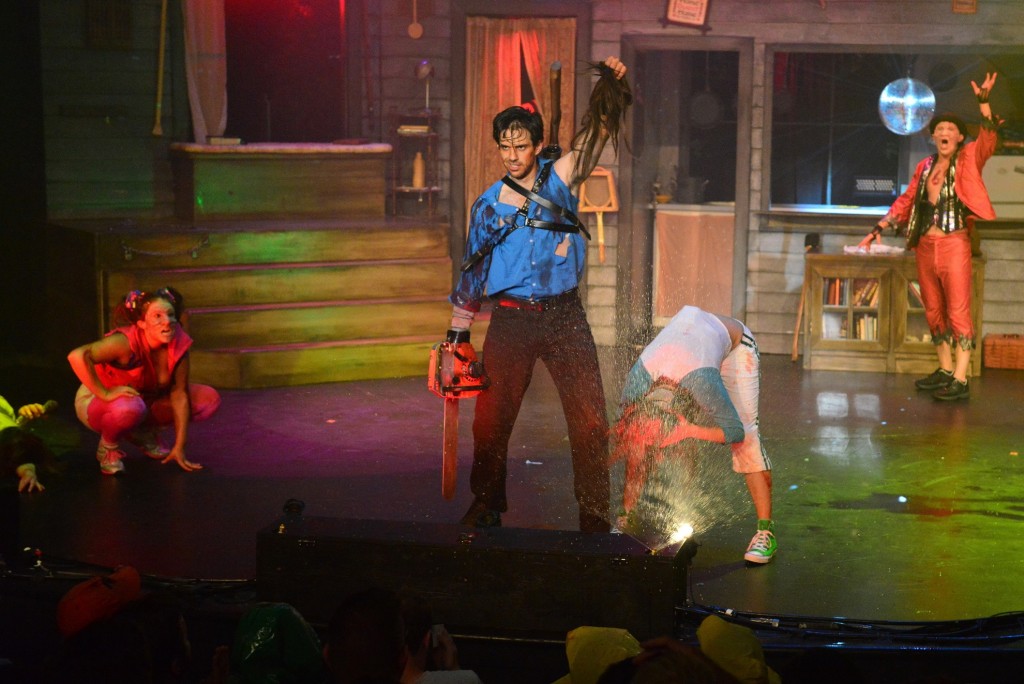 Aside from perfunctory “driving” and “woods” backdrops, Lindsay Anne Black’s stage design of the spooky cabin in the woods is fantastically detailed. All the familiar touchstones of the onscreen setting—cellar trap door, insanity moose, ominous chainsaw—are not only there, but interact with Ash when he starts losing his grip on reality. The only thing that doesn’t pay off as much as one would hope is a singing novelty fish, breaking all sorts of established standards about Chekhov’s bass.

One of the big draws of seeing “Evil Dead” onstage, aside from cultish devotion, is the designation of the first few audience rows as the Splatter Zone. Seats are lined with plastic, a good portion of the audience brings ponchos, and ushers give ticket-holders a look of amused sympathy. Aside from a piece of impressive squib work in the early going of Act I, the blood-and-guts of this show doesn’t really get started until the climax of Act II. But when it does, it’s in Takashi Miike volumes.

In addition to blood pouches built into the costumes of the actors, what one might mistake for floor monitors in another production are actually concealed blood geysers. As Ash brings chainsaw vengeance to his tormentors, the bloodletting is choreographed to soak sections of the audience in concert with the action onstage. The actors, with Tarantino-sized sacks of stage blood and a cringing audience, are more than game. They’re having the times of their lives.

It’s an amazingly effective choice—instead of trying to replicate the visceral gross-out visuals of the movies, the climax has the first few rows ducking for cover under a rain of gore, while the rest of the theater shifts focus to laughing at the poor bastards getting doused. Instead of trying to make stage fighting measure up to a cult classic, they turn the area around the stage into an abattoir.

The blood-soaked audience at the opening-night performance left (through a side door directly onto the street) looking like a few dozen murderers, many of them directly to public transportation. There’s nothing quite like a night of legitimate theater. (John Carruthers)