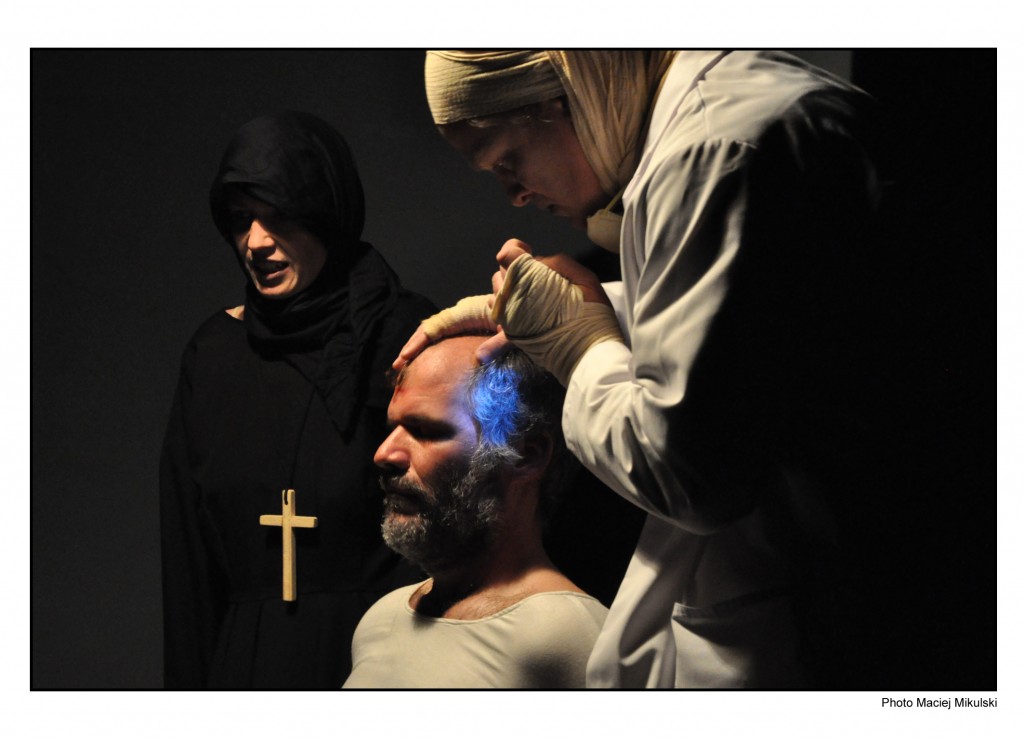 Oh this was barely bearable until everyone lost their bearings at the end. Strong finish, I mean—pushes all my misgivings about the show so far to the fore that it transcends them. Though ignorant of Polish playwright Stanislaw I. Witkiewicz’s suicide, I sat through Trap Door’s production of this adaptation of his “The Madman and the Nun” with a pair of inappropriately appropriate thoughts:

• I would rather kill myself than watch much more of this.

• This seems to be the work of a certain suicide.

My own suicidal ideation (note to mental health professionals: this is merely a creative flourish on the part of this reviewer, who values his own life dearly) was largely spurred on by two factors:

• The delightfully insufferable, nearly relentless, maddening minimalist musical backdrop. (Where can I download this stuff to play on endless repeat?)

• All the goddamn screaming, which in concert with the above makes this a night of auditory torture. (I promptly wore some earplugs after the show, for after-the-fact comfort.)
Merely as an excuse to use the portmanteau “Witkipedia,” which I just coined, I will relay that, per his entry on the ubiquitous online encyclopedia, the vastly talented and versatile “Witkacy” (as the playwright is also known) offed himself while the Nazis were invading his homeland from the west and the Soviets were marching in from the east. The two unacceptable, life-crushing authoritarian forces weighing down on the central character of this play are psychoanalysis and religion. Said central character is mad poet Walpurg (Wesley Walker), who shares Witkacy’s taste for narcotics and who only achieves brief respites from violent insanity by committing acts of violence or cozying up with repressed Sister Anna (Holly Thomas Cerney). While the institution of religion is mocked, not least by Anna’s timidity, lack of any apparent belief and carnal complicity with the murderous but inexplicably alluring hack writer and serial stabber Walpurg, it’s the medical profession that falls under heavy barrage. The attendants are cruel torturers; the overseer of the facility which detains the titular poet is a swaggering nonsensical unconcerned professor; and the primary-care sycophant is a laughably ineffectual, delusional psychoanalyst blinded by total faith in his discipline, a selfish need to successfully “cure” Walpurg, and his own thirsty lust for the hulking brute poet.

Cerney is strangely sympathetic despite being swayed so easily to the vile bard in her charge. Walker is successfully repugnant at the center of it all. At least I think it’s success. The only moments I found myself possibly siding with him were early on, before he first awakens. After that, there’s no one to side with. Once he opens his mouth, it’s clear Walpurg is only superior to his captors in his coarse, murderous honesty. In “The Madman and the Nun,” the mad, free beauty of artistry is seemingly constrained by the true insanity of society and its enforcers. In director Andrzej Dziuk’s staging of this renamed translation, everything and everyone has already gone rightfully to hell, except perhaps Sister Anna who takes the shortest route there on the arm of the devilish Walpurg.

This far into the twenty-first century, all the jokes at the expense of psychiatry are old hat, and the “artist-as-madman” trope has been mined bare. The stage movements are often as assaultive as the aforementioned sonics. The lead character is insufferable, as are all those around him save none perhaps the nun. It doesn’t jibe with my admittedly inexpert reading of the source material; indeed it’s much uglier—which I had not considered a possibility. Yet I’m recommending you go see it, if you think you can endure it. I’m not even offering my reasoning. You want some understanding of my thought process, talk to my analyst. (Raymond Rehayem)