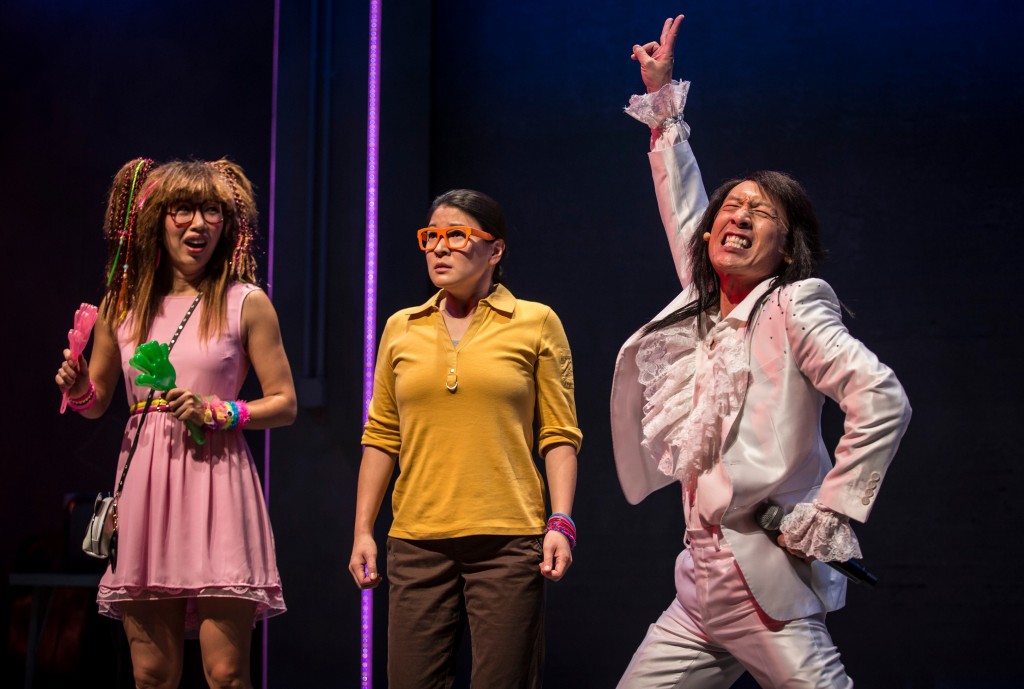 In the couple of years since I saw “The World of Extreme Happiness” as part of Goodman’s New Stages festival, the humor has become a little sharper, the production has grown notably grander, but the tone has remained personal, almost intimate, despite the sweeping topics it addresses. To demonstrate the inescapable dreariness of a peasant girl in rural China whose dreams of financial success turn toward loftier horizons, Frances Ya-Chu Cowhig’s script exhibits nearly as many facets as the oft-mentioned, ever-changing Monkey King. Family melodrama, broad humor, sloganeering and a little gore combine to reveal country girl Sunny’s dream of modern urban life as a horrendous and hopeless nightmare.

If you’re past a certain age in Sunny’s stark and bleak contemporary China, you’ve already been crushed and or compromised, if you weren’t corrupt all along. Sound like a place you know? Some are crushed and corrupted in comfort—like the affluent, powerful pair whose machinations lead to the PR stunt with which this show climaxes—while those less fortunate compromise for the smallest reward: a coercive hand job on the factory floor, or some cash in exchange for marrying off your daughter. The young’uns we meet, aiming for the stars, meet degradation of the lowest order. Suckered in by their own dreams, and the hucksterism of upward mobility, today’s youth from the country are no less grist for the big-city mill than the victims of Mao that the crusty old factory hand bemoans.

Sunny, an unwanted child to put it mildly, dreams biggest and suffers the most for it. The only joys any of the characters attain or approach are fleeting at best, ill-gotten if noteworthy, and most often illusory. Between generations the familial bond means nothing. Sunny and her younger brother share a genuine love, but her parents view her as just another in a line of devastating disappointments—one more girl to be killed at birth. Allowed to live because she smiles from the swine-slop bucket she was disposed in, she appeals to her father as merely a commodity—first as some “thing” which can be sold into sexual servitude at the earliest opportunity, later conversely to be bound for a fee in chaste marriage to a dead man who dared rail against working conditions. It is implied that the dead man, son of the village midwife, may have been saved had Sunny’s father Li Han cared enough, or dared enough, to warn the younger man of the risks of rebellion. But Li Han saves all his concern for his racing pigeons, who we repeatedly see he loves and values far more than his daughter.

All the dread horror of an unholy state alliance of capitalism and communism is on display here: Total police control, absolute political oppression, exploitation of the masses masked with spiffy marketing. Certain scenes drag a little—particularly the overly expository exchanges between the affluent pair as they reminisce about their humbler beginnings and contemplate how to secure their future.  At times the overtly obvious messaging and occasionally maudlin sentiment override the moment. But for most of its two hours, director Eric Ting’s production succeeds on the dynamism of the interweaving narratives, the drive toward the unifying climax, and the fearlessness of the performances.

Aside from Jennifer Lim, completely convincing as Sunny through all her changes, the cast take on multiple roles and imbue each character with such individuality that this device is never distracting nor in the slightest bit gimmicky. Francis Jue is enthrallingly distasteful as Old Lao, the callous jaded factory veteran, and humorously over-the-top as self help charlatan Mr. Destiny. Jo Mei is frigid, calculating and hateful in her police role, while engagingly bubbly and likable as Sunny’s sweet, selfish friend Ming-Ming. Ming-Ming, all enthusiasm and optimism on the surface, zealously adheres to self-help dogma to stave off the fears of her own lack of opportunity and impending loss of cherished “capital” (her youth). Ming-Ming turns Sunny on to the transparent teachings of Mr. Destiny, who throngs of their fellow toilers at the Jade River factory flock to for answers and hope. The faux guru inadvertently, cluelessly “helps” Sunny off to her final destiny.

The self-help culture is such a prime motivator of the action, it serves as stand-in for religion (which the wealthy factory head cynically bemoans is missing from the lives of Chinese laborers). To put a wicked Western twist on this, if Sunny is Dorothy and the factory town Shenzhen is her dark Oz, sadly there’s even less behind Mr. Destiny’s curtain than the Wizard has to offer. As exploitable in the city as she is expendable in the country, Sunny finds for a poor farm girl who wants to realize her dreams and improve the lives of her fellow Emerald City migrants that no place is home. (Raymond Rehayem)