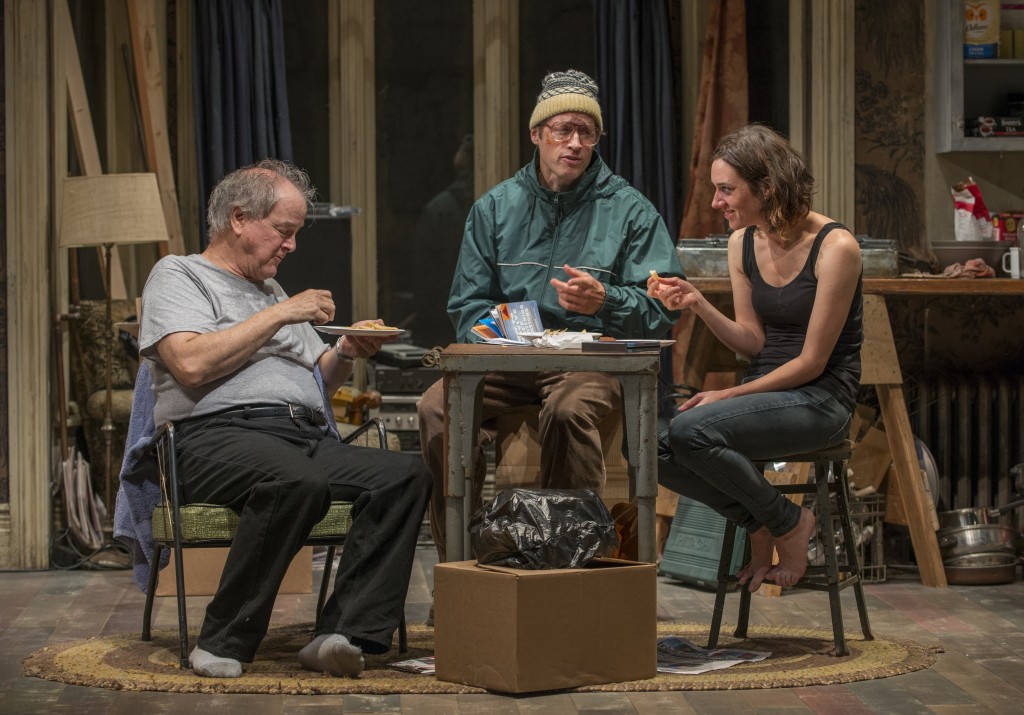 Disheveled, rundown and struggling for work, aging Tommy (portrayed with a lived-in sort of grace by Francis Guinan) lives in a disheveled, rundown room in his uncle’s aging house (the set design by Todd Rosenthal evokes both comfort and dilapidation). His sweet but slow-on-the-uptake friend Doc (Tim Hopper, brilliant at being less than brilliant) works with him (when there’s work) and sometimes crashes at his place as well. It’s clear the two have established a sort of lovingly codependent repertoire—the kind of friendly frankness and ongoing arguments that long-time compatriots develop—with each other as well as with Tommy’s landlord, the often drunk Uncle Maurice (a captivatingly gruff M. Emmet Walsh).

When Tommy comes home late one night with the injured Aimee (Helen Sadler, in a strong turn as a troubled young woman) the dynamics of his life shift. It’s nothing earth-shattering, but it’s enough for Tommy to take another look around his living quarters and realize how shabbily he’s caring for them (and for himself)—though he’s set in his ways enough that he doesn’t do much to change either. And though Aimee means him no harm, she’s not necessarily the saving grace he’s been looking for. In fact, she causes a lot more trouble than she intends.

Irish playwright Conor McPherson’s script walks so many tightropes seemingly effortlessly that it’s never clear what will happen in the next moment and—more importantly—what emotions will be evoked. From subtle but laugh-out-loud comedy to delicate sweetness to creeping dread, director Henry Wishcamper finds a way to evoke a steadily evolving string of feeling from his cast with performances that are as heart-rending as they are endearing.

Describing the plot seems almost inappropriate in this case so I’ll just point out a few moments that encompass the breadth of the show: a tension-relieving impromptu dance party between Guinan, Sadler and Hopper to Marvin Gaye’s “What’s Going On,” a mesmerizingly suspenseful exchange between Hopper and an intimidating and perfectly cast Dan Waller that sneaks up on you, Walsh delivering an existential monologue with such precision that the air in the room seems to change.

There’s a lot going on in this show—and the expertly drawn (and acted) characters combine with the steadily moving plot to carefully guide the audience through the course of its intermissionless one-hour-and-forty-minute-long run. It’s a surprisingly emotional trip, and it’s not one to miss. (Zach Freeman)