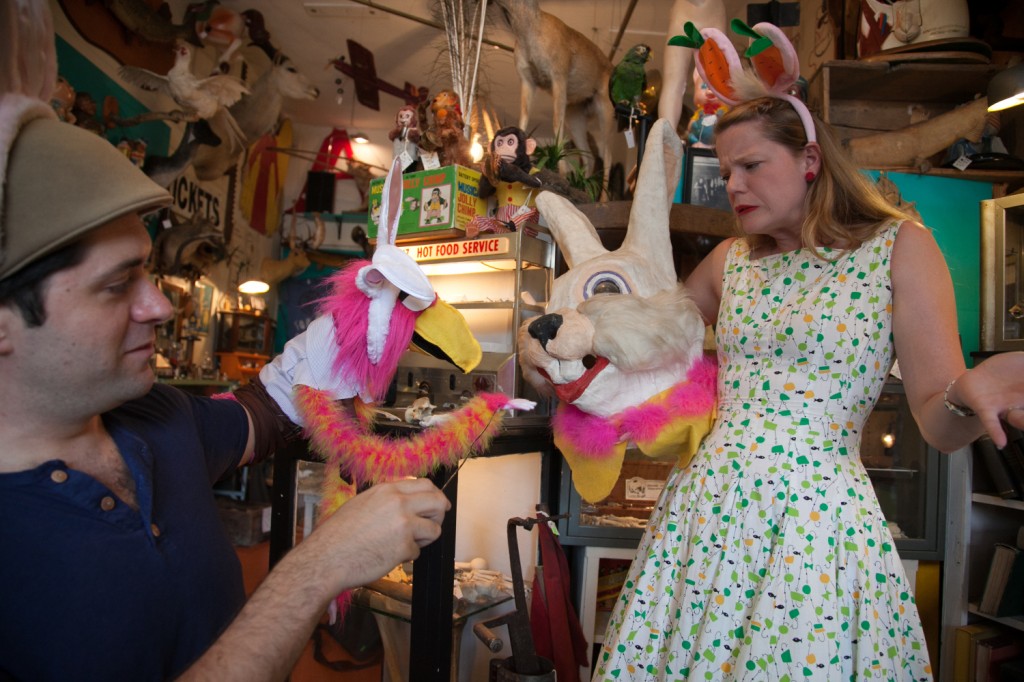 “Alice’s Adventures in Wonderland” provide wonderful delight to readers across generations and endless inspiration to artists across disciplines. Right now (this is speculation) several males, females and individuals refusing to identify with a binary gender designation are renaming themselves “Alice Liddell” all over [email protected]øøk in surreal protest of that site’s “real name” policy.

You too shall be rechristened Alice when you opt to go down the rabbit hole (and up and down several flights of stairs) at Upended’s revival of Noelle Krimm’s multi-venue, hop-around-the-‘hood “Alice.” Upon arriving at the Neo-Futurarium the other “guests” and I were name-tagged, and shortly thereafter chastised (albeit gently) by our hostess. Hosts vary; for our 1pm tour a very demure Mrs. Rabbit (Dina Marie Walters), frequently consulting a Betty Crocker book to validate her stances on proper party etiquette, guided us through a variety of nearby Andersonville establishments (bar, resale shop, that Swedish museum…) to provide us all a glimpse, through Alice’s eyes, into each of the dozen chapters of Lewis Carroll’s allegedly nonsensical, cogently illogical masterpiece.

The twelve stops are sometimes slight but at least all entertaining. Each chapter is brought to life by a different artist or theater company (okay, the Neo-Futurists, ShowParty! and Striding Lion each take on a pair of chapters). Perhaps ironic for a theater event, but indicative of film’s ability to encapsulate an entire other world between the borders of a screen more successfully than stagecraft can generally achieve, the most surreal segment is actually a short from filmmaker Logan Kibens. Her take on Chapter 6 is the only one that really captures the manic zaniness of Carroll’s free, wild, but carefully crafted style. The short itself, wonderfully shot and expertly played, isn’t the only reason this is the most off-the-wall section of the afternoon. It also benefits from being set in the most curious location. While the other chapters unfold indoors, Chapter 6 is screened in an alley on a TV in the back of a minivan, with ridiculously small servings of popcorn thrown in for good measure. In a similar way, little absurd moments set up on sidewalks throughout the neighborhood benefit from spectator surprise as well as from their very fleeting nature.

Other standout vignettes include the most interactive portions, like the tea party and croquet game led by the ShowParty! collective. A headier but equally captivating highlight is the eleventh chapter from Sid Branca & Amanda Fink, staged in a pet supply shop, wherein the trial over the tarts becomes a sort of nonsensical polemic attack on meaning and ownership while revealing much truth through almost aggressive wordplay. Addressing, or slightly assaulting, a sense not engaged in the other installations, Chapter 11 is all the more bizarre for discussing glorious, irresistible tarts in a setting that—though clean and pleasant—frankly smells like a cross between dog grooming and pet food. Upping the penultimate chapter’s ante of antagonism and playful possible peril, slam poet ensemble Sophisticated Cornbread corrals everybody into an alleyway for Alice’s (our own silent) testimony—all under the threat of beheading, which despite current events has admirably not been excised from the climax. (Raymond Rehayem)