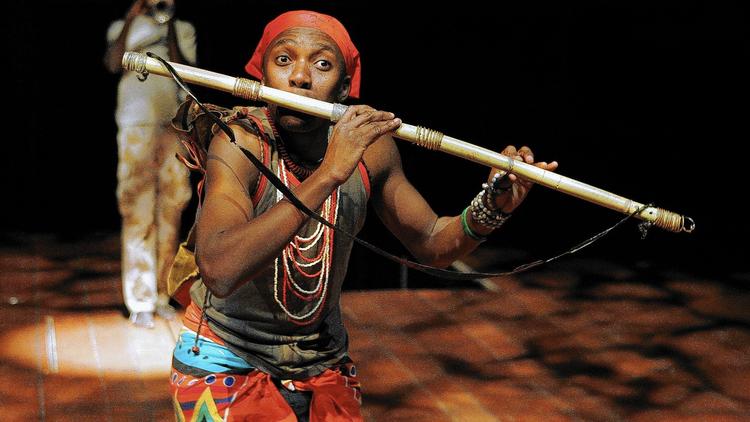 “The Magic Flute” is one of those indelible works of art. Even people who do not like opera will perk up when you mention it’s being performed. Its musical refrains such as the Queen of the Night’s aria and Papageno’s duet with Papagena have imprinted themselves on the popular consciousness. When you see the “Magic Flute” for the first time you think to yourself, “Oh, that’s what that’s from.”

Of course the flipside of this is that it’s easy to become inured to its charms. There are so many productions going up all the time that “The Magic Flute” seems to be just woven into the general social contract, as inevitable as streetlights or the 7-Eleven. Even productions that promise some kind of twist in the staging—such as the pretty ludicrous production I saw in college that came with the sleek, black and chrome modernity of a Sharper Image—offer little more than a change of drapery around the same old view.

So when Chicago Shakespeare brings a thing like “Mozart’s The Magic Flute: Impempe Yomlingo” to town, it is really a cause for celebration. Created by South Africa’s Isango Ensemble in association with The Young Vic, “The Magic Flute: Impempe Yomlingo” brings new, full life to a piece that so often feels like a zombie: perambulatory sure, but still unmistakably dead.

Director Mark Dornford-May has given the opera a full transfusion of African music and dance and ritual. The team of Pauline Malefane and Mandisi Dyantyis rearrange Mozart’s entire score for marimbas and hand drums. Staid group numbers become explosions of movement with performers and musicians alike dancing to tribal harmonies, calling and responding with verve and vigor and most important of all, joy.

And the more I think back on it, the more that single word, joy, holds within it the key to why this thing works. Joy is not just happiness. It is an outburst: a shout or a guffaw or an unrestrainable “Yippee.” It is when so much happiness is inside of you that you have to let it out or you might burst. And because joy is so wild, so uncontrolled, it is exactly the last thing you would expect to find in an opera; for opera is a medium that operates on control, even for the comedic ones. The control of the voice required to just sing the things turns most opera singers into stiff, unyielding sentinels onstage. It is a medium that, in this writer’s opinion, suffers from a debilitating case of “Augustness.” It so often collapses under the weight of its own history, and importance and history of its importance. What the Isango Ensemble does that is so wonderful is it substitutes importance for good old-fashioned fun. (Alex Huntsberger)