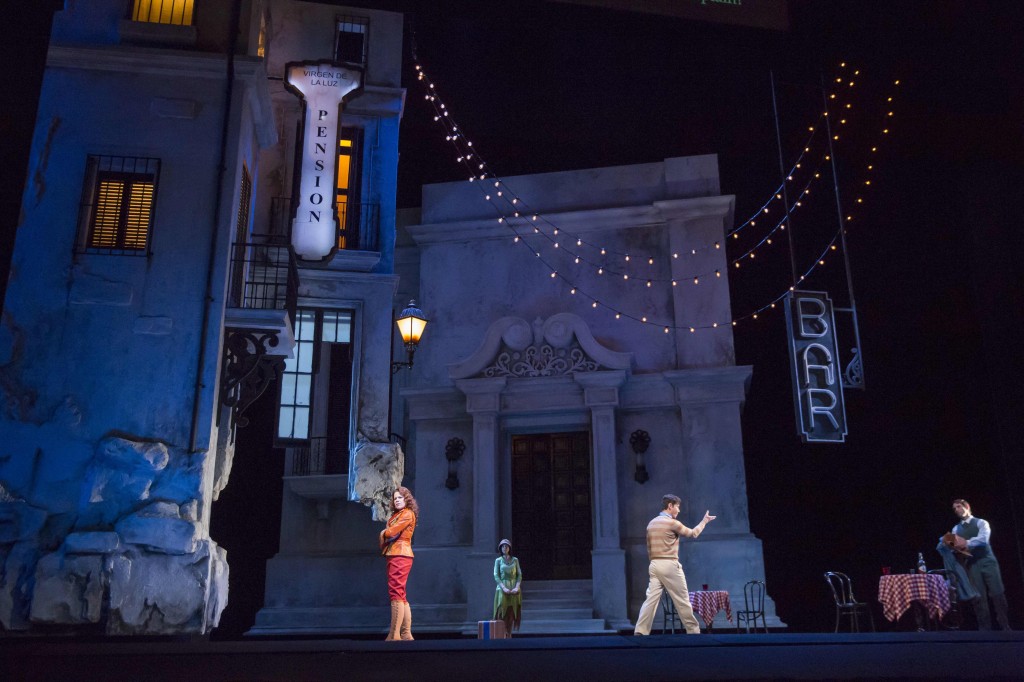 As an undergraduate at the University of Chicago decades ago, a friend suggested I take a class called “The Political Plays and Prefaces of George Bernard Shaw” because it was an easy A and, as a bonus, a great course. Not only did it live up to its billing, but it sparked my nascent devotion to the works of Shaw and a deep respect for his intellect. And one of the things I never forgot from our classroom discussion of “Man and Superman” was that Shaw considered Mozart’s “Don Giovanni” the greatest work of art ever created. No small praise from one of the greatest playwrights in history.

For no good reason, it took me decades to see the work myself, allowing that superlative to age untested in my memory, albeit leavened by the more measured expectations that a lifetime of arts consumption affords. Nevertheless, when Lyric Opera announced it as this year’s season opener, Shaw’s enthusiasm was the first thing I thought about. The second was that a director whose work I’ve admired at the Goodman Theatre where he’s artistic director, Robert Falls, was at the helm, ensuring an interpretation unlikely to get stuck in an unduly reverential treatment, like a musty old museum relic.

And so it does not. Falls’ work at the Goodman always seems to “go big” in both design and ambition; here on the Lyric’s far larger stage and cavernous auditorium, he has found an arena where his scale generates not a spark of friction of conflict with its confines.

Moving the story of Don Juan from its eighteenth century origins to circa 1920s Spain proves to be a great decision by Falls. It manages to strip the production of stuffy periodicity while placing it into a time more familiar to the contemporary audience yet distant enough that the story’s messy morality seems plausible. And stuffy it is not: sexuality oozes throughout the production, with Don Giovanni’s hands literally all over the women he plays with. The party at the end of the first act (the opera is divided here into two halves, with a half-hour intermission dividing its two ninety-minute segments), is played as a pansexual orgy, conveying a strong sense for the license and entitlement Don Giovanni felt. As a gentleman of substantial means, his sexual conquests, crossing all class boundaries, comment on the seductiveness of money and power (compounded here by the physically stellar specimen of Mariusz Kwiecien, a veteran of the role of Don Giovanni, who seduces the audience at the same time with his voice, his looks and a charismatic boyish charm). The protests of Donna Anna (played with upper-crust reserve by Marina Rebeka, with a voice to melt the firmament), whose outcry against Giovanni’s advances at the opera’s outset leads to her father’s death, seem at first to be the exaggerations of a lover spurned, especially when soon echoed by Donna Elvira, another spurned lover. (Ana Maria Martinez, in this role, is another highlight of this production. Costumed in bright colors, she exudes both sensuality and vulnerability, serving as the proxy for womanhood’s susceptibility to Don Giovanni’s charms.) 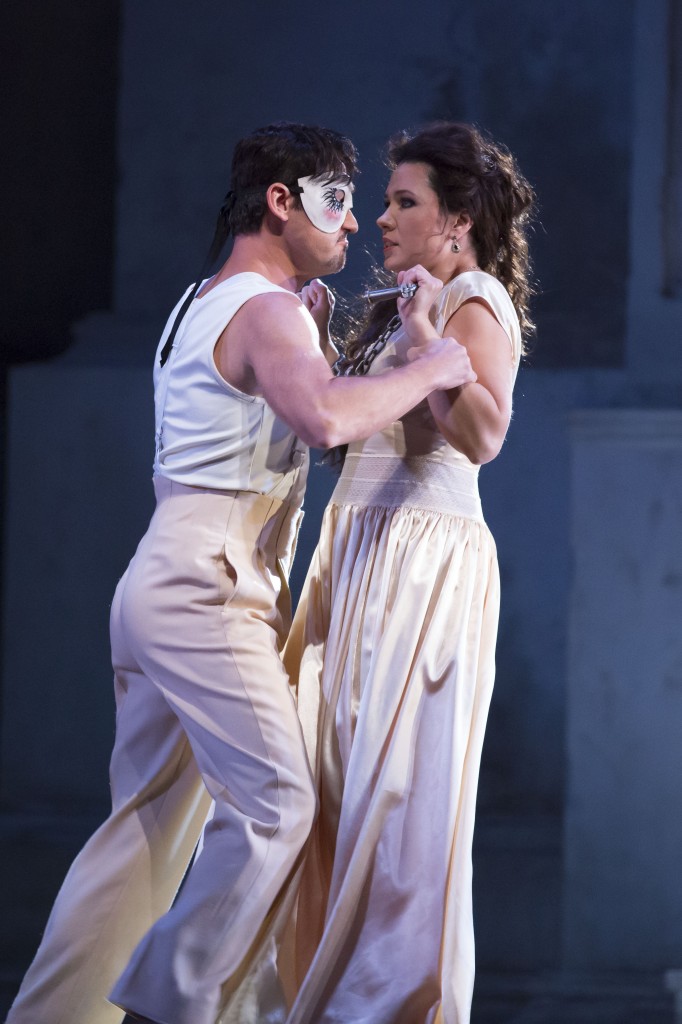 By the second half, notions of Don Giovanni as an innocent seducer (in today’s parlance, the type who seem to self-diagnose as “sex addicts”) gives way to a much darker portrayal of a sexual predator, a serial rapist even. The audience, by getting caught up in the seduction in the first half, becomes complicit in his crimes in the second, in much the way contemporary society still grapples with crimes of sexual violence. (Giovanni’s sidekick, Leporello, conveys all the ambiguity of the audience in his character: he’s both appalled and seduced by his master’s behavior, willing to partake in Giovanni’s “leftovers,” eager to be paid off when his indignation tilts against Giovanni and, ultimately, nonchalant about betraying him. It’s a pretty dark mirror, eh?)

In Mozart’s world, any ambiguity about Don Giovanni’s actions eventually give way to a clear and definitive punishment: Don Juan dies and goes to hell. Nowadays we debate whether “she asked for it” and only three percent of rapists ever serve a day in prison.

Though “Don Giovanni” is an old story told many times before—and an opera with special significance for the Lyric, since it was their very first sixty years ago—its remounting compels a conversation about the gender dynamics within it. (Consider, for example, the colloquialism “he’s a real Don Juan.” We have a cultural habit of admiring, of envying the persona of the libertine. Though this portrayal is not the only one in a long literary history, you might give pause the next time you’re tempted to describe someone thus. Do you really want to equate serial romance with sexual violence?)

Donna Anna’s “transformation” in perception, from seeming to be playing hard-to-get to being clearly an attempted-rape victim, is less a transformation than an indictment of the viewer’s moral compass. Why did we take her initial protestations as anything other than their literal content? We’re so encoded to the idea of seduction being a game of no-means-yes that we can’t receive our own language in its own terms.

“Don Giovanni” projects an ambiguity of its own, no doubt: is some of his seduction successful on its own terms, and some consummated by force? When the target is a member of his own class (Donna Anna), physical force seems to be required. But when it’s someone of a lower class, a peasant even (Zerlina), the implicit threat to a person’s safety and livelihood likely suffices to “seduce” the target. Today such imbalanced power in courtship is called sexual harassment, or worse.

The character of Donna Elvira is more problematic to the reading of Don Giovanni as nothing more than a sexual predator. The woman scorned, she alone seems susceptible to his charms as an affair of the heart, not the gunpoint. Of course, it’s unlikely that considerations of “rape culture” were in the mind of Mozart or librettist Lorenzo Da Ponte when it premiered back in 1787.

It’s clear that such concerns are in the minds of the Lyric, as they published a provocative essay by the University of Chicago’s Martha Nussbaum in the program, entitled “Rape, Revenge, Love: The Don Giovanni Puzzle” wherein she grapples with the same topics, though through history, and without the benefit of this production, in debunking the romantic interpreters of the opera’s story. That such interpretations exist at all are a marvel, as the text and certainly Falls’ production leave little question as to the nature of Giovanni. 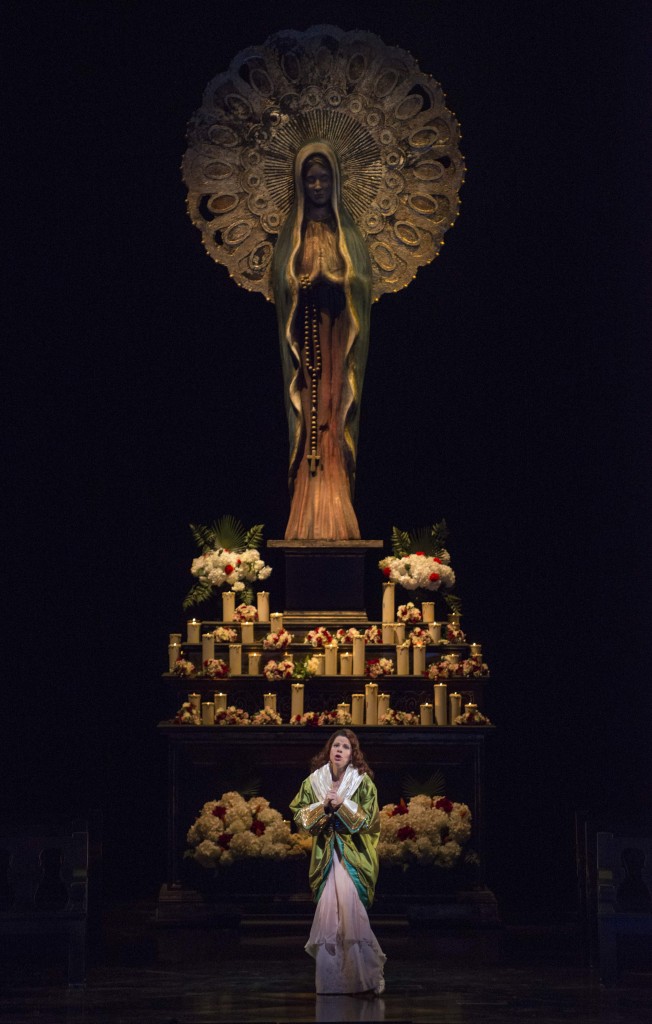 Part of the strength of this production is the evenness of the performances: No singer “steals the show”—which itself can tilt the audience’s emotional balance—likewise none under-project in any detrimental way (though Kyle Ketelsen’s Leporello gets lost in the orchestration at times). Simply put, vocal and musical performances are, across the board, topnotch. And, not surprising given the presence of a theater specialist at the helm, the acting is a cut above the usual opera production, and the comedy genuinely funny.

Consistent with Falls’ unconventional creativity, lovely little touches abound, like the sound of a Spanish guitar underlining a cappella passages, or the remarkable orchestral feat of creating the sense of sound playing from an onstage radio, rather than the pit.

Art direction is especially noteworthy. The contributions of frequent Falls collaborators Ana Kuzmanic (costume design) and Walt Spangler (sets) deserve equal billing with the performers. The production lives in black and white and gray, but splashes of color—blood, flowers—transcend decoration and become metaphor for the proximity of sensuality and death herein. The set evokes its time with neat little touches like a period-appropriate neon sign with the word “bar” hanging in a void, creating a sense of place with its minimalism juxtaposed against an elaborate creation of a Spanish streetscape. I found myself especially contemplative of the design in the second half, where that same Spanish streetscape virtually hangs off to one side of a dark stage, creating an asymmetry that echoes the acts of the morally repulsive Don Giovanni, soon giving way to a completely symmetrical scene in a church, where the moral order seeks restitution.

The greatest work of art ever? Perhaps in Mozart’s time, and Shaw’s as well. Today? I can’t even figure out my ten favorite movies for Facebook, so the idea of ordaining a centuries-old creation the best ever is not in me. But Robert Falls certainly makes a strong case. (Brian Hieggelke)