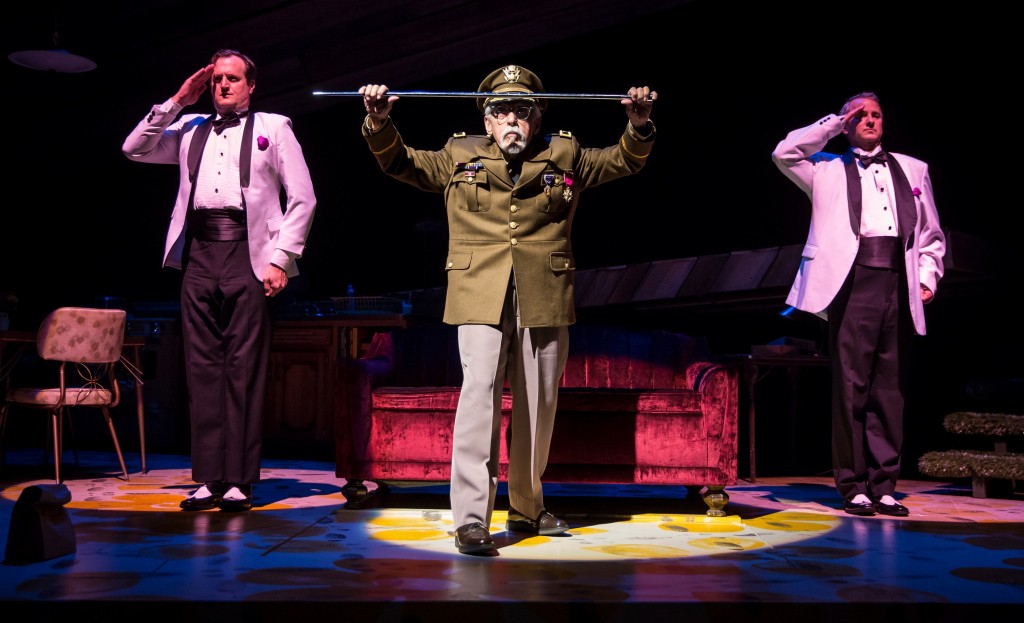 At a point early on in Noah Haidle’s moving morality/mortality tale, troubled father Daniel (a world-weary Eric Slater, effectively straddling inner sadness and external buoyancy) reads from the daily newspaper to his adoring daughter Beauty (Catherine Combs, delicate and stalwart in equal measure). He is reading about a new discovery: the shape of human DNA. As Daniel expounds on the story to Beauty, he traces the double helix shape through the air with his finger. It’s a beat that director Anne Kauffman wisely chooses to slow down and draw attention to, though the audience may not understand the full significance in the moment. But by the end of this rather mind-bending walk through several generations of interwoven lives within one family (with most of the cast playing multiple characters), it’s abundantly clear how that little twisted ladder pattern affects us all in more ways than we can imagine.

Last year “Smokefall” had its world premiere in the Goodman’s smaller Owen Theatre and set the record for highest number of individual tickets sold in the Owen’s history during its run. Now it has smartly been given a second life (with the original company intact) in the larger Albert Theatre space during the Goodman’s ninetieth anniversary season. And though I didn’t see the original production, this is a show that certainly feels at home in the Albert, with Kevin Depinet’s ambitious combination of abstract and realistic set design filling the space with a familially familiar living room that bends to the will of even the most metaphorical and nonsensical aspects of this twisty-turny narrative.

And, just like in the DNA that we are all made up of, there are many twists and many turns. Starting out, expectant mother Violet (a wistfully hopeful and quietly powerful Katherine Keberlein) prepares breakfast for her small family: husband Daniel, daughter Beauty and her elderly father, who just goes by “Colonel” (played with astounding brio by Chicago stalwart Mike Nussbaum). In the background, Guy Massey, all charisma and pep, distributes a series of twenty-six footnotes to the proceedings, giving the production the slight feel of a novel, but without the expository drag that this type of narrative choice typically evokes.

As the morning unfolds, it becomes clear that despite appearances to the contrary it is not just an average morning for this family. The effects of the choices made this morning will reverberate throughout several generations (just as we are shown how previously made decisions affected the current moments). But despite how events and characters wind around and through each other, Haidle’s narrative flow stays remarkably crisp and clear, thanks in no small part to Kauffman and her able cast. Even a lengthy discussion between two fetuses that feels out of place—entertaining and informative, but out of place—retains a sense of heft that its overly intellectualized dialogue would not sustain on its own.

“The greatest possible act of courage is to love,” says Nussbaum’s Colonel, with authority and passion. “And anyone who says different is an asshole.” Vonnegutesque quips like this hit hard in unexpected moments, especially when Nussbaum is the one delivering them. Haidle has a grasp on simply put dialogue that holds heavier significance than surface-level observation would reveal. And “Smokefall” is the kind of show that continues to reveal deeper meanings and relationships the more you reflect on it and discuss it—no wonder it sold so many tickets the first time around. If, like me, you missed it the first time around, don’t make the same mistake twice. As you’ll learn, your family can be impacted by your decisions for generations to come. (Zach Freeman)