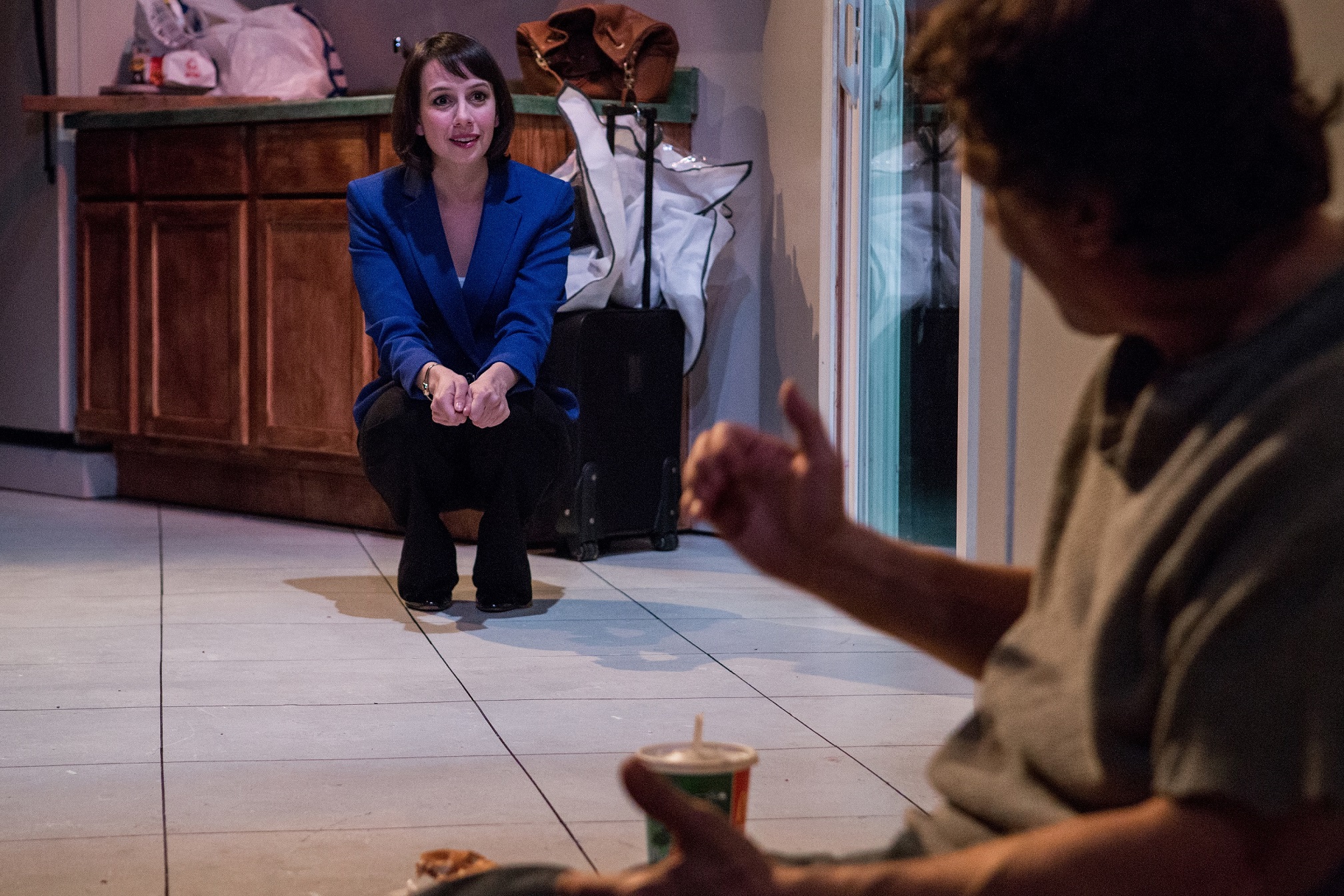 The Gift might be the place I would take an out-of-towner in order to describe the phenomenon of Chicago storefront theater. The lobby is about the size of a modest walk-in closet and the space itself not much larger. (Okay it’s a fair degree larger, but living in Chicago for any amount of time really does warp your ideas about what to consider a “small” theater.)  The space is a narrow and thin one, with a few dozen seats crammed up against one of the walls, laid out in the three long rows with nary the leg room to spare. The acting space, too, is notable for its length relative to its width, with the former dwarfing the latter, which dictates a fairly narrow (in both senses of the word) range of options when it comes to staging.

However, it is from these limitations (not just in spite of them) that the artists at The Gift can make magic. The shape of the space dictates a forced intimacy that, the way they play it, never feels forced at all.

Director Marti Lyons uses this space to wonderful effect in her new production of Laura Marks’ “Bethany” by using the set and staging to emphasize the play’s claustrophobic undertones (and overtones, and regular tones and, really, all the tones). The play is set half in an abandoned, recently foreclosed home and half in a failing Saturn dealership, the vice-grip of financial ruin closing ever tighter around its characters. Lyons and set designer Courtney O’Neill cover the entire back wall from floor to ceiling in cheap vinyl siding, effectively closing in the stage. A sliding glass-door in the center only emphasizes this because literally the only thing you can see through that door is the siding. One can instantly picture an entire row of homes, packed tightly against one another to maximize the profit margins of the developers. No breezes, no sunlight and, now, no people either. The walls of the house are blank, marked only by smudges of dirt, the kitchen counters and cabinets devoid of life. Before the show even begins, you’re already in a wasteland.

And then once the show does begin, you feel lucky. It’s now only the characters who are stuck traversing the economic muck. You are safely hidden in the dark. Following a brief prelude during which a lantern-jawed James D. Farruggio secretes a noxious business-motivational  speech, the action commences with Crystal (the brilliant Hillary Clemens) breaking into a recently foreclosed-upon home only to find it’s already being squatted in by Gary (Paul D’Addario), a transient conspiracy theorist. Despite being employed at the aforementioned Saturn dealership, Crystal has recently lost her home and so also lost custody of her daughter. She will stop at nothing to get her daughter out of the foster care system, and that brings her into contact with the odious speech-giver. His name is Charlie and when he waltzes his way into the dealership looking to buy a very expensive car, Crystal sees her ticket back to normalcy. Positioned between the living embodiment of capitalism on one-hand and the embodiment of “opting out of the social contract” on the other, Crystal decides to… well let’s just say that Crystal learns both the value and the cost of self-actualization.

The trio of Clemens, Farruggio and D’Addario is an excellent one, and the battle of wills between them makes for a thrilling show. Lyons directs these tete-a-tetes with a steady hand, using silences and simple staging all in the service of driving the tension ever higher. Clemens in particular is just fantastic. She understands that Crystal’s desperation is also the fuel that stokes the fire. Marks has presented a story that is as much about sexual politics as it is about financial power. In fact, it’s really about how the two can be intertwined. Gary wants to save Crystal by taking her and her daughter (the titular Bethany) out into the woods and starting over, leaving society and all its attendant financial burdens behind. Charlie on the other hand has intentions that are far less noble and knows that the power to get what he wants is one hundred percent monetary. It is a testament to Marks, Clemens and Lyons that Crystal navigates these two opposing forces, this Scylla and Charybdis, with such empathetic but un-precious clarity. Crystal does good things. She also does very bad things. What’s so wonderful is that you are never left wondering “Why?”

I will say that, when asked how to describe the script, the best I could do was “It is half of a truly great play and half of a good one.” There is a particular deception that happens down the back-stretch that, while wholly in character, struck me as just a little too… clever. That even someone as wily as Crystal could come up with such a thing on the spot was something I just plain couldn’t buy. In contrast, there is also an astounding act of violence (disturbingly well-choreographed by John Tovar) that seems outlandish in a vacuum but has a kind of Greek-tragedy sense of inevitability to it. This was always going to happen. It was just a matter of when. And the amount of time that Lyons spends in the aftermath, just letting the mundane details of it all play themselves out is perfect. It stays with you long after you leave. (Alex Huntsberger)