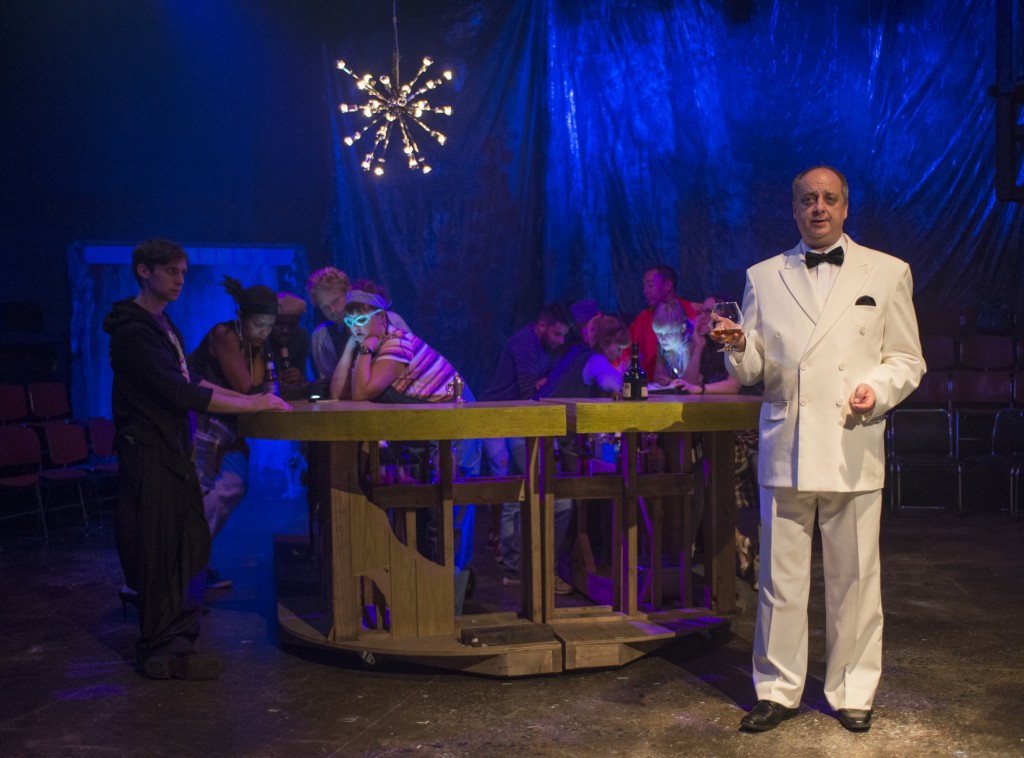 When I tell you that the House Theatre’s newest show is a theatrical adaptation of “Moby Dick” that is also about a theater company attempting to put on a theatrical adaptation of “Moby Dick” and is also a three-and-a-half-hour-long minor epic and is also a meditation on the evolution of the House Theatre itself while also being a meditation on the relationship between theater and theater criticism and is last but not least heavily steeped in the minutiae of the Chicago storefront theater scene, I know exactly what you are going to say. You are going to say “Oh that is exactly the kind of show that I have been longing to see and I will definitely be buying my ticket immediately.” Well here’s the thing, you hypothetical straw-man sarcastic jerk: it is, and you should, and yes immediately.

Written by Shawn Pfautsch and directed by Jess McLeod, “Season On The Line” is indeed all the things I have mentioned above. It is clearly not a show that is afraid of appealing to too broad an audience, even as it actually is a show with broad appeal. It is a story about being in love with this crazy thing that you do whilst simultaneously realizing that being in love with this thing is in and of itself totally crazy and you should probably start doing something else before this destroys you. It is one-hundred-and-ten-percent a play about a play and also one-hundred-percent a show just about being a human being trying to connect with other human beings. And at three-and-a-half hours, it is actually able to be 200-percent of a show, without ever seeming longer than, oh, say, two-and-a-half. (Try telling someone that a show was a “fast” three-and-a-half hours some time. It gets a great laugh. Or an expletive. Or both.)

Serving as our Ishmael is an unnamed Assistant Stage Manager played charmingly by Ty Olwin. Through his eyes we are introduced to the Bad Settlement Theatre Company, a ragged but intrepid band of theater artists whose best days (or at least their best reviews) might be behind them. Olwin signs on as ASM for a three-play season consisting of “The Great Gatsby,” “Balm in Gilead” and the artistic director’s passion project, “Moby Dick.” His work on each show comprises one of the play’s three acts and, while the plays themselves are kept wisely off-stage, each act culminates with the review of the Only Theatre Critic Who Matters, Arthur “He’s Clearly Chris Jones” Williamson, played with Bond-villain relish, and a white suit to match, by Sean Sinitski.

The Ahab in this equation is the Bad Settlement artistic director Ben Adonna (the psychotically good Thomas J. Cox) while Williamson serves as his great white whale. Still stinging from Arthur’s one-star review of his previous Moby Dick adaptation, Adonna will not be stopped from making a show that Arthur will adore, even if it means threatening the financial stability of Bad Settlement in order to do it. In adapting Melville’s discursive style, the show is not afraid of going down a warren’s worth of rabbit holes, but if there is a single unifying thesis for “Season on the Line” it would be: don’t make art for the critics. Just make art, and they will critique it. But it would do the show a disservice to boil it down to only that statement, just as it would be a disservice to “Moby Dick” to boil it down to “Just let it go, dude. Seriously.”

The supporting cast is one of the show’s strengths with colorful turns no matter which way you turn. There is Maggie Kettering as Day Starr, the Bad Settlement Stage Manager and, of course, resident only-sensible-person. There is Shane Kenyon as the former ensemble member turned Hollywood star who has deigned to return to star as Ishmael. Kenyon nails the particular brew of ego and insecurity that makes every actor (and especially every successful actor) tick. Danny Bernardo plays Kaku, the fabulous and wise actor who serves as Queequeg for the young, impressionable Olwin. And Christopher M. Walsh makes the most of his scant dialogue and even more from his numerous silences as Joao, the surly, expatriate Technical Director and “whaling expert.”  Mary Hollis Inboden also has to be given credit for her performance as lighting designer Ashley Salt, mostly for being the perfect embodiment of every lighting designer that has ever lived, ever. Excerpts from her future memoirs provide probably the most enjoyable rabbit hole in the entire show. 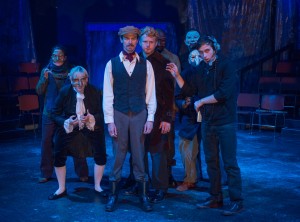 As much as the show is about The House Theatre, it is also surprisingly a departure for them. They have never been a very script-driven company. Their shows are usually driven by their very muscular, comic book-esque theatricality. (Comic book-esque is not meant to be an insult, so if it seems like I’m saying that their style is shallow or trivial, just imagine that I said it was “graphic novel-esque” instead and you’ll be good to go.) But “Season on the Line” is very much a show driven by its dialogue, by its interactions between the characters. It is set in a reality not unlike our own, and there are no rat kings or time machines on hand to heighten the action. Many of the scenes are actually comprised of (gasp) people sitting around and talking with one another. And yet that theatricality is still on hand. It may be employed more sparingly, but all that means is that when it is used its effect is twofold. Act Three contains a scene between Adonna and Starr that is staged thrillingly on a rotating platform. This simple act lends an epic sensation to a moment that is genuinely epic, a battle of wills that will decide the fate of everyone on hand. To paraphrase a line from the show, what this simple act of staging does is “it takes the personal, and makes it universal.”

It’s kind of impossible to write about this show without getting a little meta, a little personal. The show directly engages with the act of writing theatrical criticism that some cynical little part of me thinks is a clever ploy to throw us all off our game. But no, their engagement is genuine. They aren’t taking aim, they are making conversation. The climax of the play comes when Olwin unwittingly stumbles upon Arthur in the lobby after the show and the two men talk. Arthur discourses upon the powers he wields as critic and the responsibilities that come with it, to his readers, of course, but also to the artists. These are the kinds of questions that all critics (or rather, all good critics) struggle with. And I for one am well aware that whatever I have to say about a show is not going to make or break its success, but I do make the conscious choice to write as though that were true.

Do you hold young companies to a different standard then the big ones, knowing that audiences might not do the same? Do you take your personal biases into account, knowing that you might hate, say, “A Light in the Piazza” but if the production is a good one then who are you to take that hatred out on them? If a young company—or an older company in dire straits—goes out on stage and just tanks it, do you rip them apart knowing that they might never put the pieces back together again? Watching these questions bandied about onstage I felt, honestly, kind of uncomfortable. But, you see dear theatrical criticism reader, that is the thing about good art. It asks the questions that you might not want to hear, and it stops just short of offering you pat conclusions.  Like a whaler with a harpoon, it spears you and then it slowly draws you in whether you like it or not. “Season On The Line” might question why the hell people keep making this stuff in the first place, but it never questions why we keep coming back to watch. (Alex Huntsberger)

The House Theatre of Chicago at the Chopin Theatre, 1543 West Division, thehousetheatre.com, Tickets $25-$35. Through October 26.