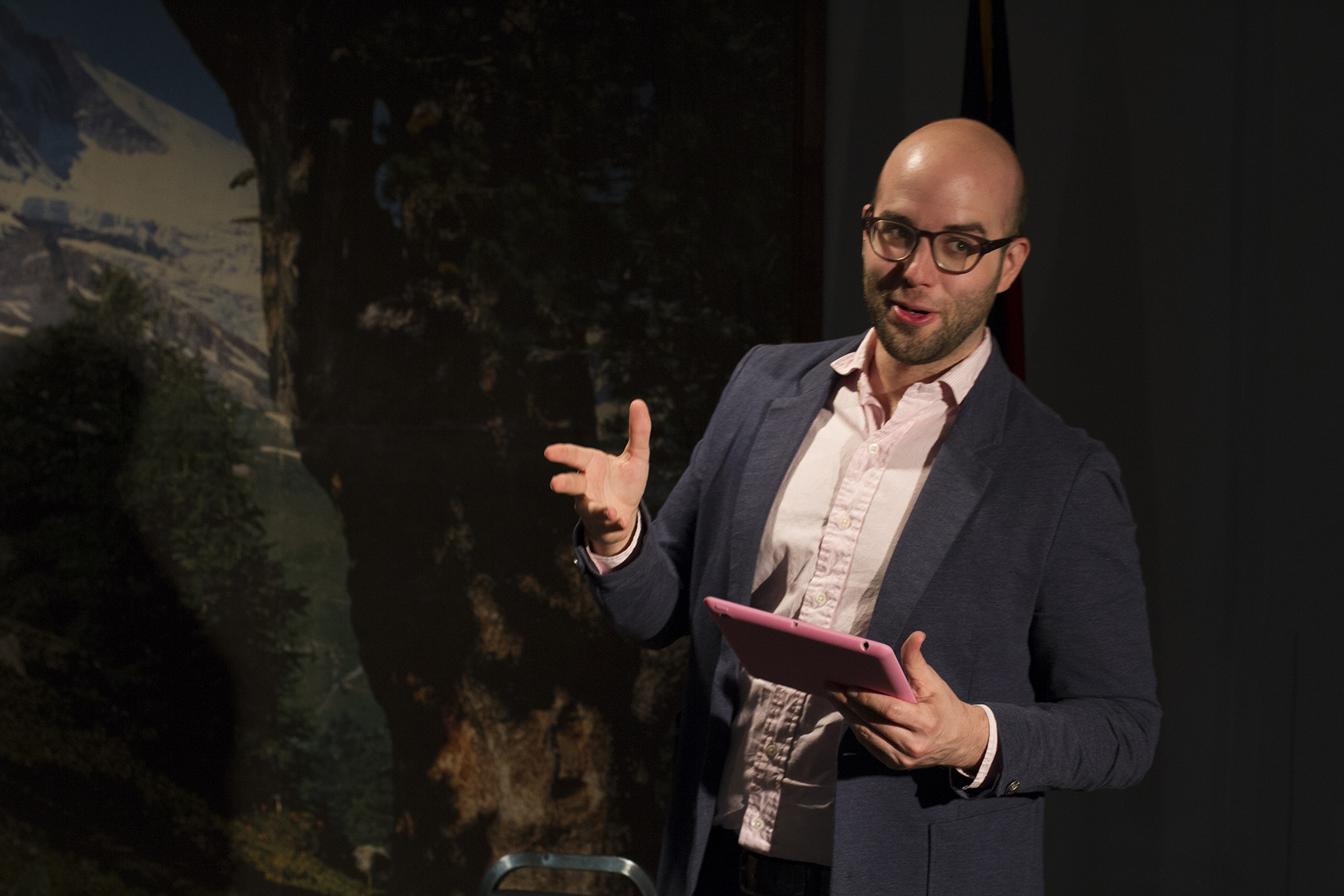 Comedian Shawn Bowers has an intriguing, slightly stomach-churning hobby: he poses as a young, attractive woman (Margie) on dating sites, baiting and then reeling men in for revealing conversation. Shawn has spent years pursuing this game, and periodically presents his research in the form of a new installment in his series. The newest offering contains the qualifier “Procreation.” Bowers explained the reason for this branding in a short section of the extended skit (about seventy minutes without intermission) but, while slimed with the same faintly stinky charm that permeates the entire piece, he lost me entirely on this point. I was suspicious as to why this comedy sketch-cum-cultural anthropological exercise needs not just one “curator,” (Bowers) but two, with Sarah Gitenstein adding her curation-ness. But then I have no idea of just how extensive the content of Bowers’ research might be, or what one does to be qualified to maintain and interpret the scientific findings at hand.

None of these references to sociological significance cast a classroom-esque pall that rocks the rowboat, and Bowers takes the audience on a fishing trip to a well-stocked pond. As statistics prove the growing trend of heterosexuals to seek, find and carnally enjoy one another using the services of a yenta called The Internet (the gays did it first, and I have no doubt there is research available that they still do it better; perhaps Bowers needs to spend some time being a hot boy chasing boys online, but maybe he has, and if he hasn’t he needs to send me a check for this bedazzled idea), Bowers is on to something to revisit, and perhaps turn into an unusual memoir. (Check, please.) With the disarming combination of self-deprecation and the bitchy-bite perfected by Joan Rivers, Bowers shares his sacred Rules of Engagement for his online fishing, including not making the first move, not judging, not inconveniencing the tripe, and not continuing a conversation the first party has ended. But it’s only a matter of time before the fishing-lines start to unravel and break, and this multimedia funfest reaches its greatest ribaldry when he loses self-control and steers from the safe waters of his prescribed righteousness onto interpersonal shoals. (I wonder if this piece would reach a larger, more diverse audience if Bowers let it slip that watersports and scat sex splash their way into the conversation. Perhaps I just did that for him, there’ll be an invoice for that as well, Bowers.)

With the assistance of three appealing actors who read-in as various hooked fishies (Christina Boucher, Patriac Coakley, and Tim de la Motte), Bowers turns the private public. The conclusion drawn is “Just because you can, doesn’t mean you should.” Bowers and crew “can,” and indeed they “should.” (Aaron Hunt)