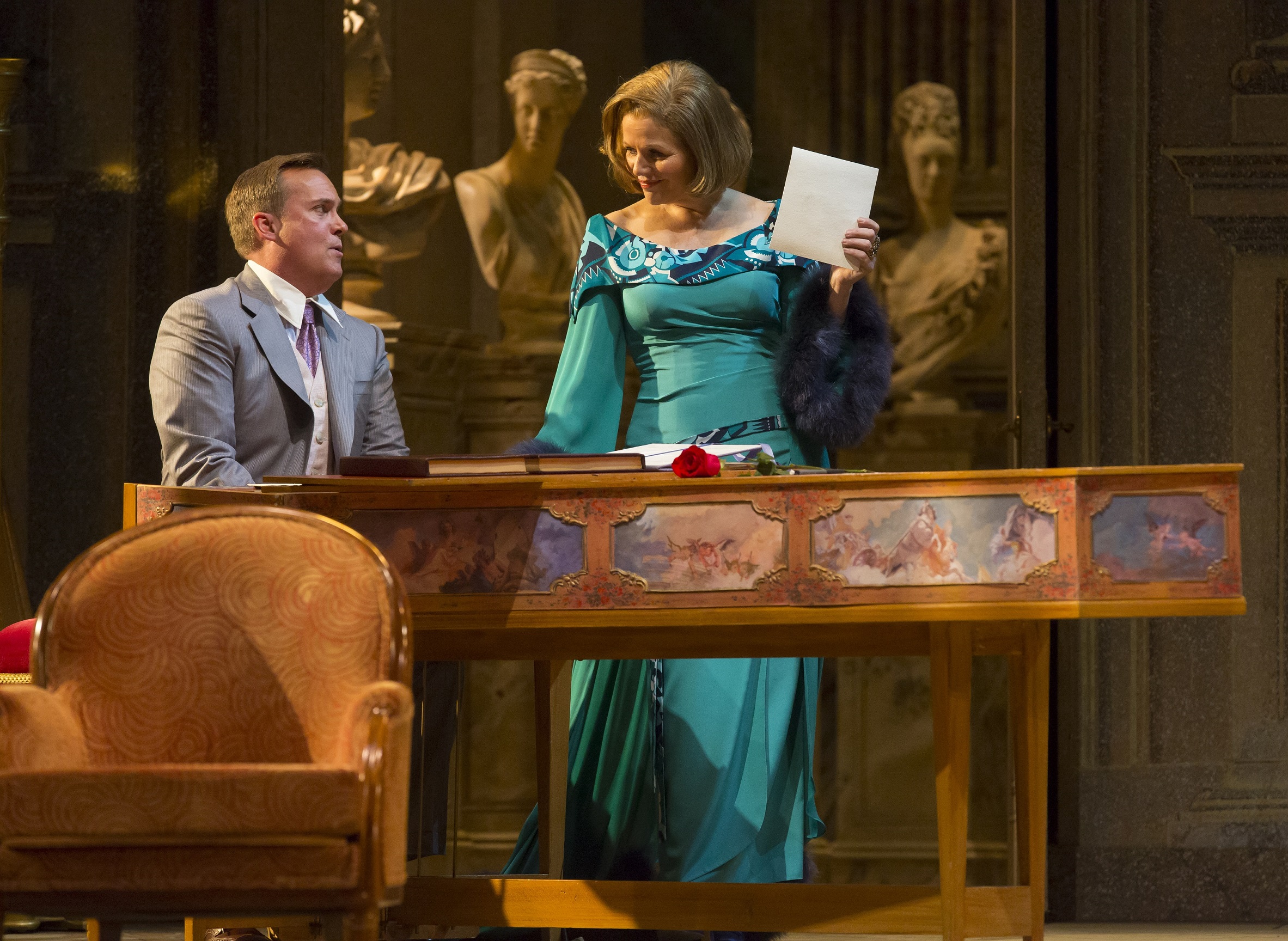 Loaded with the star power of soprano Renée Fleming, propelled by music director and conductor Sir Andrew Davis’ unique understanding of the score, and set in the 1920’s framework of John Cox’s controversial production, Lyric Opera of Chicago’s revisitation of Richard Strauss’ “conversation piece” “Capriccio” must be considered in light of its weight as an event that crosses boundaries and begs alliances. Critically argued both for—for its fresh sense of comedy and perception of character—and against as mocking not merely the subject matter but the composer himself, Cox’s direction (here realized by Peter McClintock) was last seen at Lyric twenty years ago with Sir Andrew himself at the orchestral helm; the final jewel in this outing’s headband is provided by Fleming, known to many non-opera goers as a singer of popular song, jazz and the National Anthem.

No newcomer to the role, or to this production itself, Fleming sounds as fresh of voice as ever, and never provokes her instrument to war against the unforgiving acoustics of the hall. If the fake fur around the sleeves of her first gown left both Fleming and her fellows searching for her hands, and if its turquoise shade clashed biliously with the greens of some set pieces, Fleming looked every inch the girlish, early widowed wisp, moving gracefully about the somewhat confusing set, with its period-appropriate furnishings scattered in front of the drawing-room backdrop of a different century. A natural actor and giving scene partner, Fleming never stinted the text.

But what are we speaking of here? The words? Or is the voice—the music—the subject at hand? The smoke in the middle register that makes Fleming’s lyric soprano immediately recognizable the world over maintains the glowing point of a lit cigarette, and the voice flashes easily through the register changes that Strauss demands, even in recitative. In the famous final aria, Fleming spins the silver threads of lyricism that Strauss made his unique gift to the soprano repertoire. If her portrayal of Countess Madeleine seems narcissistic, Cox must be either lauded or blamed. Fleming’s Greta Garbo-esque posings, and if-you’re-mine-I-don’t-want-you moves point in this direction. Madeleine frequently hugs a framed picture. I expect it is supposed to be her dead husband’s likeness, but I could not help but wonder if it is a picture of herself.

The Countess has two suitors, a tenor (William Burden) who composes, and a baritone (Audun Iversen) who provides the words. Her baritone brother the Count (Bo Skovhus) is infatuated with a mezzo-soprano (Anne Sofie von Otter) who acts in grandiose productions mounted by a bass-buffo impresario (Peter Rose). Also on hand are ballet dancers, Italian opera singers and the servants (led by the perceptive Majordomo of David Govertsen). All the debaters are charming and passionate, and now the “conversation” over whether the music or the words deserve precedence commences. With the exception of an instrumental sextet, and a sonnet-turned-art song (the acrimoniously conceived love-child of the composer and playwright), the first half feels nearly spoken, almost devoid of melody. Yet Davis, his orchestra and the cast pull the colors and intentions out of the score that allow Strauss to weave his web around us, to cocoon us into the world of the play. And if the singers sometimes cannot be heard over the orchestra, this is an oft-heard refrain at Lyric.

But wait, it’s an opera, isn’t it? Lyric’s “Capriccio” further elucidates this ongoing conundrum, making a lush argument for shaking hands across waters, for the marriage of words and music. (Aaron Hunt)