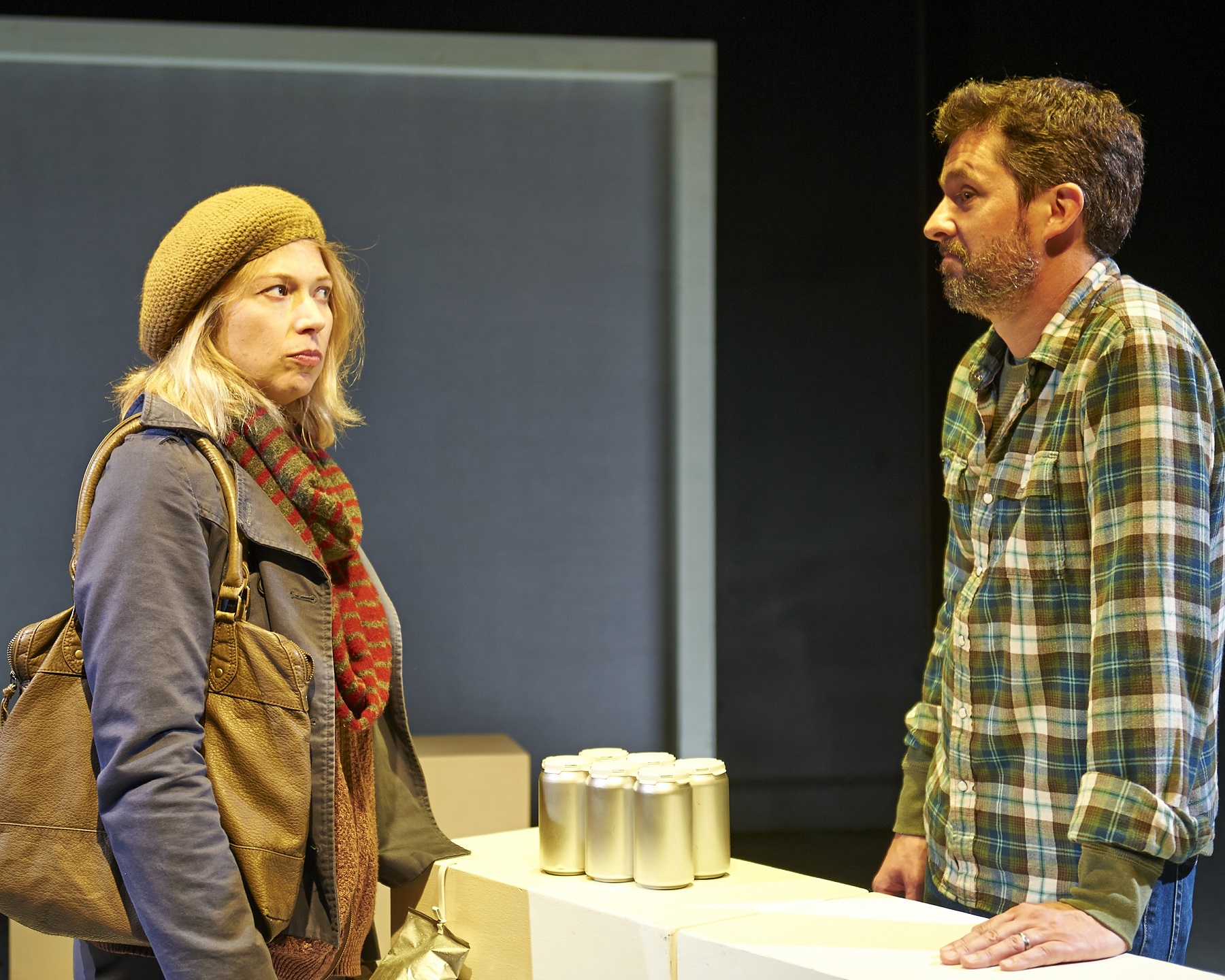 Playwright Hamish Linklater’s first play is being billed by Steep Theatre as “funny.” But there was not a single laugh from the audience the night I saw the show. Alright, there were two abrupt snorts that might have been a reaction to a tripped funny-wire but, in this production, the play is hardly comical. What “The Vandal” is, is a very smart, well-paced discussion of life, death, truth and love, from an existential viewpoint. When a freshman playwright sits down at a table with Sartre, Beckett, and Stoppard, and uses all the right forks and doesn’t slurp the soup, attention must be paid.

It is hardly possible to comment on the plot without giving away its surprising twists and turns, and naming the questions the audience will want to ask themselves on their way home. I’ll go so far as to say that anything might be true or not, someone might love someone or not, and someone might be dead. Or not. And listen for the rapid-fire, almost thrown-away warblings, for that’s when the birds are singing the “real” story.

The feathered friends in question are called simply Woman (Kendra Thulin), Man (Alex Gillmor) and Boy (Jack Miggins). All three actors acquit themselves admirably with difficult material, and plenty of it. The character of Boy talks incessantly, Man extrapolates with ferocity, and Woman, once we wrench off the childproof lid, has a few things on her mind as well. Their combined portraits create a still life of bottled emotion.

But the star of the evening is director Shade Murray, one of the most present players in Chicago theater. Because the actors sustain so consistent a tone throughout the piece, I deduce that it was Murray who didn’t find the play “funny,” and didn’t direct it as such. Instead, what we have here is a terse drama, something heavy of subject and bleeding of life-force. And Murray is perfectly within his purview to proceed; the piece is extremely successful with this focus.

I have seen Beckett’s “Waiting for Godot” played so darkly that I wondered if I might commit hari-kari with a cookie at intermission. Last season I saw it on Broadway and was amazed at how delivery and timing could turn a play on its head, turning tears into guffaws. That is, as long as the production doesn’t devalue the material. The marketing efforts may lead audiences to expect “funny”—and I certainly picked up on that in the writing—and while there’s more than enough to like in this surprisingly serious delivery, I find myself sorry to have missed an opportunity to see the piece played in a Chekhovian way, with broad humor suddenly slicing into hidden sensitivity. (Aaron Hunt)