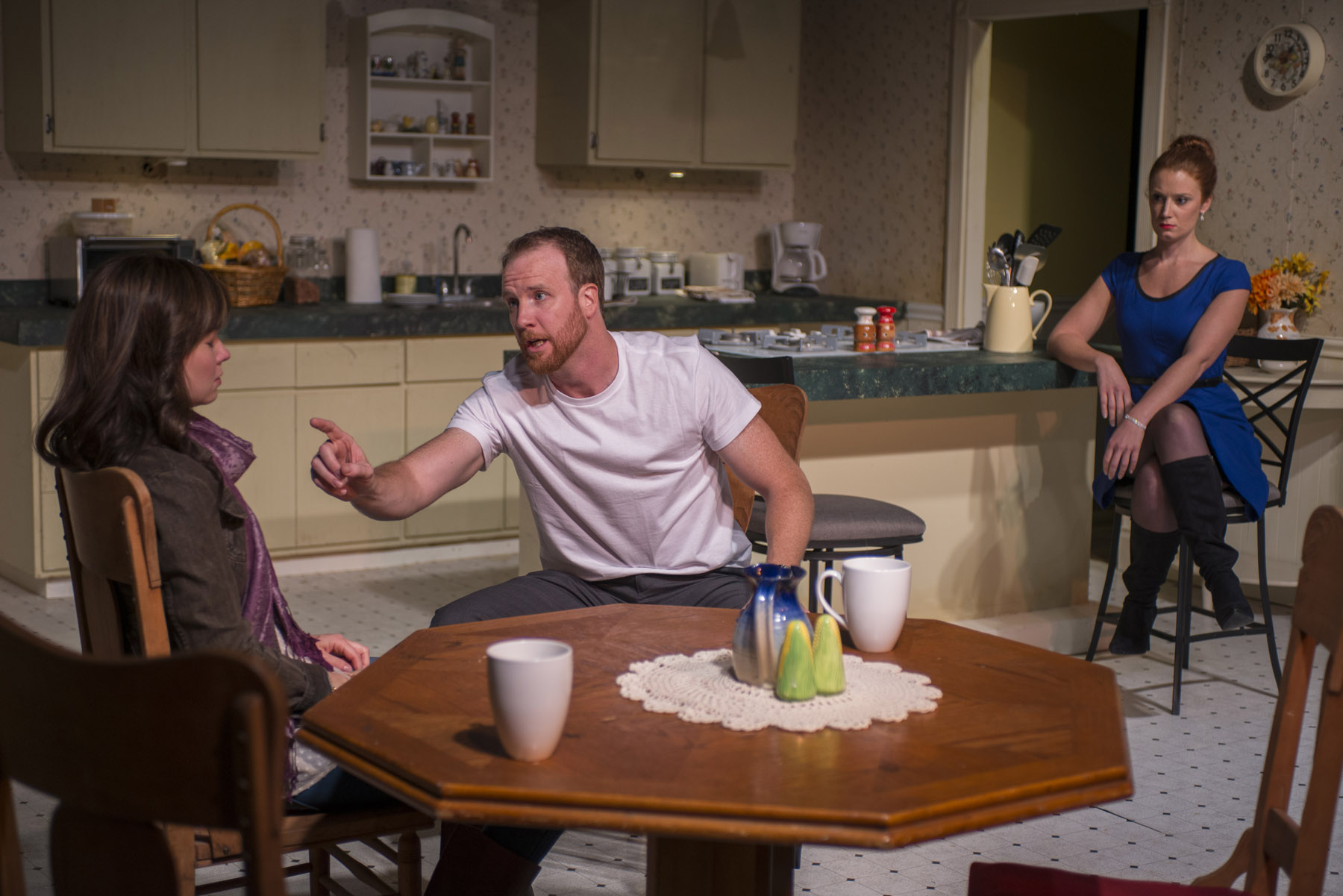 I don’t know what New York City did to Theresa Rebeck to piss her off so mightily, but whatever it was she seems to have really taken it to heart. Of course, that’s not quite true. I do know what New York City did, and it goes by the name of “The 2008 Financial Crisis.” Rebeck’s 2012 play “Dead Accounts,” now receiving its Chicago premiere in the hands of Step Up Productions, is what’s commonly known as an angry screed. And like so many screeds before it the play works itself up into such a lather that it becomes incoherent. It confuses New York City in general with Wall Street in particular, and in doing so conflates geography with destiny (or maybe culpability is a better word) and undermines its own very salient point of view. Wall Street deserves to be excoriated for what it did to this country, but “Dead Accounts” is about as imperfect a messenger as any to be found.

In all honesty, the script isn’t really worthy of the solid, heartfelt production that it receives from Step Up. Director Jason Gerace and his talented cast, led by Steve O’Connell, imbue Rebeck’s words with an energized empathy that makes for a moving, entertaining evening.

The play begins with a trope as old as the Parthenon: the return of the absent son. O’Connell plays a Wall Street banker named Jack who returns home to his parent’s house in Cincinnati under mysterious circumstances. In the play’s opening scene, Jack insists to his sister Lorna (Emily Tate) that he simply came back on a spur of the moment whim. But his incredibly nervous, wired-up demeanor suggest otherwise. (In this scene, O’Connell does unfortunately ratchet up Jack’s jitteriness to Tasmanian Devil-like levels, but he settles in after that.) Jack tries to spend his time helping out his mother (Millie Hurley) while entirely avoiding his sick father, who remains offstage. Jack also reconnects with his old friend Phil (Bradford R. Lund), a fellow accountant who stayed in Cincinnati and is the down-to-earth Midwestern Gallant to Jack’s boorish, East Coast Goofus. But obviously Jack’s secrets don’t stay secret very long.  Once his estranged wife Jenny (Elizabeth Antonucci) shows up in order to drag him back east, everything is out in the open and ready for an Act II filled with reckoning.

O’Connell is an intense actor, as anyone who saw his Coriolanus with the Hypocrites is well aware. That intensity serves him well as Jack, a man who is eating himself alive with self-loathing and guilt and heartbreak. It occasionally can go over the top (like in the opening scene) but for the most part O’Connell provides Gerace’s production with a swaggering, live-wire sun around which the rest of the characters can orbit. Tate provides O’Connell with a natural foil as his slightly bitter but eminently clear-eyed sibling, and both actors have a lived-in, snappish rapport with Hurley. Anyone who’s been raised by a Catholic mother will watch their scenes and nod along knowingly. Meanwhile, Lund walks away with every scene he’s in simply by playing Phil so decent that it ends up turning into deadpan. With everyone shouting and declaring around him, Lund’s simple line deliveries and knowing half smile stand out. The only actor who gets the short end of the stick is Antonucci, and that’s because Jenny is the play’s resident straw man. She is not a character, not even a two-dimensional one. She’s a punching bag stuffed with East Coast stereotypes.

And that is really at the heart of my issue with Rebeck’s script. When it says “New York,” what it really means is “Wall Street.” And yet it so consistently illuminates the contrasts between New York and the Midwest, that it creates a reality in which New York is Wall Street. And in doing so it seems to posit the possibility that what happened on Wall Street in 2008 was somehow unique to New York: that it only could have happened there. It presents a world in which all of Wall Street’s greed and excess and financial chicanery would be solved if they would simply move their offices to Cincinnati, Ohio and staff their banks with locals who would come with a built in set of “Midwestern Values” that would shield them from any and all temptation.

That this play believes that, and that it expects its audience to agree with it, is frankly insulting. Because the fact is that money is money is money is money. Take all the moolah on Wall Street and plop it down in Cincinnati and absolutely nothing changes. All those “Midwestern values” would be winnowed down to just one, and it would be “Midwestern greed.” And it’s not like “Midwestern values” have saved the Midwest either. Notice that the play is set in Cincinnati and not in Cleveland or Youngstown or Gary or St. Louis. If “Midwestern Values” are the cure for all that ails, then why is so much of the Midwest sick and suffering?

When “Dead Accounts” opened on Broadway in late 2012, it closed after barely a month. I can’t imagine New York audiences appreciated it very much. Step Up’s production is running for only a month too, but that’s by design. Given the fine work done by Gerace and the cast, I imagine an open-ended run could last for longer. Not to mention that a Chicago audience is a little more receptive to its message. I just hope that the next time Step Up gets a director and cast so talented, they find a script that does them justice. And its audience too. (Alex Huntsberger)