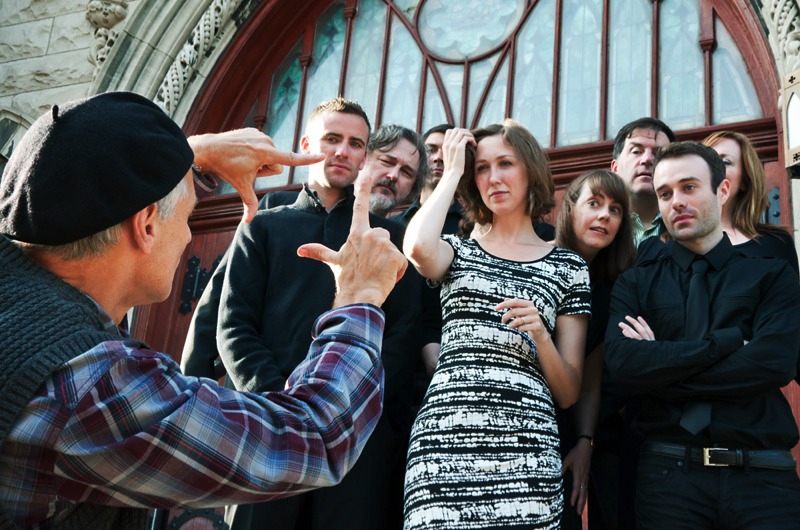 There was a moment in Akvavit Theatre’s US premiere of “The Frozen on the Square (1982)” when the lonely extras that populate the action were staring out into the black nothingness of a frozen Swedish winter and contemplating the infinitesimally tiny corner of said frozen nothingness that makes up the whole of their existence. There was a moment that I understood exactly what it was they were feeling. I wasn’t just there with them. I was them.

In retrospect, I think this was really just an anticipation of what doctors now like to call “Seasonal Affective Disorder.” It’s the kind of existential despair that lives only in the deadest of winters and can only be experienced when one finds itself dead in the middle of one. As the weather grows colder now, and the days shorter, I know that these moments’ expansive, mournful bleakness will soon be upon me. And it’s at times like this that I look at the films of Swedish auteur-of-auteurs Ingmar Bergman and I think “Man…what kind of movies would you have made if you grew up in Jamaica?”

Bergman is also very much on the mind of “The Frozen on the Square (1982),” mostly because it is set during the filming in his hometown of scenes from “Fanny and Alexander.” Bergman himself appears briefly in the play (and is played in turn with an apt inscrutability by Rob Cramer) but he is not its subject. The subject is rather the small, tortured, absurd lives of the town’s residents. They appear as extras in the film, seeking to warm themselves by Bergman’s bright, effervescent flame. But the moment is brief, and they are soon turned back to the sub-zero meagerness of their own insignificant lives.

Needless to say, the play is a comedy.

Written by Swedish playwright Lucas Svensson and adapted by Akvavit’s Chad Eric Bergman, the play is primarily concerned with two couples: a pair of pairs. There is the intense, brooding and totally closeted poet David (Andrew Fortman) and his sweet but simmeringly discontented wife, Susann (Bergen Anderson); and then there is the unsettlingly co-dependent team of Sven (Dan Wilson), a delusional young actor and his mother Nanny (Paulette Hicks), a slightly less delusional veteran extra. Both are unhappy pairings, and both consist of people looking for more out of life than what they are currently getting. The action ping-pongs back and forth between various pairings of characters until finally culminating in what can only be described as a not-very-successful dinner party. That is unless you think that discussion topics like “Well, Hitler did have some good ideas ya know” and “Do you think that mothers should have sex with their sons” are appropriate post-dinner conversation.

While Akvavit’s production often makes hay from the script’s awkward comic rhythms, something still feels like it’s missing. I would often find myself tracing backwards in my head to try and remember what the characters had done or said in previous scenes so as to make sense of their current actions. Director Breahan Pautsch skims along on the play’s surface without asking the cast to dip their oars deeper into the script’s darker subtextual currents. Anderson is mostly spot-on in her role as a brittle and bitter wife and reluctant schoolteacher, but Fortman brings too much gentle charm to his role as David. The way other characters describe him and Fortman’s own performance often seem off. His David often comes across as a rather normal—if quite peevish—man, while the script seems to call for someone more tortured. He is a man with an awful inner struggle who enacts that struggle by picking petty, biting spats with those around him. Likewise, Wilson does quite well with Sven’s utter obliviousness to the absurdities of his own ego, while Hicks never seems to quite piece Nanny together.

Pautsch’s direction also suffers from clunkiness in its staging. The transitions consist of so much shuffling and dead air that the show begins to deflate around them. And there are a lot of transitions. For the most part the play is a series of short, sharp scenes that call for a nimbleness this production isn’t able to deliver. It is only once we arrive at the climactic dinner party scene, well into the play, that the action is given some room to rev itself up.

In the show’s opening moments—following David’s epigraphic reading of a poem for Ezra Pound concerning the not-so-glorious fates of Odysseus’ crewmen—the extras all stand huddled in the cold as Bergman’s assistant director (Ben Schlotfelt) shouts orders at them. The scene is played for laughs: the extras are ordered to take a step back, then a step forward, then a step back, etc. But still one wishes that there had been such a person to whip the rest of Akvavit’s production into shape. (Alex Huntsberger)