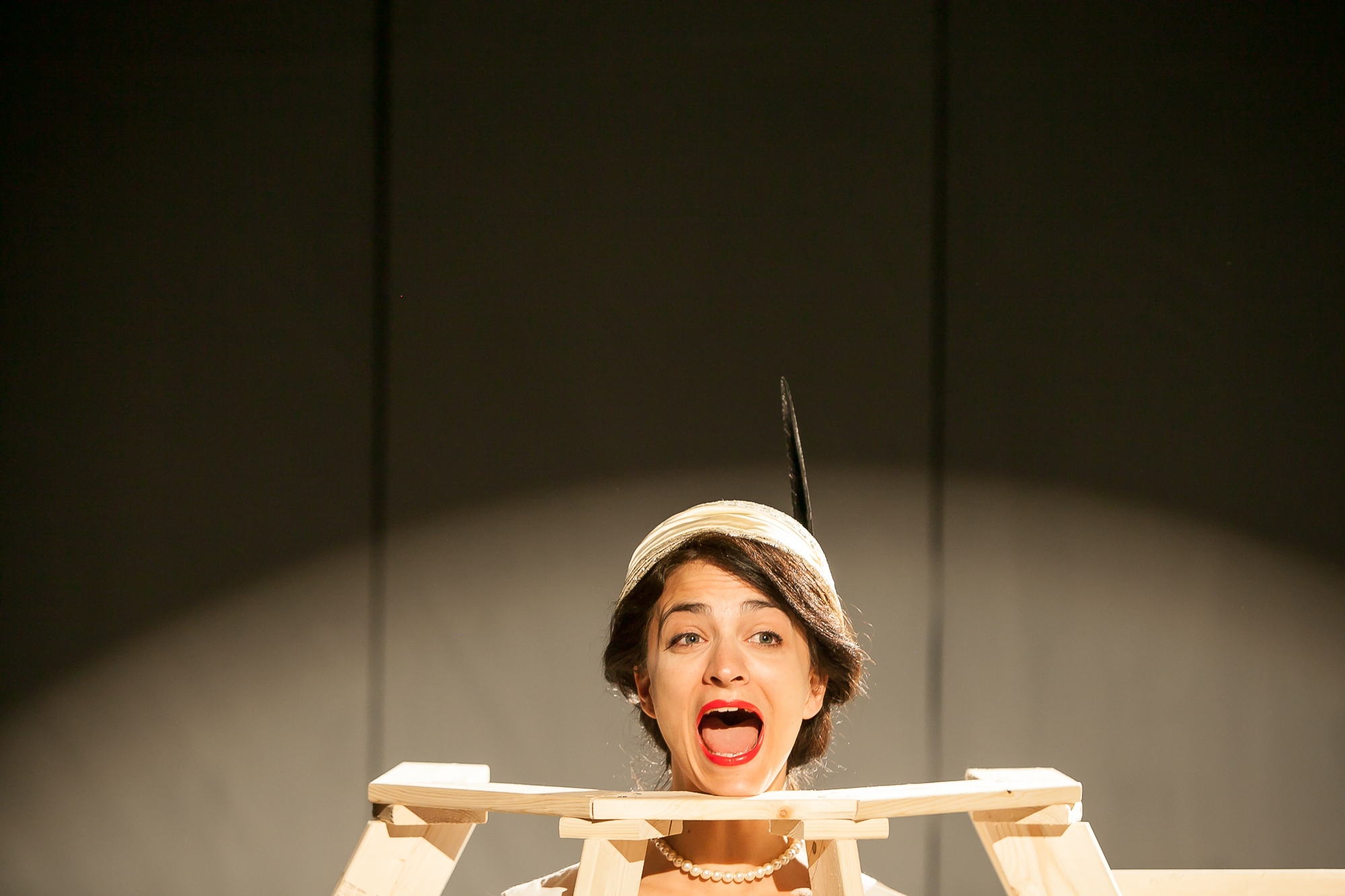 If any one play embodies Theater of the Absurd, it’s Samuel Beckett’s “Happy Days,” in which protagonist Winnie chatters away through Act I while buried above her waist in, well, waste. In Act II she is up to her neck in it. No explanation is proffered. Her situation is what it is, somewhere between open-ended visual metaphor and vaudeville schtick. It is a provocation to the audience and a kind of torture for the exposed and immobile performer. But if we’re all lucky, out of this chaos of word and image something begins to happen between viewer and actor that has little to do with the conventions of story or character, or even theme. It’s something both simpler and deeper: a kind of communion.

“A Beckett play is really a score, it’s music,” says poet-playwright-scholar András Visky, who has come from Romania to direct Theatre Y’s soon-to-open production of this rarely revived 1961 classic. “Nobody goes to a Bach concert and asks, ‘What does it mean?’ Beckett inherited after World War II the fully meaningless language of the Western tradition—a culture that, as he himself saw, doesn’t protect you from murder. So he felt he had to go back to a zero point, beyond the limits of language.”

Visky is no stranger to absurdity, extremity and entrapment. He is an ethnic Hungarian from Romania, son of a Protestant theologian who in the 1950s challenged the legitimacy of an “official” church sponsored by an atheist communist state. And so at the age of two, Visky and family were sent off by the dictatorial Ceaucescu regime to a Romanian gulag, where he spent his childhood.

“In prison camp, you become mature in one day,” he says ruefully. The punishment served the government’s goal of decapitating civil society, thus crushing potential resistance. It meant that his fellow convicts were in many cases Romania’s best and brightest, and their daily company afforded the budding artist and intellectual an education of a high order. 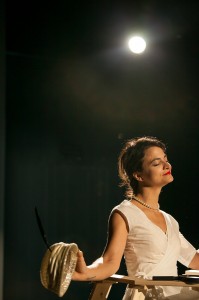 Visky’s youth in the penal colony has served as the basis of his art. In fact, Theatre Y came into being in order to present his one-woman show “Juliet,” according to artistic director Melissa Lorraine, who has played Juliet many times, and will take on the part of Winnie in “Happy Days.”

The collaboration between the two goes back to 2003 when Lorraine, then a student at NIU, was offered a position in Budapest.

“I was doing a Gabriel Garcia Marquez play in Hungarian—which was absurd, an exercise in gibberish,” she says. Stuck in her own linguistic and cultural prison-house, Lorraine came across the script of “Juliet” and, in her words, fell madly in love with it. Wishing to meet the author, she ended up traveling to his home in Transylvania, where he serves as associate artistic director of the Hungarian State Theatre of Cluj. Soon after meeting Lorraine, Visky proposed that she do the first English version of his work. The rest was, if not history, at least a long-term, artistically fruitful partnership that has seen Theatre Y (a name suggested by Visky as a question, i.e., Why theater?) premiere three of his plays: “Juliet,” “I Killed My Mother” and “Porn.”

After seven years of touring, Theatre Y settled down last year in the hipster haven of Logan Square, renting an ancient and conspicuously unrenovated space behind St. Luke’s Lutheran Church. The long-empty sanctuary, with its weighty gloom, seems a suitable place for the tale of Winnie, trapped in her growing mound of what Lorraine describes as “digital garbage,” visited only by her apparently senile, barely present husband Willie (to be played by Lorraine’s real-life husband, Evan Hill). The play’s minimal look will be courtesy of Péter Szabó, another ethnic Hungarian from Romania. A conceptual artist and friend of Visky, Szabó promises to deliver a “contextual, site-specific” Beckett that is “tied to Chicago.”

When first asked by Lorraine to stage “Happy Days,” Visky demurred, saying he was not a director. But the thought of doing Beckett in a haunted-seeming house with Szabó at his side and a husband-and-wife cast proved irresistible.

“If people from another planet would see Beckett, they would understand humanity,” says Visky. “He is more modern than contemporary theater. He doesn’t teach you anything, exactly, but he makes you come up with your own way of seeing. He requires you as his sounding board.”

Visky rejects the common perception of Beckett’s vision as one of bleak despair.

“That’s radically not true,” he says. “To play Beckett without humor is a complete misunderstanding—and if humor is there, there’s hope, connected to playfulness. Winnie’s clown tricks are like something from Buster Keaton, his model. There is a kind of happy ending, but it’s not in the play, it’s in the audience.”

Lorraine describes Beckett’s dramatic effect in more mystical terms: “He removes the light from the room, and then the room appears.” By dispensing with the contingent and the superficial, his dramas reveal the essential, which we experience in our own way, as absurd or profound or, ideally, both. 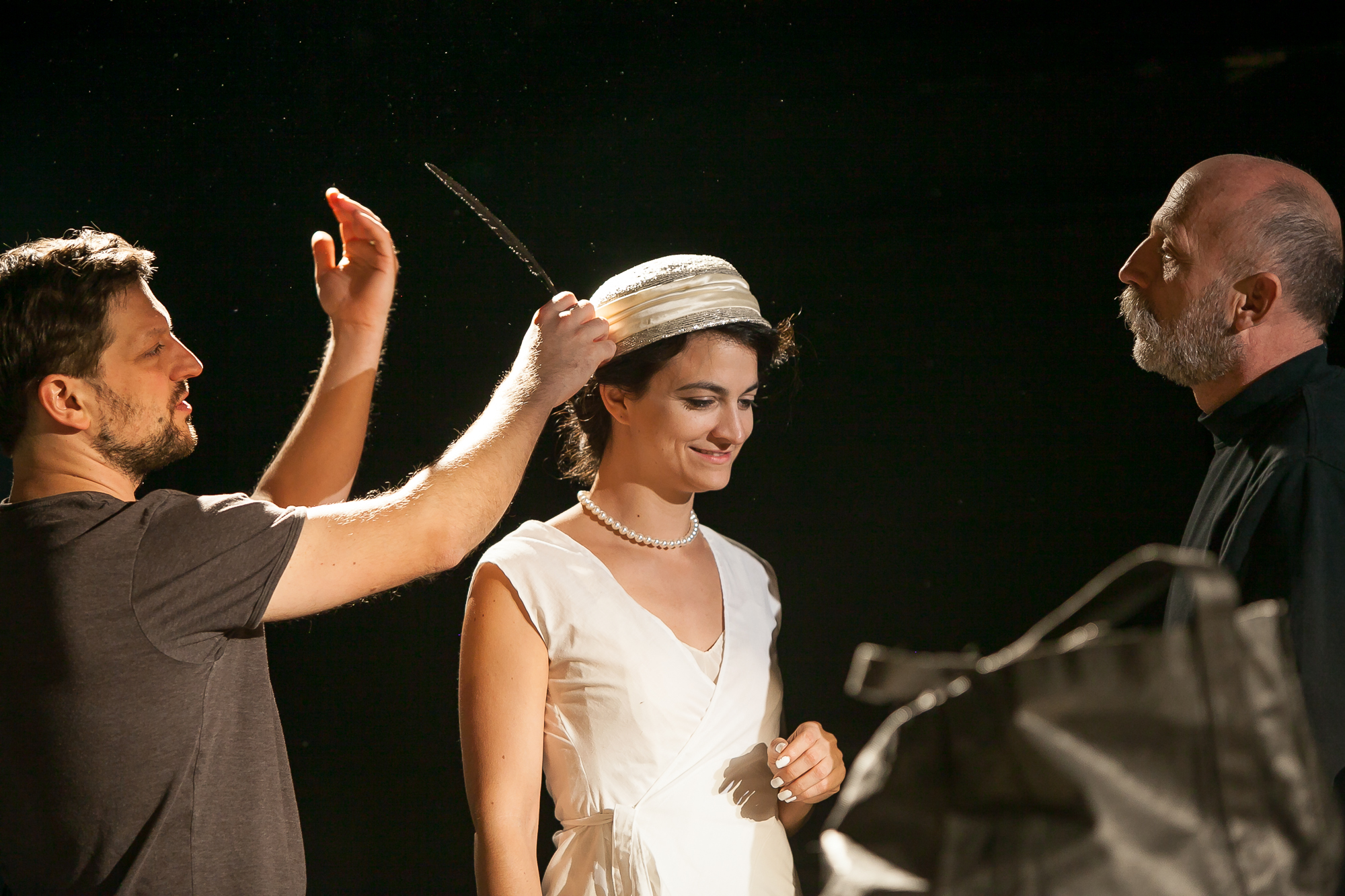 Visky notes that Beckett’s dramaturgy is “looped” and tied to a kind of boredom. It reflects the classic strategy of the avant-garde to use silence and repetition to ruffle the feathers of the audience and to push it away from the usual escapism and toward an uncomfortable inwardness. The relation between bohemian artist and bourgeois audience historically has a sadomasochistic element, which can take the form of passive-aggressive crowd behavior, sullen silence or outright hostility. In a culture of unending sensory stimulation, boredom can turn quickly to panic and anger. Thus the real drama and suspense of a challenging Beckett production occurs in the seats and in the interaction between spectator and performer.

It is unlikely that this goulash-flavored, Internet-set version of the Franco-Irish playwright’s cryptic existential parable will spark a riot in our (usually) well-mannered town. But it’s a good bet that—unlike with more glib and coherent works—something will actually happen once the lights go out and Winnie appears in all her raggedly chipper Everywoman glory.

Asked what he wishes to achieve with his production, Visky replied semi-seriously that he wants his audience to leave “in a meaningful way—I would be happy if they would leave very bored, not kind of bored, but bored in a scandalous way.” In the end, his goal is to create a theater of freedom, self-reflection and intimacy, the things that characterize healthy relationships and a civilized society. The openness and richness of Beckett’s work “is the breathing of the culture,” he says. “You need to offer people a chance to breathe.”