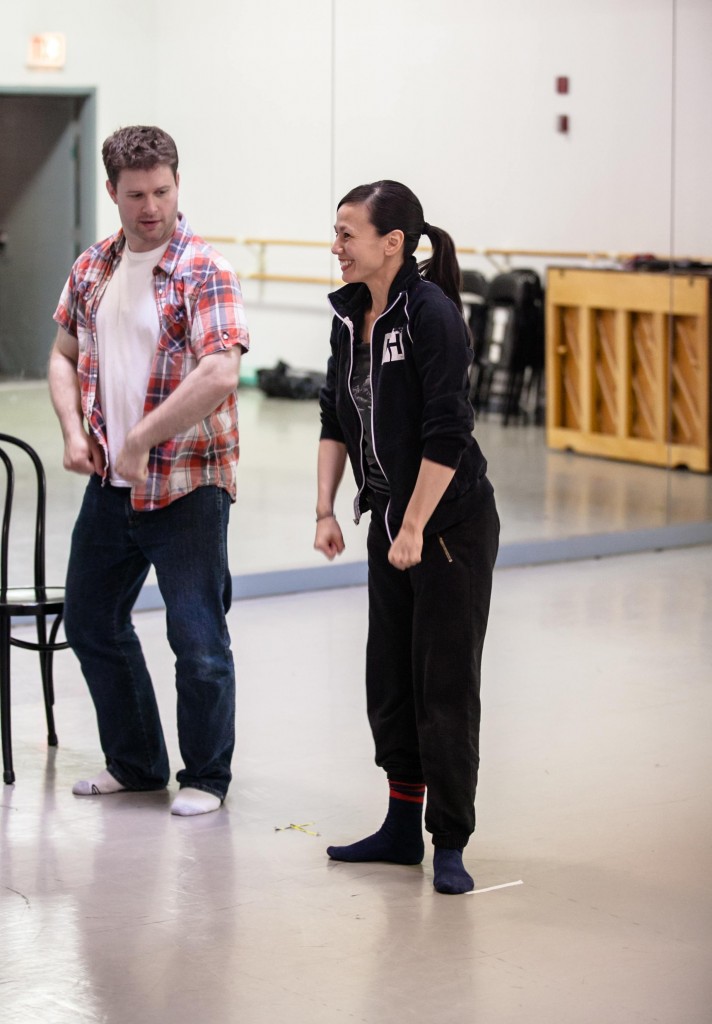 Two tremendously gifted groups of craftspeople working in different mediums have joined their toolboxes and been set loose in one of the biggest workshop playgrounds in the city. A massive amount of talent is in the mix, both in quality and quantity: the entire Hubbard Street Dance Chicago and Hubbard Street 2 companies—twenty-seven dancers combined—plus the four writers, six actors and musical director of The Second City. Simultaneous rehearsals spread across four rooms at Lou Conte Dance Studio, with musicians, actors, directors, choreographers and dancers bouncing from room to room, piecing together their individually developed scenes—about twenty-five scenes in all, according to Hubbard Street artistic director Glenn Edgerton—some driven by text, with dance woven in, some driven by dance in a theatrical context; and the final start-to-finish product is something of a mystery to all, save Second City director Billy Bungeroth, just one week before the production.

Without giving too much away (which is pretty much impossible considering the fragmented rehearsals) the structure of the show loosely follows a Second City mainstage production: two acts with intermission, three separate but interwoven plot lines interspersed with short vignettes. A writer/choreographer team developed each thread, and the score, by Julie Nichols, includes a lot of original music performed live on stage along with pointed, referential excerpts of pop songs. The theme is falling—in love, primarily—and requisite risk-taking to make it happen. In one story line, a budding romance between two men—one a dancer, one a white-collar office worker—leads to verbal, musical and physical explorations of intimacy, vulnerability and abandon. And the methods of exploration seem to range from the understated to the spectacular. When the office worker is invited to his new love interest’s family Thanksgiving dinner, the family matriarch, played by Tawny Newsome, delivers a monologue heightened—and deepened—by movements imposed on her by dancer Alice Klock, who serves as a sort of physical magnifying glass of her inner world. In an office scene, the Hubbard Street/Second City team takes advantage of their massive cast and sleek sets to stage a full scale Busby Berkeley-esque ensemble number on rolling office chairs.

The idea for the collaboration came from The Second City, looking for a way to follow last year’s “The Second City Guide to the Opera,” and Hubbard Street immediately embraced the idea. Time was short to write, rehearse and produce the show—only five weeks—so both companies turned to their archives and repertory for departure material; followers of each company may pick up on a few references. There’s plenty of physical humor of course, but the leaders of both companies are very clear that, unlike The Second City/Lyric collaboration, this is not an outsider’s comedic look at another art form. “The show isn’t really talking ‘about dance,’” says writer Tim Mason, “hardly at all, as much as dance is now one of the languages that the show uses to express itself. There’s dialogue, there’s song, there’s dance, there’s scenery, there are lights, and all of those things are telling a story, together.” That sounds like the definition of a good old-fashioned musical, but considering the balanced nature of the collaboration and the process of the artists involved, this will likely be a different sort of musical—perhaps one suited for our new century. Edgerton said, “From the beginning, I’ve been asked, ‘What’s this going to be?’ And you just can’t define it. You have to come to the premiere.” (Sharon Hoyer)