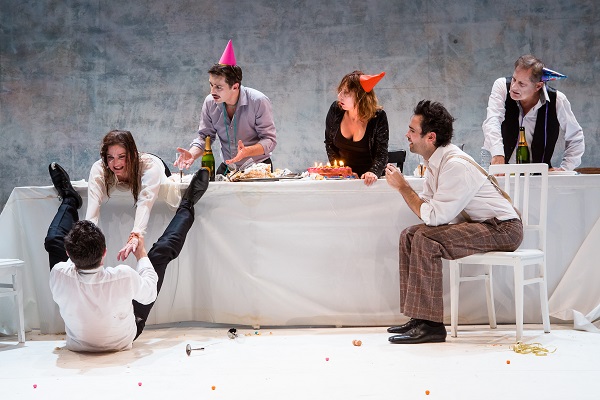 It was a happy coincidence that I happened to catch Theatre de la Ville’s “Ionesco Suite” within a day of seeing Strawdog Theatre’s production of “Fail/Safe.” Both shows traffic in mid-century post-nuclear absurdism, one through skewering the bourgeois with comedic fragmentation and formalist experimentation and one through showing a bunch of B-movie archetypes almost blow up the world. They are about as different as two shows can be while still being about the same basic thing: what it’s like to live in a world that could be blown to smithereens at any second. And whereas “Fail/Safe” portrays the absurdity of this condition (and does a white-knuckle job of it), “Ionesco Suite” goes a step further by embodying it, like the play itself is having a nervous breakdown.

The show, an original creation by Theatre de la Ville’s artistic director Emmanuel Demarcy-Mota, is part collage, part human-centipeding of a number of Eugene Ionesco’s works. Ionesco was a leading light in the “Theatre of the Absurd” movement of the fifties and sixties along with Samuel Beckett, Jean Genet, Friedrich Durrenmatt and many others. Their shows eschewed traditional realism (which is great for Chicago, as we’re up to our eyeballs in the stuff) in favor of heightened stylization, all the better to highlight the absurdities on display and heighten their alienating affect. The show includes scenes from Ionesco’s plays “The Bald Soprano,” “The Lesson” and “Jack, or The Submission” among others. It is not an attempt to cut and paste these excerpts into a single cohesive whole, and it doesn’t play like a greatest-hits album either. Really it’s more like reading a fine book of short stories, something along the lines of George Saunders’ “The Tenth of December.” Each segment presents a different view on the same condition, like a series of shadows all cast from a single light.

The set is stark, in that way that one imagines all experimental European theater sets to be. There is a white floor, a long white table and a mottled white backdrop. The table is moved around over the course of eighty minutes, but the only other thing that really changes (besides the costumes) is the slow accumulation of detritus. Mostly cake. This show is the “Texas Chainsaw Massacre” of cake.

The first scene gives us an entire family barking their (very funny) disappointments at a silent son, who once he begins to talk seems less a failure and more a budding menace. Then we get a pair of couples at a wedding whose often violent disagreements boil down to things like “whether a turtle and a snail are the same creature” or “you’re always hot when I’m cold.” Following that are the mad ramblings of the Fire Chief left bereft of fires and the world’s most ominous arithmetic lesson and other emphatic oddities. These scenes all revel in the banalities of conflict, in our projections of our own fears onto others and about our bone-deep inability to ever learn our lessons. Ionesco’s characters, all of them, are stuck playing the same, sad tune to themselves: a personal aria of anxiety and misery that repeats and repeats and repeats like a Philip Glass song that’s begun to skip. The show doesn’t so much conclude as much as it just summarizes itself and then lets us go.

The show is all in French with English supertitles projected overhead and there is something more guttural about the French enunciation that lets the actors really lay into everything. There are food fights and table mountings and water flingings and knife wieldings and shouting matches by the dozen. There are many moments of stillness, but even those give off a steady electric hum, the action lingering in neutral just waiting for the gear to shift and the pedal to press. The fantastic cast play all manner of fools, some comedic and some tragic. They are even made up with thick white face paint, looking like clowns escaped from a Cirque Du Soleil-themed gulag. And yet they never once seemed worried about looking foolish. They are braying laughers and ugly criers and they show us the parts of ourselves that we never want to look at.

Seeing “Ionesco Suite” right after “Fail/Safe” reminded me that when Stanley Kubrick attempted to make a “Fail/Safe”-type movie from the book “Red Alert,” he ended up finding it all so funny that he instead made “Doctor Strangelove.” This is a show that makes you laugh because the only other alternative would be to make you cry. (Alex Huntsberger)