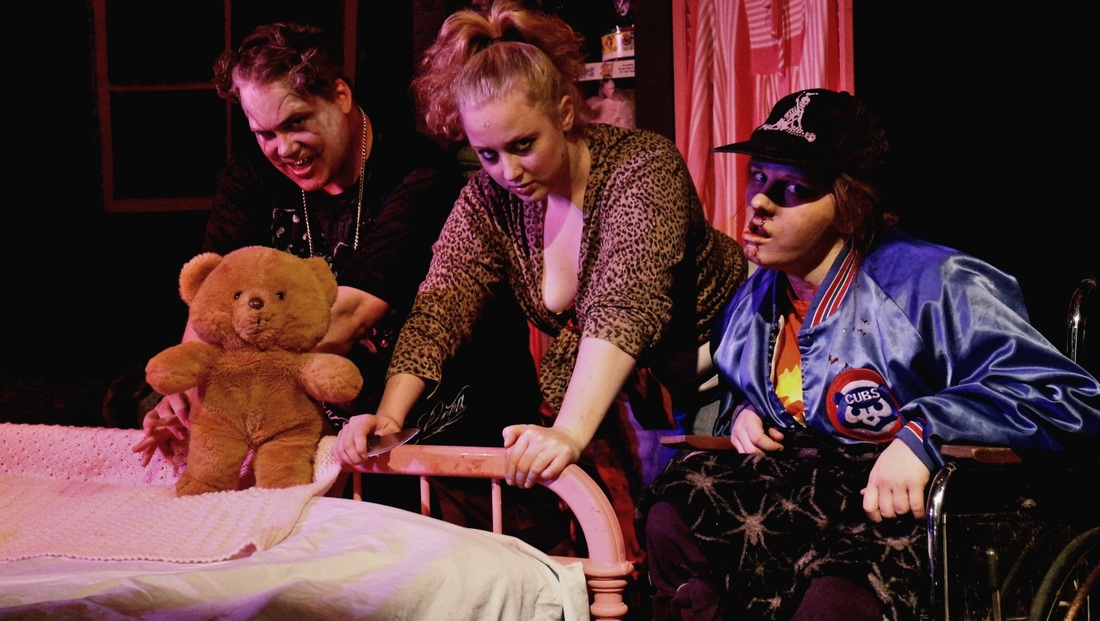 Some of the most unsettling characters in horror films aren’t the demonic phantasms or unkillable slashers, but the just-real-enough weirdos who inhabit the margins of the narrative, halfway between daytime reality and surreal terror. For a tense fifteen minutes, Dream Theatre Company will plop you down in their living room to be the object of sneering scorn in “Audience Annihilated Part 2: Gold Star Sticker.”

The sequel to 2011’s “Audience Annihilated Part One: Women Only Train,” “Gold Star Sticker” places the audience in the role of Princess, the kind of terrified bed-wetter child who always draws the parental short stick in these kinds of stories. The aforementioned weirdos are her caretakers—junkie mother (Nicole Roberts), ukulele-toting Juggalo boyfriend (Jeremy Menekseoglu), and an unexplained drug-pushing amputee (Amanda Lynn Meyer) with a very unsettling emphysema lung-rattle and an incredibly sweet satin Cubs jacket.

As they indulge in the horror movie trinity of beer (Bud Light), drugs (powder-based) and unexplained substances (the titular sticker), their simmering antipathy toward Princess becomes outright ugly. To detail more of the plot would probably do a disservice to a show you really need to go see in person. Audience members are strapped into “bed” in the middle of Anna W. Menekseoglu’s set full of dingy nightmare toys and dark corners. Things go from uncomfortable to foreboding to horrific in an impressively assured fashion considering the time frame.

The quality of the acting really cements the experience. In addition to the white-trash menace convincingly oozing from the lead performances, Madelaine Schmitt and Ellen Cullen do very strong work as a creepy doll and a sentient (or hallucinated) teddy bear, respectively. The creepy childhood toys device is easy to do poorly, but there’s genuine menace and melancholy when Cullen’s bear assures you that you’ll be murdered very soon and that it’s not much happier with the prospect than you are.

Dream Theatre offers two tiers of tickets: the immersive Princess tickets (used for this review), where the audience members are fully immersed in the set, and the observer-only babysitter role. Believe us when we say that hearing Roberts hiss poisonous insults while you’re hidden under a bed sheet is well worth the upgrade. Unless you’re afraid …Princess. (John Carruthers)