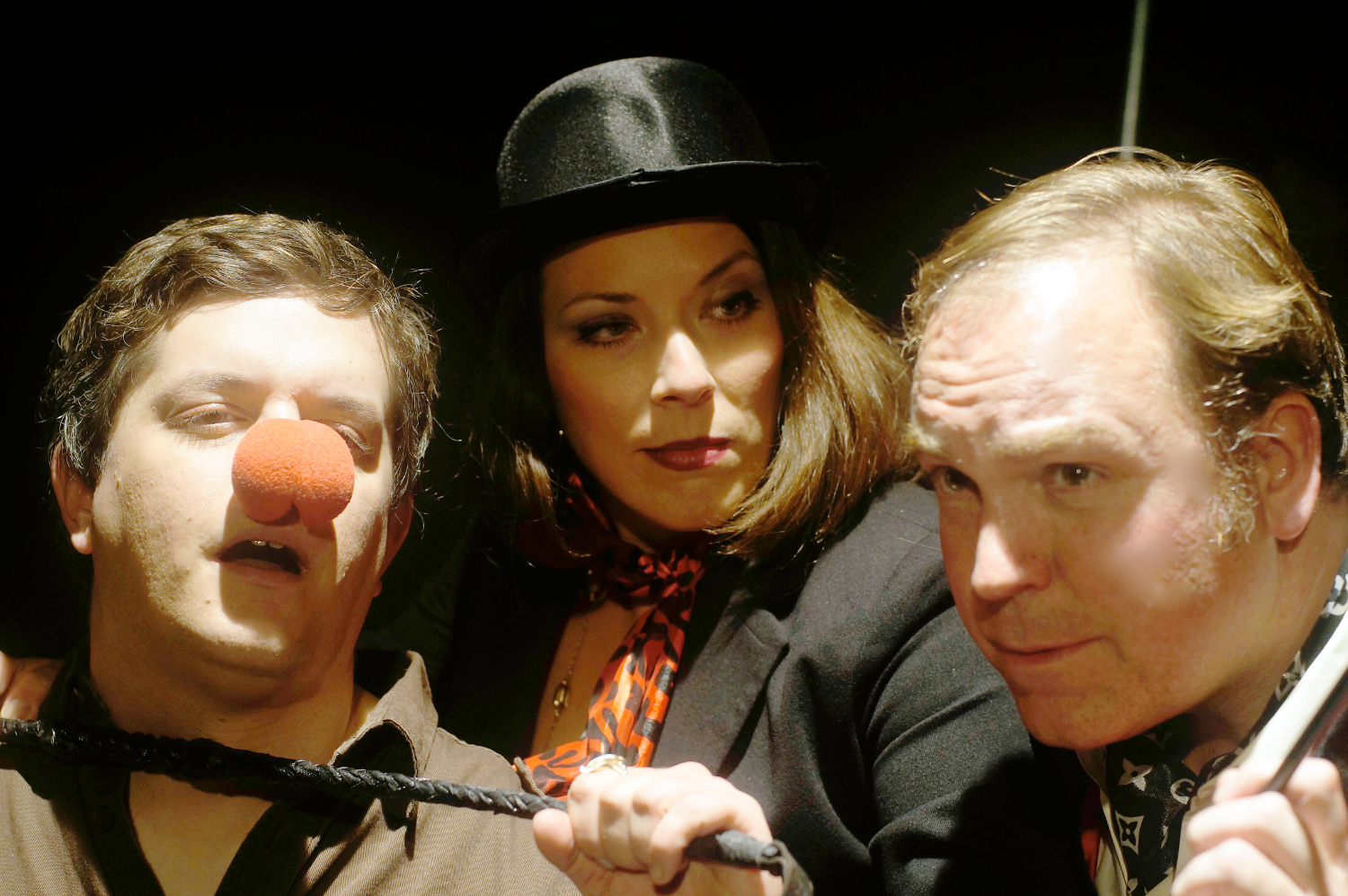 Disclosure, before the sharks circle: I like to be amused. I’m generally not amused by art about art, whether it concerns its own making or whether it ruminates on or examines other art. Sean and Carolyn Benjamin’s “Pseudo-Chum” is highly amusing, and/but it’s also about itself and about other art. Once upon my own youth I had a writing teacher who instructed that the one thing you should not write about is writing. Thanks to this Neo-Futurists production, I’m violating this in the extreme: writing about writing about writing. Is there a solution to this dilemma? As a meta fact there is. I just ain’t gonna mention a single of the play’s cultural references.

That’s only about a seven-percent solution, though. Because I gotta tell ya, the play’s about a playwright who’s written a play and the players who only wanna get the play right when it can do right by them. What’s in it for them? A possible trip to the big time, via the very same waters which imperil the characters they’re playing. And just like the characters they play, they turn on each other. Interspersed with the ongoing rehearsals, we also witness The Playwright (Sean Benjamin) fend off The Interviewer (Carolyn Benjamin) who’s out for his blood from the onset. The Playwright has written a likely insincere show about the plight of sharks being culled by government decree in Australian waters. Whether his empathy for the sharks is wholly feigned, his play is certainly completely ridiculous. Painfully, mawkishly, hilariously clichéd and ham-fisted. The rest of the cast (that is, the cast playing the cast playing the castaways: Amy Berkovec, Alison Connelly, Beth Kander and Aaron Lawson) wring every drop of salty humor out of both scenarios, while connecting the dots between their conniving actors and callow shark hunters/insanely dysfunctional family they portray. Meanwhile, the invasive, eerily knowing interview continues to intensify, with The Interviewer seemingly intent on exposing and breaking The Playwright, while constantly revealing her own maniacal propensity to completely unravel. Carolyn Benjamin nearly steals the show with the varied and sudden pathologies she displays. It’s one hell of an interview, as suggested by the color they’re both wearing.

The Benjamins have crafted smart dialogue that garners much well-deserved laughter. The arrogance and pretension of their own characters often reaches delightful banality, and the decrepit souls in the cast are more inexcusably, laughably selfish than the adrift family they represent. They can’t blame their behavior on being stranded at sea. They’re merely stuck in a bad play by a writer they recognize as a hack but repeatedly flatter for their own benefit. Impressively, during a couple of the most melodramatic moments of the show-within-a-show, this production veers into some actually dark waters. There are earlier hints that this could happen, but then the sheer daftness of the play-within-a-play asserts itself and we’re laughing again. Then, perhaps twice, the cast navigates the wreck they’re on off to someplace serious.

Metaphors and tangents abound, perhaps sometimes excessively. The wordplay, however, is nearly always on. The central conceit offered by The Playwright is that we’re each of us sometimes chum and sometimes shark. Yet the assembled characters most often seem as heartless as sharks but really no brighter than minnows, engaged in a funny feeding frenzy on bloody awful human nature. (Raymond Rehayem)