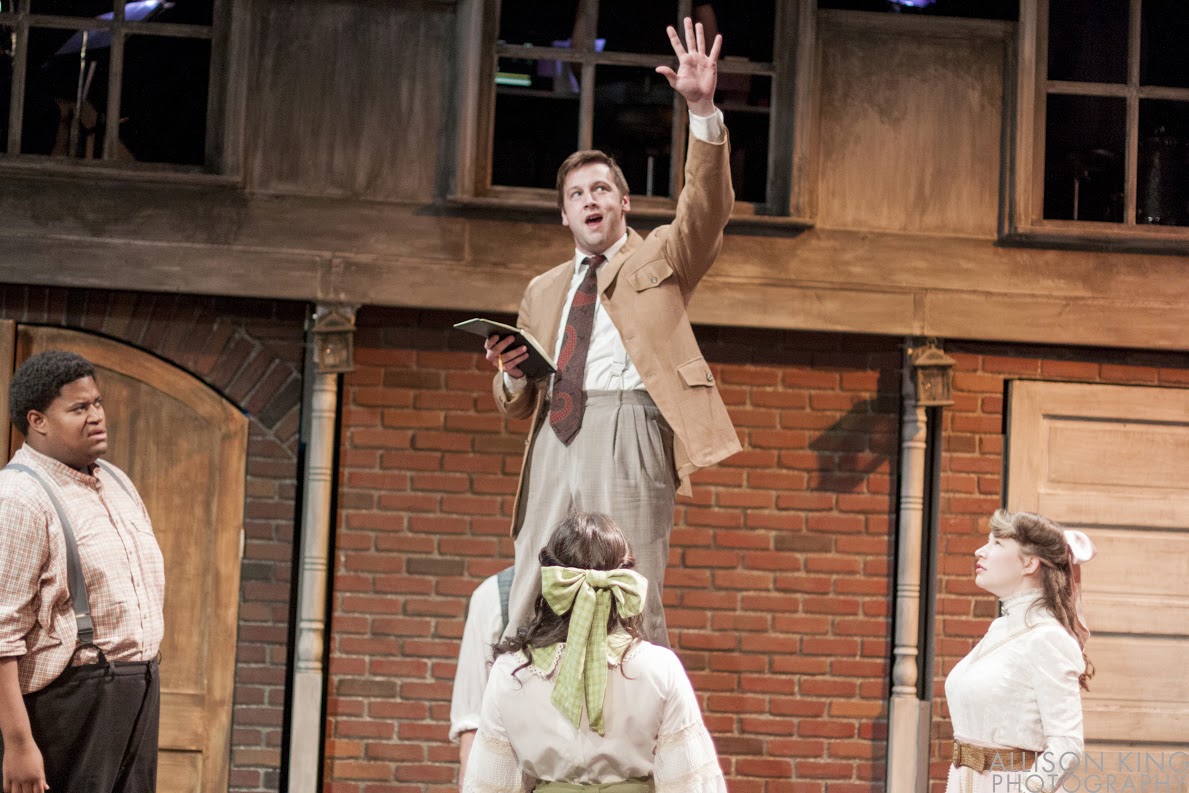 Director Linda Fortunato and the cast of BoHo Theatre’s production of “Parade” know that the game is to tell a story. The trial of Leo Frank, an inveterate miscarriage of justice that caused a Jewish man living in Georgia to be tried, convicted and executed for the murder of a thirteen-year-old girl, the entire ghastly situation coated in lies and bribes and greed and the ready depersonalization of anyone considered as “other,” is a story indeed, a historical horror that should shake us into the realization that we watch this same sin committed again and again, while so few move a finger in protest. This cast-congregation preach the story like the revival meeting it is.

Patrick Ham’s simple, yet metaphorical set is just right, and Brian Hoehne’s lighting design is subtle and meticulous. All other members of the production staff provide solid work. But it is Fortunato’s dancer’s sensibility that keeps the action and the focus graceful and elegant in even the most jagged emotional moments, with the constant entrances and exits (there is an art to the planning of the coming and going of actors) beautifully designed and executed, combined with a first-rate musical preparation (the program lists David Nathaniel Pollak as music consultant).

There is not a single weak performance in this production. Jim Deselm’s (Leo Frank) leading-man looks and stature are completely hidden as he offers a portrait of an intensely shy introvert, a gentle, shuffling, eyes-lowered gentleman of his time and situation. Sarah Bockel (Lucille Frank) has the gift of a showy role, and she takes no prisoners. As a Southern Jewish wife, initially making the socially appropriate response not to involve herself in something as muddying as her husband’s trial, she blazes her way to a newfound strength and purpose. The leading players are heartbreaking as they find each other anew from opposite sides of jail bars.

I could say something wonderful about every cast member. Christa Buck (doubling as Mrs. Phagan and Sally Slaton), disappears completely into two extremely different characters. Peyton Tinder, as the victim of the crime, plays a mixture of fragility and strength that are mesmerizing. Rus Rainear’s extended vocal solo at the top of the show sets a chilling tone that insists on restitution.

Yet what I carried away with me, in addition to a reorientation to the cruelties of men, is that not a single singer wore a microphone, yet I could hear everything. When someone had a step-out, a solo that needed to carry over the group, I heard every word and note because everyone was really singing. Real singing. In spaces of comparable size I am seeing more and more the confusing use of amplification. Now the reason to use such a tool, if it must be used to level the vocal playing field, is to assist the voice that is already there. Full-out singing from a trained and talented voice, living in the body of a person who is in touch with the state of their character to the point where emotions bring color and vibration to the voice, is the essence of the lyric theater. No one here was whispering and hoping the sound technician would create a silk purse. To hold back vocally is to disconnect emotionally.