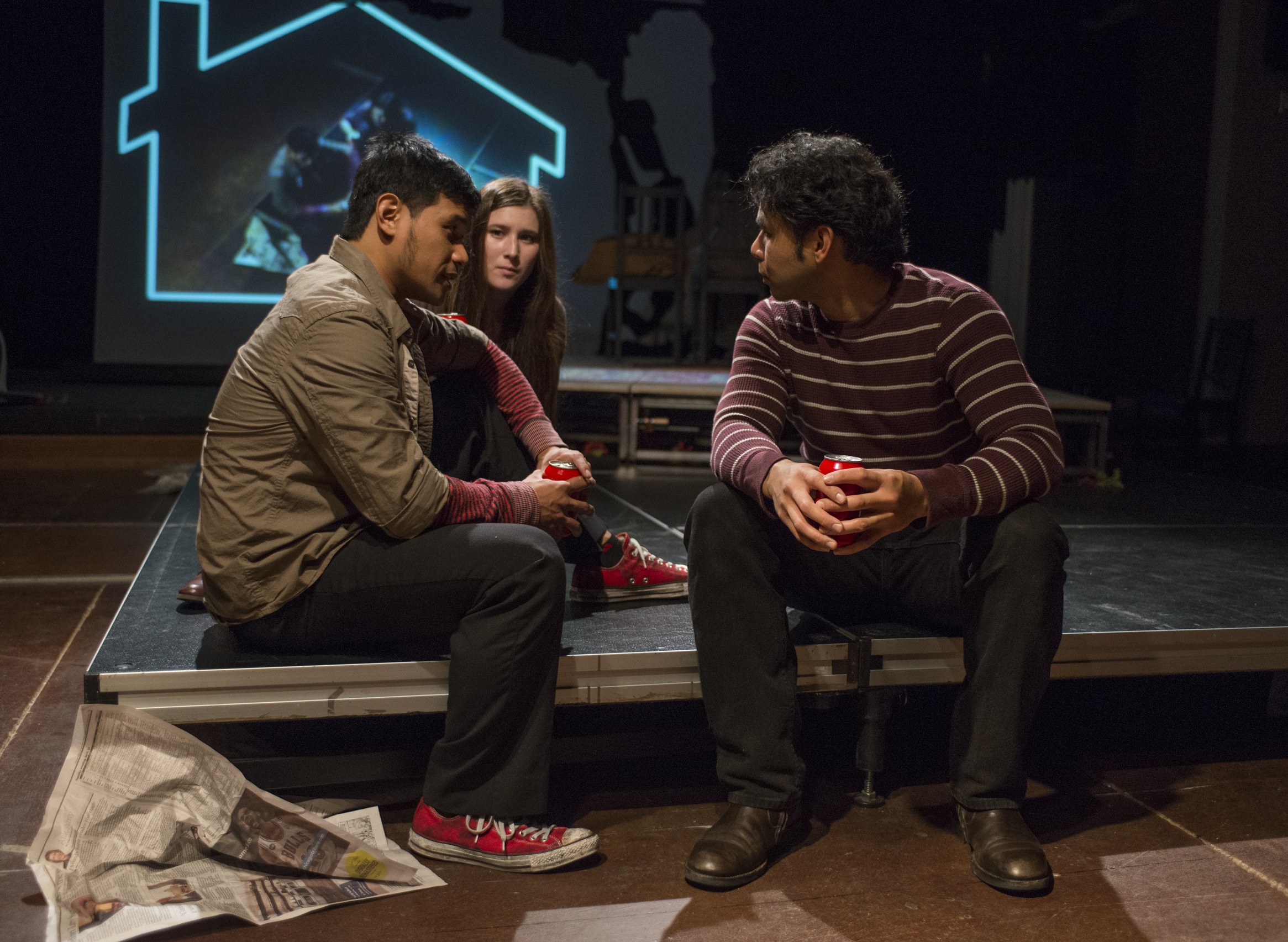 I am loathe to call any art masturbatory. What art isn’t, really? So in a wholly unforgivable act of self-satisfaction, I hereby deem Christopher Chen’s script for “The Hundred Flowers Project” to be Maosturbatory. No, scratch that as cheap and unnecessary. Let me start again. Let this be a review with no past. You do know, comrades, this is all subjective? This act of reviewing? In one seat I slightly suffer; across the aisle another chap laughs knowingly. His smug chortle informs my casual displeasure. I am not writing about this show, I am writing about writing about this show. Scratch that, let me start again. Let this be a review which is forever beginning.

Scratch all this. I was trying to annoy you in a very self-referential way, to communicate my take on this play. Maybe I’ve gone and done it, maybe I haven’t got it in me. Where Chen’s play aims to succeed is exactly in that space where I’m most annoyed: it’s a show that baldly correlates the cultish act of theater-making with the cultish murderous fiction Mao Tse Tung built around himself at the cost of countless lives under the banners of truth, progress, the people and the assorted favorite lies of megalomaniacs. At the show’s start, what appears to await us is a play about the making of a play comparing the zeitgeist of Maoist China with the zeitgeist of social media in our contemporary West. Such a show could be ghastly and trite, or it could draw the likely predictable parallels in some fascinating fashion. Alas, such a show never really materializes.

Instead we are provided a crafty, circular interplay of “play” and “staging of play”—wherein the director of the show becomes increasingly dictatorial and the participants become increasingly divorced from any solid understanding of the line between reality and fiction, between their own will and the will of their leader—all syncing with the history lesson the play within the play provides. Certain signifiers of our social media present are present—tablets, video calling,  etc.—but could easily be replaced with previous technologies—notebooks, cameras, landlines and so forth—without altering much of substance. Hence, rather than exposing anything unique about contemporary times, what unfolds connects the structures of two different sorts of leadership (political, or artistic), their manipulated inner circles, and the impact on the masses (society as a whole, or the audience). Parallels between group dynamics and intimate relationships are also drawn, with the play’s central couple providing the narrative flow through the show’s heart.

Named after Mao’s deceptive invitation for input from the people, “Flowers” focuses on the risks of speaking one’s mind in a world where your own mind may be perplexingly subsumed by groupthink. A journalist/wife character is damned for speaking out on behalf of an allegiance to old-school narrative over supposedly more radical theatrical approaches, just as entire groups are doomed in a nation of alleged perpetual revolution because of perceived anti-revolutionary stances.

The interweaving of show and show-within-show and life-as-a-show and every other spin here is executed clearly. The reliance on multimedia through frequent use of video projection, jarring lighting and sound cues, and quick and substantial set changes must pose notable challenges, but to the credit of director Joanie Schultz and crew, you wouldn’t know it from this adept production. The performances are fine, with Melissa Canciller and Karmann Bajuyo excelling at the center of the revolving narrative. But there’s just something self-congratulatory and more importantly unconvincing about the general conceit of the script. It’s unfair to dismiss any art because you’d prefer it were something else. But here I do wish we’re given what the show seemingly purports to be: an examination of today’s social-media-focused zeitgeist. Nods are made to our devotion to instant communication and the distracting appeal of “permanent” digital archiving and other current proclivities. Seeking (and sometimes managing) to illuminate a massive, foreign system of oppression through the lens of a familiar art-making process, primarily Chen’s script dramatizes the maddening process of collaborative theater, with a veneer of historical context provided by the bloody Maoist past of still-Communist China.  The script addresses the disparity between the gravity of Mao’s China and the relative insignificance of an off-the-rails stage play by taking the stakes global in the second act. This does help greatly, but still I wasn’t buying the analogy. The writing feels clever enough to be pleased with its maneuvers, and smart enough to entertain, but it would need to be truly brilliant to achieve Chen’s lofty goals. (Raymond Rehayem)