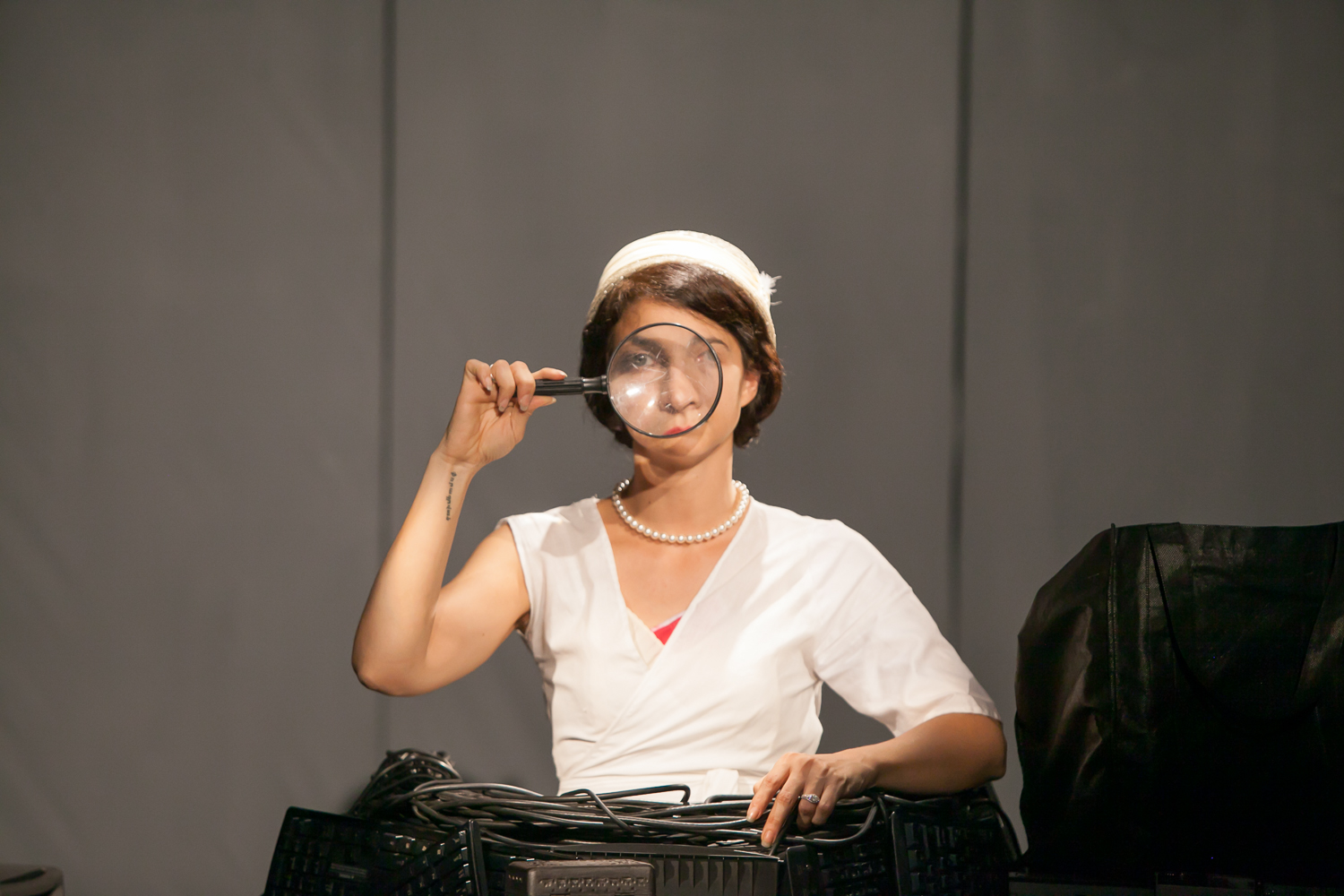 Director András Visky, in collaboration with designer Péter Szabó, roots this Samuel Beckett adaptation in our time and space through the visceral force of sound, design and Theatre Y’s unique surroundings at the sanctuary of St. Luke’s Lutheran Church in Logan Square. The universality of Beckett’s story remains intact as Winnie (Melissa Lorraine), a woman buried up to her waist in act one, and neck in act two, chats to her husband, the seldom-seen but ever-present Willie (Evan Hill) as she goes about her tightly narrated daily routine.

Seeing the mound that buries Winnie interpreted as digital garbage, instead of as earth, provokes the audience into questioning how deep we truly are in our own digital lives and whether they are a part of us, or rather, if we are a part of them. Those familiar with “Happy Days” may notice specific liberties that both the director and the set designer have taken in order to adapt to both the theater location and the theater itself as well as this modern premise.

There is a universality to “Happy Days” that transcends time and space; the audience is not just invited to witness a couple’s life and relationship conclusion, but compelled to think about their own life in parallel. The fact that the pair is played by a real-life married couple breathes real life into this adaptation, making it feel that much more intimate (at least to this real-life married couple of reviewers). The all-engulfing digital mound on stage is never addressed; however, it is cleverly intertwined throughout the two acts and is brought to blinking, flashing life in key moments of despair, making it obvious that while we will always have the quintessential “big problem” of Mother Earth calling us back, we now have an extra pile to deal with. The set is raw, urban and intimate, all qualities of Chicago at one moment or another.

Winnie’s happy days are slowly defined by the slightest of interactions when Willie responds from his ponderous state. These happy moments ignite brilliantly portrayed reactions from Lorraine: ecstatic happiness coupled with recognizable sadness that foreshadows the inevitability of this story. However, “Happy Days” ultimately remains a story of eternal love. Death interrupts but also re-unites. Visky’s vision of how this couple lives to be together in eternity will dig up hope from the overwhelming mound of digital and emotional noise we experience in our modern lives.

Like the play itself, this experience is what you make of it. Eloquent nightly talkbacks led by Lorraine shed further light on both the script and the performance. (Michelle Di Benedetto and Dragos Visan)