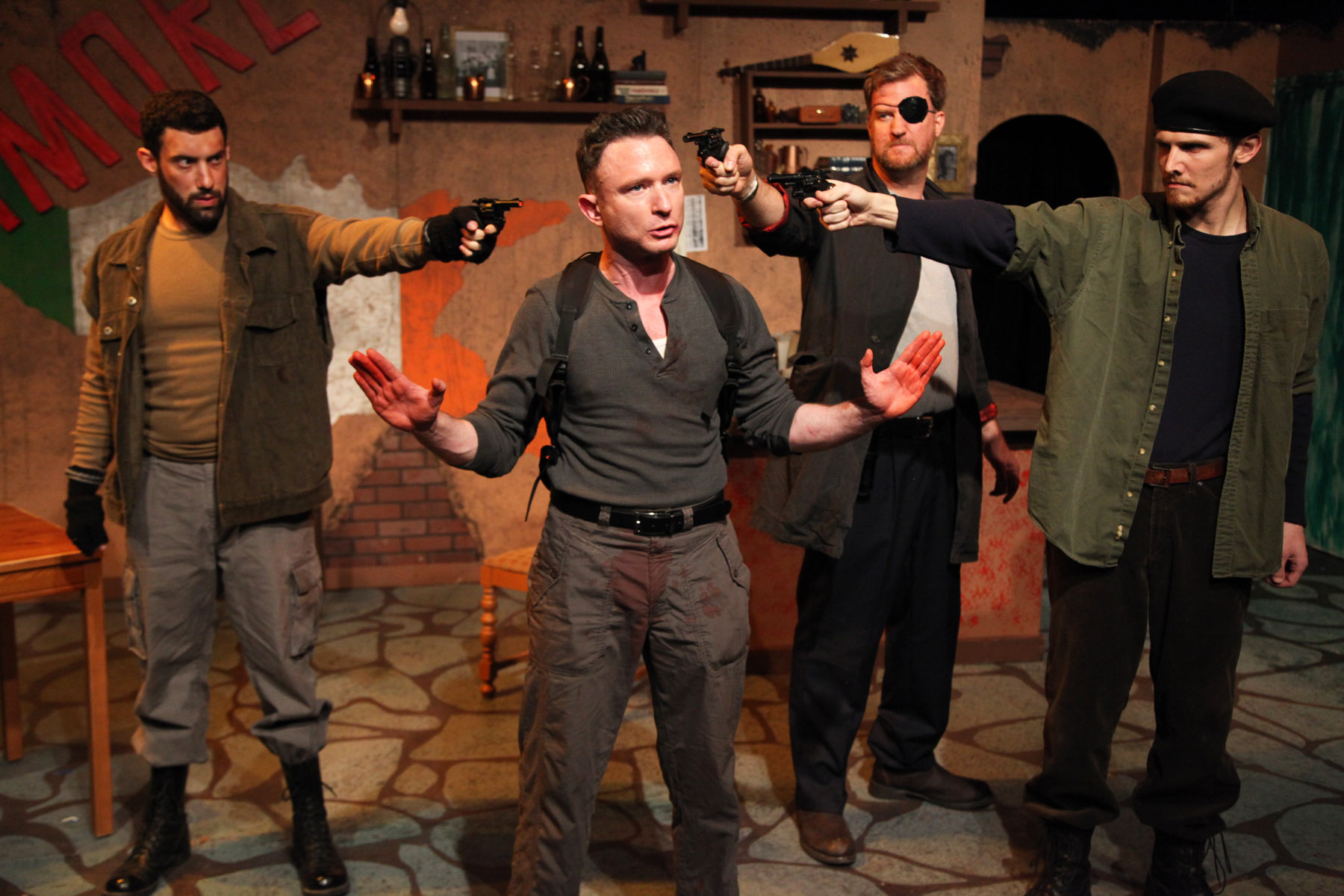 The indiscriminate momentum of violence drives the action and the banality of its coarse adherents provides the comedy in “The Lieutenant of Inishmore.” The humor in Martin McDonagh’s play is as black as the cat that propels lead character Padraic back to his hometown, where he’s feared and loathed by all save young lass Mairead, smitten with Padraic’s self-appointed rise in the ranks and giddy with her own revolutionary aspirations.

The cat’s named Wee Thomas but might more informatively be named MacGuffin. That’s an Irish name right? Scottish? Sorry, I dunno. Point being, the cat explains Padrea’s bloodlust no more than that cinematic sled justifies Charlie Kane’s moral failings. Padraic is irredeemably violent. Concern for his childhood pet is just one of any number of triggers that’ll prompt him to pull out your toenails, rip out the nipple of your own forced choosing, or blow out your brains.

Unlike Kane—unlike most protagonists really—Padraic is an utterly worthless human being. He’s merely the worst of the lot of the play’s characters, who by their own violence (his former cohorts-turned-betrayers; his new sweetheart Mairead), cowardice (fey Davey, framed for the feline’s passing), or resigned complicity (Padraic’s dad Donny) will have you wishing for a malfunctioning firebomb to wipe out all these cretins.

The British are the unseen occupiers here from which all claim to seek independence. But their revolutionary posturing and bloodletting amounts to nothing more than destructive murderous infighting, negative commentary on the state of Irish liberation movements at the time of the play’s writing, a state McDonagh presents as perpetual and inescapable. Padraic—expelled from the IRA for being “too crazy”—is a member of splinter group INLA. He now finds that group too timid for his merciless tactics and fancies himself the leader of his own cutthroat offshoot. Once young Mairead proves she’s not just a boyish girl anymore, and that her sharpshooting skills can be used for more political purposes than the misguided blinding of bovines for which she is known, Padraic elevates her from her own delusions to the second-in-command of his insane dream. In a hilariously mismatched scene of threatened menace and mundane courting, he also proposes to her.

The humor isn’t just black; it’s red. Blood-red. While none of the gore is realistic, it sure is plentiful. Blood! Limbs! Bullet wounds! We don’t just see the acts of violence, but increasingly we see the aftermath. Sure you’ve witnessed murder on many a stage, but how often are you presented the disposal of corpses, piece by bloody piece? It adds an impact to the humor, forcing the viewer to consider the consequences of what’s amusing us. Sort of like the camera lingering awkwardly after a pratfall in a Jerry Lewis film, but much more extreme. Another film reference? I must think this would make a big-screen knee-slapper. The easily startled and those with sensitive hearing should also be advised of frequent and loud gunfire.

Not produced until years after it was written due to its subject matter, the play is surely a lot easier and safer to laugh with now from our temporal and physical distance. Such a dark satire on horrid contemporary circumstances closer to home would likely present a different challenge to audiences. This distinction raises questions about the value of the play that I can’t answer from a viewing on the far North Side of Chicago in 2014. If I’d seen it when it was written (if it had even been produced then) and had been affected by the conflict it parodies, my assessment might differ. My best guess is I’d have found it just as funny, but markedly more revolting. And even now, here, it’s pretty fecking revolting. What it depicts is so appalling it would be unwatchable without the laughs.

AstonRep company member Derek Bertelsen helms a sharp production. The frenzied movements, the relentless dialogue, and the mounting gore build toward the climax like a street battle ballet played for one last punchline. Occasionally I found the dialogue hard to understand. I think this was primarily due to the fatiguing nature of so much yelling. For long stretches it feels like everyone’s voices are turned up all the way.

John Wehrman is unpleasantly convincing in the unsympathetic lead role. He’s so completely “Mad Padraic” that it’s tough to imagine him ever playing a decent human being. This is a winning ensemble. They are charged with manifesting only the most regrettable, damnable aspects of human nature and appear to do so effortlessly, inhabiting their despicable characters with ease. Most importantly, their comic timing amidst all the mayhem and depravity is spot-on. (Raymond Rehayem)