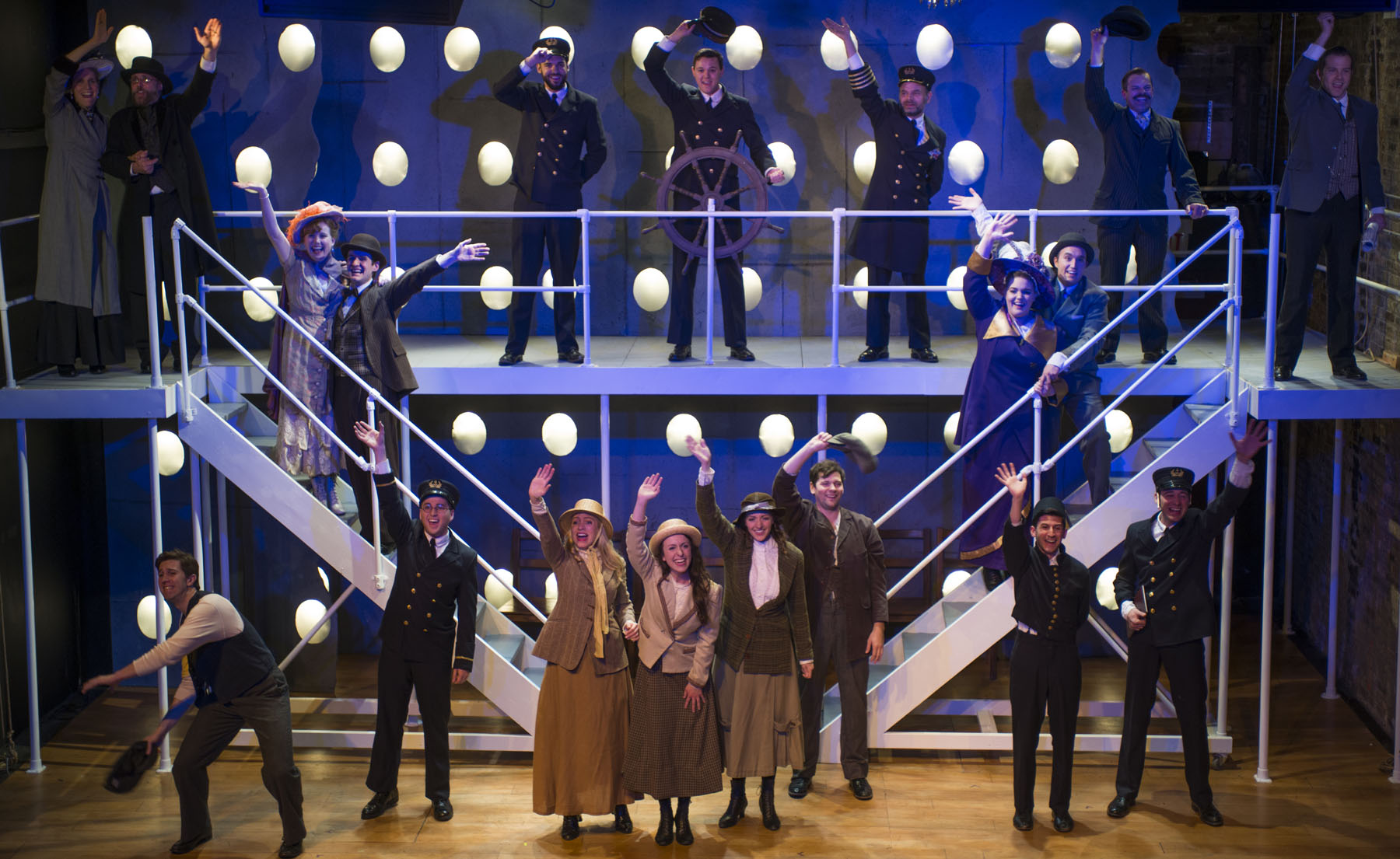 Someone at the money-making end of the performance rights for the Maury Yeston/Peter Stone musical “Titanic” has come up with more room in their pockets than seemed appropriate, and arranged for a “new, intimate” re-working of the musical’s epic tale of oceanic disaster to make it possible for companies who can’t budget for entire herds of actors, a full orchestra and an onstage ocean liner that can disappear and then return for the finale to afford to mount the piece, and give an acceptable rendering of its story-and-song so “Titanic” needn’t go the way of the almost un-producible “Sunset Boulevard.”

Griffin’s production does much with little. There is no pretense of a boat. They make do with a high platform, two moveable sets of stairs, and a ship’s steering wheel. The lack of spectacle allows the audience to focus on the collapse of the class system when the overzealous and the under-focused leadership of the vessel allow it to crash into an iceberg. And the music, of course. Yeston can spin a lush melody with his particular branding; on the hearing of two phrases, three at the most, one can usually name a song as Yeston’s. Yet each soaring moment is uniquely tied to a character and a situation.

Griffin’s mostly young cast grabs these tunes by their talented throats, and you can almost smell the pleasure they’re experiencing at the opportunity to perform in a musical that was once out-of-reach. The six ladies in the cast do yeoman work, covering multiple women’s roles and harmonies against the fourteen men beautifully bellowing around them. I have no choice but to believe that every musical theater tenor in the greater-Chicago area is appearing onstage this season because, no matter their true voice category, the men in this show maintain the high register that Yeston has used for the mariners, suggesting the pitches and rhythms that sailors would have used to shout to each other over the sound of the ocean’s waves, with evident vocal technique and apparent ease. And those six ladies make them earn their pay, balancing them in the all-hands-on-deck moments of the score that never fail to thrill.

Justin Adair (Barrett), already a Jeff Award-winner for his performance of Fabrizio in “The Light in the Piazza,” was in breathtaking voice when I saw the show, using his glowing instrument to both glower at his class-defined, coal-shoveling duties, and to float the marriage proposal he dictates to Royen Kent (Bride), heart-rending as the introverted wireless operator who has delivered the repeated iceberg warnings, to no avail. Eric Lindahl (Andrews), Peter Vamvakas (Smith) and Scott Allen Luke (Ismay), the trio of malcontents who share responsibility for the catastrophe, deliver in spades. And the Strauss’ (Emily Grayson and Sean Thomas) provide an anchor of well-fired love that tells as large a tale as the shipwreck. (Aaron Hunt)